Sit Down and Shut Up: Pulling Mindfulness Up By Its Buddhist Roots 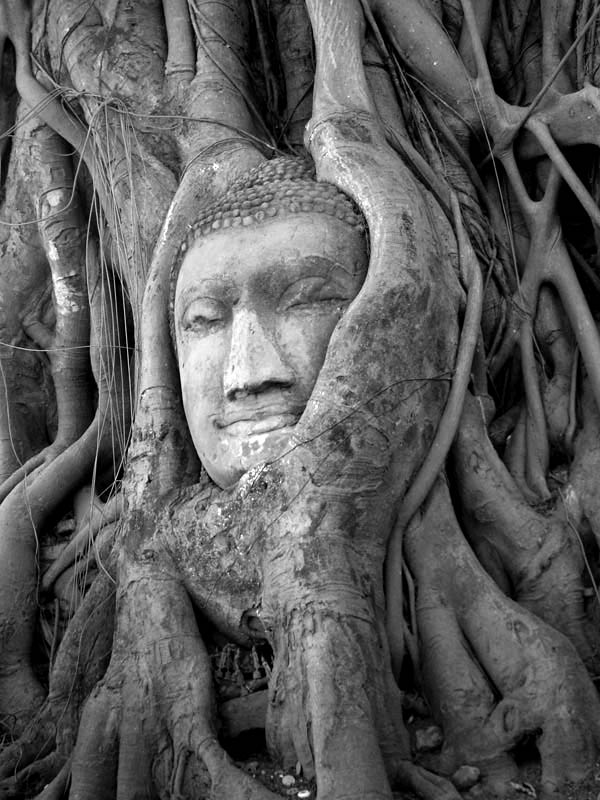 If mindfulness has gone corporate, then Wisdom 2.0 is its annual shareholder meeting. The yearly conference hosts tech royalty alongside media mavens like Arianna Huffington and Russell Simmons. Eyes may close for a meditation session, but a different ritual, perhaps even older, is perpetually enacted: see and be seen.

A couple of years ago, in a headline-making action, protesters leapt on the conference stage and unfurled a banner demanding an “eviction-free San Francisco.” The protestors were talking about physical displacement, but I’d argue that a kind of spiritual gentrification was also getting underway at Wisdom 2.0. As the recent glut of best-selling books, trend pieces, and celebrity testimonials attest, the mindfulness industry shows no sign of a slowdown. Apple has even built a mindfulness tool—reminding users to “breathe”—for its newest Apple Watch.

The rise of corporate mindfulness has rendered Buddhism far whiter and wealthier than it has ever been. For some immigrant Asian Buddhists and other politically engaged practitioners, the trend is reminiscent of the divorce of yoga from its religious roots. Viewed this way, the adoption of Buddhist practices into executive suites and government offices seems like a textbook case of cultural appropriation.

Proponents of mindfulness, of course, don’t see it this way. They claim that mindfulness is simply the tradition’s newest iteration. But as mindfulness saturates the culture, it has become the public face of Buddhism for many Americans.

What, if anything, gets lost in translation? And to whom does it matter?

The roots of mindfulness

Any conversation about the appropriation of Buddhist practices is difficult, because as the tradition spread—from the Indian subcontinent, and across the globe—it always adapted to host cultures. Buddhism absorbed Chinese religion when it spread to China, Tibetan religion in Tibet, and so on.

But mindfulness—what we think of as “meditation,” as opposed to prayer or ceremonial observance, for example—does have deep roots in the tradition. The Pali word sati, which can be translated as mindfulness, is frequently used in Buddhist scripture. (The noun comes from the verb sarati, meaning “to remember,” and alternative translations for sati include “remembrance” or even “collectedness.”)

Sati is just one part of a much larger set of practices and traditions. Specifically, it’s the seventh element of the Noble Eightfold Path, which is itself one part of the body of teachings known as Buddhist dharma, or religious doctrine. And dharma is just one of what are called Buddhism’s three jewels; the other two are the Buddha and the sangha, or monastic community.

As such, mindfulness makes up a small segment of the immense ethical, philosophical, institutional and ritual latticework that constitutes the totality of Buddhist practices, which themselves vary widely from place to place and era to era.

The modern emphasis on mindfulness and meditation is a fairly recent phenomenon. Historian Eric Braun notes that lay meditation did not begin in earnest until an early-twentieth-century anti-colonial movement among Theravada Buddhists in Burma. Before then, meditation teachings remained the province of monks and nuns. The monastic setting ensured that meditation practices took place in a community of aspirants abiding by a common code of conduct and observing a shared set of rituals. While deemed necessary for liberation, meditation practices like mindfulness were not sufficient. The accompanying rules and relationships were just as important.

Modern-day mindfulness takes this twentieth-century shift to lay meditation one step further, sanctioning meditation as a technique developed in the midst of worldly life. In previous generations, mindfulness “was surrounded by lots of other things,” said Mushim Ikeda, a Buddhist teacher at the East Bay Meditation Center in Oakland, California. “We’ve taken out one thing and we’re applying it to reduce stress, to increase performance.”

Once extracted from this communal context, mindfulness becomes a catch-all (and a cure-all). Want to relieve stress, get more sleep, perform better at work, have better sex, and actually pay attention to that elaborate breakup story your friend is telling you? Just meditate. Mindfulness-Based Stress Reduction (MBSR) techniques, pioneered by medical professor and former Buddhist practitioner Jon Kabat-Zinn, have spread from hospitals to offices to the halls of Capitol Hill.

But these practices can diverge, at times in very deep ways, from traditional understandings of sati.

Thanissaro Bhikkhu, an American Buddhist monk who deploys encyclopedic knowledge of the sutras in his cultural commentary, has pointed out crucial differences between traditional and modern (Western) mindfulness. “The Buddha himself defined sati as the ability to remember,” he writes, whereas contemporary teaching vivifies the breath as something continually discovered anew. The traditional focus on remembrance draws upon a practitioner’s experience in cultivating the technique. But for modern-day meditators, instructed in the benefit of practicing just five minutes per day, this appeal to long-cultivated expertise means little.

The aims of contemporary mindfulness are very different, too. “The way mindfulness is practiced, it’s not necessarily Buddhism,” said Reverend Toshikazu Kenjitsu Nakagaki, president of the Buddhist Council of New York. “It’s used to improve business. So the purpose is fundamentally different.”

Do these differences matter? Things change. In fact, there may be no better two-word summary of Buddhist thought and history than that. “Buddhism has gone through many, many transformations from India to China to Japan,” said David McMahan, a scholar of Buddhism at Franklin and Marshall College. McMahan’s 2008 book, The Making of Buddhist Modernism, analyzes how Buddhism changed as it took hold in the West during the nineteenth and twentieth centuries. “Now it’s changing again,” he said.

This change, though, comes within a context of colonial expansion and widespread cultural theft, argued Katie Loncke, the co-director of the Bay Area’s Buddhist Peace Fellowship (BPF), a social justice-oriented organization. “In the legacy of colonialism in which the U.S. was founded and still very much find ourselves, it’s not surprising that we see repeated patterns of cultural appropriation,” she said. “Even within these very cherished contemplative practices.”

When it comes to contemporary mindfulness, this appropriation aligns with the dominant neoliberal mode of economic, social, and political life. Instead of challenging the status quo, mindfulness merely enables the ensuing preoccupation with social climbing and career advancement.

In other words, mindfulness is a technique that asks Americans to quite literally sit down and shut up.

Zen Buddhist teacher David Loy and management professor Ron Purser call this form of the technique “McMindfulness.” “Rather than applying mindfulness as a means to awaken individuals and organizations from the unwholesome roots of greed, ill will, and delusion,” they write, “it is usually being refashioned into a banal, therapeutic, self-help technique that can actually reinforce those roots.”

McMahan, however, warns against the idealization of a mythic, pristine form of the religion. “I would be cautious about contrasting mindfulness with some kind of absolutely pure, past Buddhism in which there was no conception or concern with material well-being or financial reward,” he said.

This article was originally published at Religion Dispatches, and is partially reproduced here without the permission of the author, who is not affiliated with this website or its views.

2 Responses to Sit Down and Shut Up: Pulling Mindfulness Up By Its Buddhist Roots