Resounding in the Heart 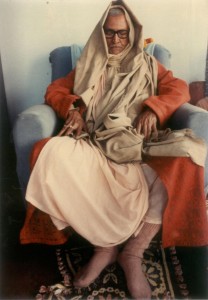 Our Guru Maharaja, Srila Bhaktisiddhanta Saraswati Thakura liked book preaching. He called it the brihat mridanga. When a mrdanga resounds, it invites the people around it, “Come to hear the chanting of the divine name.” Similarly, books go from man to man, house to house, informing people, “These things are occurring. Come and join.” The ‘sound’ made by books however, works more efficiently than the sound by made the mrdanga. So our Guru Maharaja called them the brhat mrdanga. The inundation upon people made by books is more intense and more perfect than that made by the mrdanga.

A gentleman who read the Gaudiya wrote an article in praise of our Guru Maharaja:

“Generally souls are sleeping under the influence of ignorance, and to rouse them you send your weekly paper, the Gaudiya, from door to door. It is the messenger of Vaikuntha, the infinite world, and it pushes open doors to be heard. It loudly calls the people, ‘Utha re utha re bhai ara ta’ samaya nai Krishna bhaja’ bale uchchaihsvare: There is no time! Awake! Arise! Come to the Absolute! Why are you are sleeping in ignorance? Such a great prospect waits for you. Come and serve Krishna!’ That is the Gaudiya’s news.”

Prabhupada founded this weekly newspaper, the Gaudiya, and even a daily newspaper, the Nadia Prakash. Madan Mohan Malaviya, the majority leader of India at the time, remarked, “What is this? A daily religious newspaper?” Prabhupada answered him, “In this mundane world there are so many daily papers. We are told that in America there are not only morning  and evening papers but newspapers published every hour. In Vaikuntha there is a thousand times more news than there is in the mundane world. So why is printing one daily paper about Vaikuntha a wonder? Thousands of daily papers about Vaikuntha may be continued, that much news comes from Vaikuntha. The news of Vaikuntha can over flood this mundane world. Vaikuntha is infinite, and this world is finite. When a ray from the infinite world comes to the finite world, what can it do?”

Later Madan Mohan Malaviya said to Prabhupada, “Every village should have a center for your activities.” Our Guru Maharaja answered, “What do you say? I want to establish a temple of the Lord in every man’s heart.”