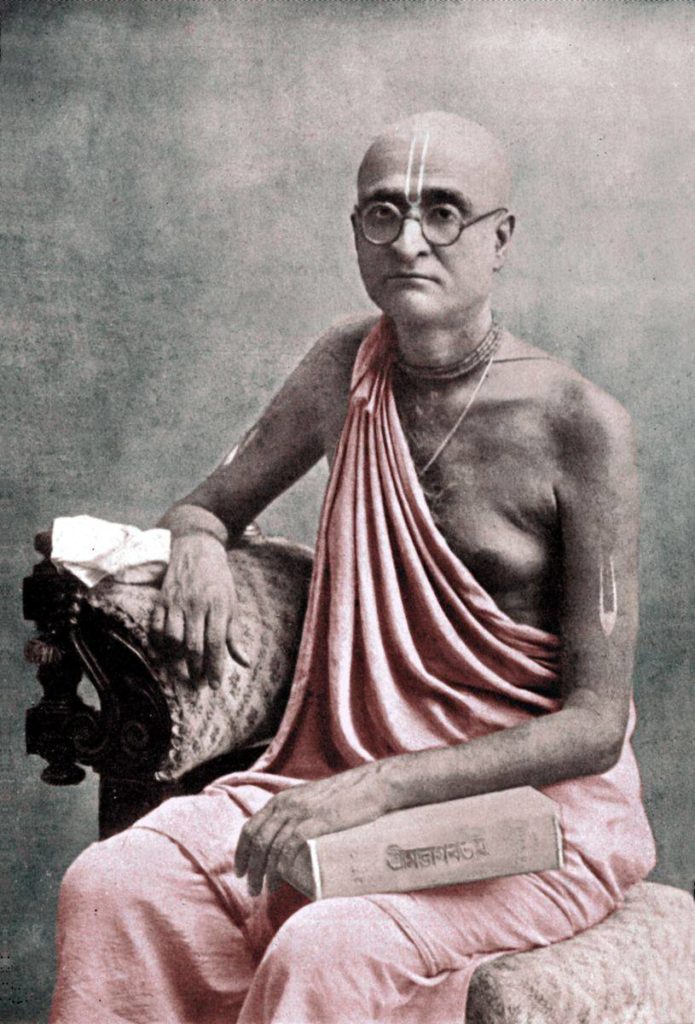 On the eve of his disappearance, Srila Bhaktivinoda Thakura instructed his son, Srila Bhaktisiddhanta Sarasvati Thakura, to preach the teachings of the six Goswamis and Lord Chaitanya far and wide. He also requested that Siddhanta Sarasvati develop the birthsite of Lord Gauranga. Mother Bhagavati Devi disappeared a few years later. Before her passing away, she held the hands of Sarasvati Goswami imploring him to preach the glories of Lord Gauranga and His dhama. Accepting the instructions of his parents as his foremost duty, Sarasvati Goswami took up this task of preaching with intense enthusiasm and vigor.

With the passing away of his father and his spiritual master a year later, Siddhanta Sarasvati continued the mission of Lord Chaitanya. He assumed editorship of Sajjana-tosani and established the Bhagwat Press in Krishnanagar. Then in 1918, in Mayapur, he sat down before a picture of Gaurakishora dasa Babaji and initiated himself into the sannyasa order. At this time he assumed the sannyasa title Bhaktisiddhanta Sarasvati Goswami Maharaja.

Once on the day preceding Janmastami in the Bengali month of Bhadra, Sarasvati Goswami was engaged in bhajan at Mayapura but was feeling disturbed as he was unable to arrange for milk to be offered to the Deity. As soon as he began to think in this way he chastised himself: “Have I thought like this for my own sake? That is wrong.” Because it was the monsoon season, Lord Chaitanya’s birth site was covered with water and was totally inaccessible except by boat. However, that afternoon, one milkman turned up there wading through water and slush carrying a large quantity of milk, ksira, butter, cottage cheese etc. Apparently, a zamindar named Harinarayana Cakravarti, guided by Lord Caitanya, had sent the milkman with all the items.

After offering everything to the deity, the devotees partook of the prasada joyfully. Sarasvati Thakura was surprised to see so much prasada and the Devotees explained what had happened. After taking prasad Siddhanta Sarasvati humbly appealed to the Lord: “I am very sorry to have caused You so much trouble. Why did I have such an uncalled for thought? To fulfill my desire You have inspired another person and arranged to send these things.”

The world was amazed to see the supernatural power of Sarasvati Goswami. Many educated persons from highly respectable families were attracted to him and thus dedicated themselves to the service of Lord Gauranga. Between 1918 and 1937 Bhaktisiddhanta Sarasvati founded sixty-four suddha bhakti mathas at the following places: Navadvipa, Mayapura, Calcutta, Chaka, Mymensingh, Naryanaganj, Chittagong, Midnapore, Remuna, Balasore, Puri, Alalanatha, Madras, Covoor, Delhi, Patna, Gaya, Lucknow, Varanasi, Hardwar, Allahabad, Mathura, Vrindavana, Assam, Kuruksetra, and outside India in London, and Rangoon. Sarasvati Goswami instituted Gaurapadapitha at Nrsimhacala on the top of the Mandara hill, and at several places in South India. He initiated twenty-five highly educated persons into Bhagavata Tridandi sannyasa.

He published the following periodicals on suddha bhakti in different languages:

In addition he published a large number of Vaishnava books. In fact, he heralded a new era in the spiritual world. He deputed well-disciplined tridandi sannyasi‘s to preach the message of Lord Gauranga all over the world. For six years he continued to supervise this preaching work and when he found that his mission had attained its goal, to a reasonable extent, he decided to pass into the eternal service of Lord Gauranga.

A few days before his disappearance Bhaktisiddhanta Sarasvati called his foremost disciples and showered his blessings upon all his devotees. He gave them the following instructions:

With the utmost enthusiasm preach the message of Rupa Raghunatha. Our ultimate goal is to become a speck of dust touching the lotus feet of the followers of Rupa Goswami. All of you remain united in allegiance to the spiritual master (asraya-vigraha) in order to satisfy the senses of the Transcendental Entity of Non-Dual Knowledge. Do not give up the worship of Hari even amidst hundreds of dangers, hundreds of insults or hundreds of persecutions. Do not become unenthusiastic upon seeing that the majority of people in this world are not accepting the message of Krishna’s sincere worship. Never give up the glorification of the topics of Krishna, they are your own personal bhajan and your very all and all. Being humble like a blade of grass and tolerant like a tree, constantly glorify Hari.

In the early hours of the day on January 1, 1937, Bhaktisiddhanta Sarasvati Goswami passed away.