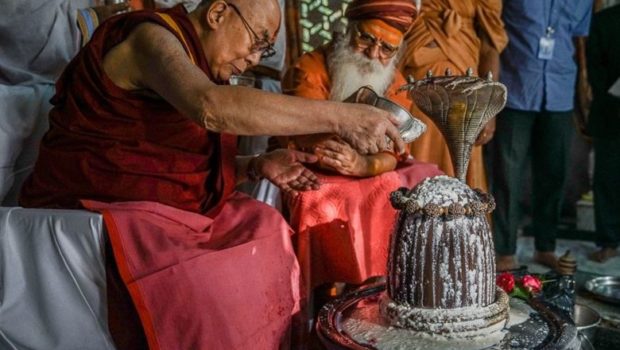 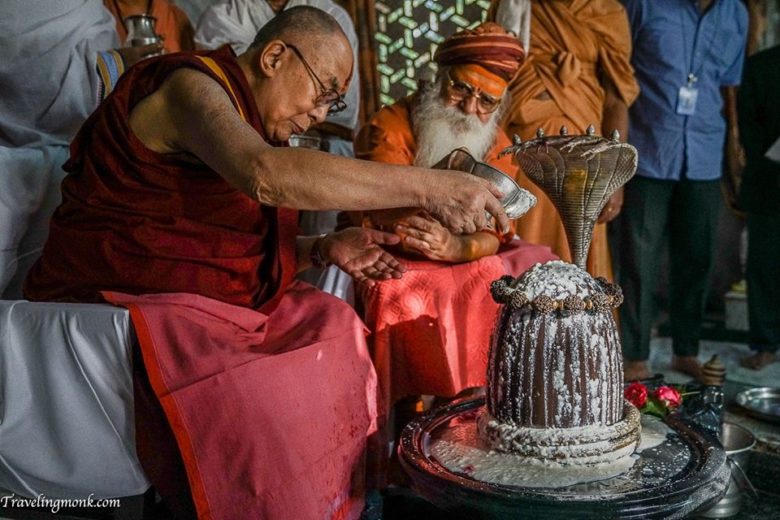 By Jagadananda Das, originally published at Vrindavana Today on March 22, 2017.

One of the most respected individuals in the entire world, a spiritual man whose integrity has rarely been impugned — an almost impossible feat in today’s hypersensitive world — His Holiness the Dalai Lama came to Braj once again to visit his friend, Sant Swami Karshni Gurusharananda Maharaj.

For two days the Karshni Udasin Ashram was effulgent with the love between the two men, symbolizing in sort the historical love between Tibet and India. And this was indeed one of the subjects that pervaded the two public audiences that the two saints gave, one for the press on Monday and the other to a larger audience yesterday.

At this second conference, many of the most prominent spiritual leaders from Vrindavan and Mathura were present, as well as some from outside Vrindavan also.

A friendship of holy men from different religions

On Wednesday, the Dalai Lama participated in a number of rituals that included abhishek of the Shiva Lingam, homa in the yajna shala and finally the unveiling of a beautifully designed brass Buddha statue in a garden next to the peepul tree that he himself had planted as a gesture of good will several years ago.

I asked Maharaj Shri how the two of them had become such good friends. The 75-year-old Maharaj said that they had been at a similar gathering of saints and sadhus at the Kumbha Mela several years ago. Maharaj Shri corrected the Dalai Lama on some point of philosophical misunderstanding about a school of Hindu philosophy. This started a dialogue between the two of them on the relationship between India’s two great gifts to the world’s religious and mystical topography.

The two men share a love for the common heritage of the two nations, especially for the Sanskrit language. Tibet was one of the places where many of the original Sanskrit texts of the Buddhist tradition were preserved and give an insight to the debates that were taking place between different factions of Buddhism as well as the Hindu traditions. The culture of the great Buddhist monasteries was also preserved in Tibet. Maharaj Shri quoted the Sanskrit saying several times that vade vade jayate tattva-bodhah, “through discussion and debate one refines one’s knowledge of the truth.”

One of the many things that were repeated by the two spiritual leaders was that religions all have the purpose of creating and fostering harmony. Whatever externals of belief and custom differ from one society or culture to another are secondary when you understand their true purpose.

Hinduism and Buddhism have many common features, especially in the practical basics of the inner-directed life of self-abnegation and meditation, spiritual discourse and promotion of the spiritual virtues. Nevertheless, the Dalai Lama even jokingly said that although India has always been Tibet’s guru, geographically it can be seen as India’s head. Maharaj Shri responded that a guru is always overjoyed when his disciple exceeds him in knowledge, spiritual insight and accomplishment.

Throughout both public appearances, the Dalai Lama constantly rubbed the Swamiji’s hand and even occasionally pulled on his beard in an affectionate gesture. He called him his “spiritual brother.”

In his Tuesday discourse to a larger audience and in the presence of a large number of saints from Vrindavan and elsewhere, H.H. the Dalai Lama spoke about his wide-ranging ambitions for the last part of his life.

He said that all religions have love as their purpose and people by nature are empathetic. Science has now found, he said, that empathy is a more fundamental human trait than individualism and competition. Facing the world’s problems today means that we have to exercise this aspect of our being. This is what all religions are about, and more than any other religion, Buddhism shares this attitude with Hinduism. Tibetan Buddhism is perhaps the most faithful of all to the Sanskrit Buddhist tradition that existed in India before the invasion of the Muslims. But the basis of all religions is the development of spiritual virtue exemplified by the paramitas in Buddhism and the yamas

But, he said, I wish to teach compassion to the people of the world in a secular way, so that people will understand that this is a scientific way to peace and the fulfillment of human life.

He also spoke at length about Tibet’s susceptibility to global warming. Water levels are going down and glaciers are melting. The Himalayas are the third largest reservoir of ice in the world after the North and South Pole and its melting will have devastating effects on the entire Southeast Asian region, including India, since it is its principal source of water. So he has put this among his priorities for the last part of his life.

In answer to the question about Buddhism and meat eating, particularly in India where the cow is held as sacred, and especially so here in Gokula, how are you supporting cow protection? the Dalai Lama said that though it is true that in Tibet the geographical conditions make a vegetarian diet very difficult to maintain, outside of Tibet, he has ordered all monasteries under his guidance to serve only vegetarian food.

Though individuals may eat according to their habits, no congregational activity should have non-vegetarian foods served. He said he was promoting vegetarianism because he does not believe that one can properly cultivate compassion and at the same time cause unnecessary harm or pain to any creature. This is the principle of ahimsa, which he follows.

The Dalai Lama in Braj

It is well known that Karshni Swami Gurusharanananda is one of the most respected saints in the Braj area, which is rich in masters of the bhakti yoga tradition. Tomorrow I will try to summarize a bit the history of this ashram, which is a unique and interesting branch of devotional practice to Krishna. Maharaj Shri is himself a great scholar and an entertaining and persuasive speaker. His friendship with the Dalai Lama is a testament to his various good qualities. He does not see the existence of many religions as a zero-sum game where only one group can be right and all the rest condemned.

The Dalai Lama himself repeatedly said, if you stick to the essence of religion’s purpose, then you won’t go wrong. Religion is not about dividing but about uniting humanity in peace. Where there are disagreements those should be recognized as dealing primarily with secondary matters. So the baseline of cultivating compassion and friendship to all others is the essence of human evolution.

The cloud of religious sectarianism covers our understanding of the true purpose of religion. Braj is the abode of Prema Bhakti. Let the Dalai Lama’s understanding inspire the people of Braj and the devotees who come here from around the world to pay homage to the religion of Prema Bhakti so that they participate in the movement to promote the science and culture of peace, harmony and love everywhere.