On Vaishnava Culture and Customs 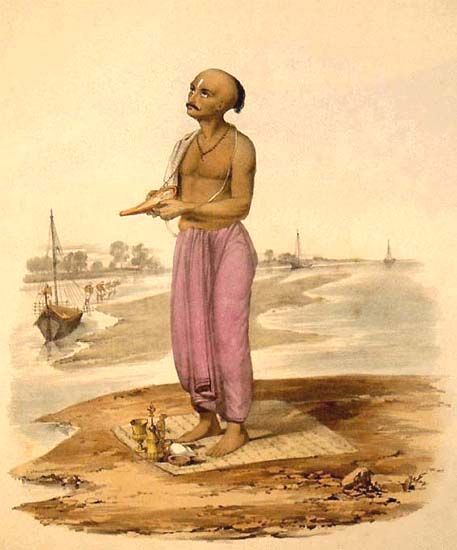 By Satyanarayana Dasa, originally published at the Jiva Institute.

Question: Previously, was there any distinction of dress between Gaudiya Vaishnavas and the regular population in India, and for the different varnas? What did people generally wear? There seems to be no mention of grihastha dress in shastra, only sannyasa garb.

Answer: There is no such thing as Vaishnava dress specifically. It is Indian dress with Vaishnava identification-marks: a specific tilak and Tulasi kanthimala. Men also wore shika, but it was not specific only for Vaishnavas, but basically for every male member of Hindu society. It was shaved only when one took Advaitavada sannyasa.

Previously, before India had contact with the West or Western dress, there was no other dress code besides the normal dhoti for males, and sari and different types of skirts for females. Mostly, men did not have an upper garment except for a chadar, also called an uttariya or anga-vastra. Rich people and royal people wore different type of shirts called angarakha (or angaraksaka in Sanskrit, lit. protector of limbs, something like the bagal-bandi from the Vrindavan area). Muslims introduced the kurta. Men wore various types of turbans. The style of dhoti, sari, skirts and turbans varied from region to region and also from varna to varna. Most of these dresses did not need tailoring, and could be used by people of different sizes. They were easy to wash. In fact, the word dhoti implies a cloth that is washed after wearing it once. These dresses were especially suitable for warm climates.

Thus there is almost no specific mention in Smriti shastra, such as Manu Smriti, about a dress code for grihasthas. One thing it does mention is not to have two kacchas, (kaccha is the part of the dhoti or sari tucked in the back). This implies that grihasthas wore dhotis with a kaccha, and not lungistyle, as is the case with sannyasis and babajis. It is also forbidden to worship the deity without a kaccha. Thus you will see that sannyasis do not do worship in South Indian temples. The pujaris are grihasthas.

Almost all dress code is only specified for non-grihasthas, i.e., brahmachari, vanaprashtha and sannyasi.

Question: Sometimes the question is raised, “Why do we have to follow Indian Culture. God is not dependent on any culture, why do we have to put on tilaka, a dhoti and shave our heads?”

“God” means Paramatma. Bhagavan is beyond God. Paramatma is a general manifestation of the Absolute Reality, and Bhagavan is very specific. Therefore Bhagavan has a specific culture which is related to his life and activities.

In his prayers to Krsna, Brahma said that Krsna was pleased with Putana because she was dressed as a gopī. She did not have the bhava of gopī, she was merely dressed as a gopī (SB 10.14.35). We shouldn’t misconstrue that simply wearing a specific dress constitutes the sādhana to attain Bhagavan, but this does show that Bhagavān has preferences.

Putana incidentally dressed in a way that pleased Bhagavan. Pleasing him was not her intention. Therefore his mercy on her is astonishing, and she is an exceptional example. The common thing is to intentionally try to please Bhagavan. That is bhakti sadhana. When bhakti is there, then one naturally does what is pleasing to Bhagavan. (anukulyena krsna anu shilanam BRS 1.1.11)

We may think of Bhagavan’s culture as “Indian culture,” especially those who are not Indian may think this way, but really, Krsna appeared on a part of the earth that was not called “India” at the time. Now we have divided the earth into so many countries. Even in recent history India alone has been divided. About 65 years ago, Pakistan was part of India and about 45 years ago, Bangladesh was part of Pakistan, but now the people of Pakistan and Bangladesh do not think that Krsna was born in their country, and they consider Indian culture foreign. Their forefathers did not.

Similarly, once upon a time, the whole earth was one unit, as can be seen from the shape of different continents. According to the Puranas also, the whole earth was known as Bharata Varsha, which is the official name of India. At that time, if somebody lived on earth he was part of the whole world. There was only one culture. Later on, it got bifurcated into so many parts and now we consider the culture of one country “foreign.” Thus we think that the culture in which Krsna is born is “Indian culture,” but in truth, there was a world culture at that time. There was no such thing as “India.”

And there were no other major religions at that time – neither Christianity, Islam nor Buddhism. And even in these religions, their traditional dress very much resembles traditional Indian dress. All the cultures of the world had similar simple dresses, basically cloth wrapped around the body, whether in Greece, Egypt or Israel.

Furthermore, Vaishnavas accept that Krsna-lilaas eternally unfolding in many different universes. That means the dress Krsna wore and the culture he lived in is not “Indian” – it is his. It is not that in our universe he happened to appear near Delhi so he wore dhoti, but in another universe, He wears jeans or something else. Like the Sun, which looks the same no matter what country you see it from, Krsna appears in different universes and different historical periods, but He always wears the same dress. So it is not Indian dress, it is His own eternal dress. It is not Indian culture, but His own culture.

Question: Srimad Bhagavatam says (11.14.3): “Those who give up the effort for attaining perfection on the path of jnana (brahman realization) and just bow down to you with their mind body and speech by hearing your pastimes described in the scriptures, though remaining in their social position (sthane sthita), they conquer you, O Krsna, who are unconquerable by anyone in the three worlds.”

What do you think about this sthane-sthita principle? And what would you recommend for Vaishnavas to wear?

Answer: I agree with the sthane sthita principle. I consider Osho as the most rebellious and unorthodox guru. Yet, even he had a dress code for his sannyasis. So sannyasis should always follow the dress code. Grihasthas can dress in whatever is convenient for them to function in the society. However, I will recommend that while doing puja in the temple one should put on the traditional Indian dress. And if time and circumstances permit, one should wear traditional Indian dress to worship one’s personal deity in one’s own home. It has some merit in it. While going out one can change into the dress accepted in the local society.

Question: When in the 10th Canto it says that Krsna liberated Putana because she came in the dress of a gopi, does that imply that only Krishna’s devotees dressed like gopis and that there were no other women in Krishna’s times not devoted to him who wore this kind of dress?

Answer: No. Putana’s dress reminded Krishna of the gopis. Any non-devotee gopi would have reminded Him of the gopis. So dress also has some role to play and this must be recognized. By this, I am not saying that Western devotees should go around in dhotis, but they should know its value and wear it whenever they can. There is no need to rebel against it, as seems to be the case sometimes.

Question: Is Hari Bhakti Vilasa a book for Gaudiya Vaishnavas or is it more for outsiders? I am asking because it is full of varnashrama dharmic rules, while real bhakti is supposed to be beyond those rules. In essence, Hari Bhakti Vilasa seems to be aropa siddha bhakti.

Answer: Hari Bhakti Vilasa gives principles for Vaishnavas in general. It is a Vaisnava smriti not limited to Gaudiya Vaishnavism. It is not talking about aropa siddha bhakti. It gives principles for people who want to practice pure bhakti. However, it is assumes that one has varnashramabackground and therefore it may appear that it is speaking about varnashrama or aropa siddha bhakti. It should be noted that not everything it prescribes is applicable to Gaudiya Vaishnvas. It is a textbook. As with any textbook, one has to learn from one’s own teacher or school which principles are applicable and which are not, and to which extent. It is a book for practical principles which may need to be adjusted according to the circumstances of the practitioner.

39 Responses to On Vaishnava Culture and Customs