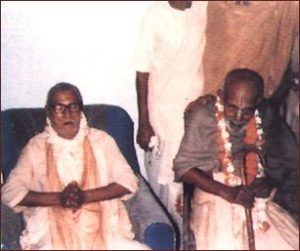 The following is a glorification of Srila Bhakti Raksaka Sridhara Maharaja written by his godbrother, His Holiness Srila Bhakti Promod Puri Goswami Maharaja, Founder-Acarya of the Sri Gopinatha Gaudiya Matha and President of the World Vaisnava Association.

Srila Bhakti Raksaka Sridhara Deva Goswami Maharaja exhibited profound natural and intrinsic spontaneous genius in the field of Sanskrit language, literature, and thought. Thus a natural affinity was seen in him for composing articles and prayers in Sanskrit and reading Sri Gita, Sri Bhagavata, and all other lofty scriptures that have spontaneous relations with the nature of his divine original self.

In light of his divine knowledge, qualities, devotional services, realization in the field of pure devotional siddhanta, and his having more advanced access in the opulent, mysterious world of transcendental devotional service, along with limitless devotional qualities and the extraordinary capability of retaining (storing up) the superexcellencies of the devotional practices and preaching campaigns by special blessings of Srila Prabhupada,1 he is always most worshipable to this insignificant jiva soul as one of my siksa gurus.

We have especially seen the most brilliant example of Pujyapada Sridhara Maharaja’s service in visrambha mood (with firm, wholehearted confidence, intimacy, and faith in Sri Guru). He has been unendingly blessed by our Paramaradhya Srila Prabhupada for his grand preaching campaign showing the superexcellency of the teachings of Sri Sri Guru and Gauranga. By the grace of Sri Guru, the most efficient analogies, logical arguments, and expert systems and techniques of establishing the susiddhanta (the higher truthful devotional conclusions) would always appear in his heart with effulgent spontaneity, enabling the convincing refutation of opposing opinions and assertions.

Thus Srila Prabhupada was always glad to see the presence of Srila Sridhara Maharaja in any conference or sophisticated debating assembly. Srila Prabhupada highly praised the quality and poetic beauty of his many invaluable compositions. Every word of his numerous prayers composed about his Gurudeva and Lord Gaurasundara are full of profound devotional resonance and clearly demonstrate his intense love of Sri Guru and Lord Gaurasundara. His explanation of Sri Brahma Gayatri , the mother of all Vedas, signifying devotional worship unto Srimati Radharani, is deeply appreciated by those fortunate, intelligent devotees who are aware of the relishable beauty of pure devotional service. I am bereft of the proper language to elucidate the profound meaning of Sri Gayatri as expressed by Pujyapada Maharaja in the depth of realization, which is that sublime Sri Radha dasya or Sri Radha pada-dhyana, the exclusive devotional servitude to Srimati Radharani. Therefore, it can only be presented and understood through his own illustrious transcendental language and by his exclusive divine grace. This deepest meaning of Sri Gayatri has been nobly established by the message emanating from his lotus lips and by the exultant mood radiating from the core of his heart.

I have no adequate words to express the pain of separation in the absence of such a rare personality and exalted devotee of the Lord. It was Srila Prabhupada who brought to us his own associate, our Pujyapada Maharaja, and blessed us with that great fortune of having his association. I pray imploringly to him that he generously forgive all my material mortal conceptions about him, whether known or unknown, and be gracious with me, fulfilling my life by giving me the eternal servitude of Srila Prabhupada. Many of his eastern and western disciples offer me respect since I am his godbrother, but I am very unqualified to receive that respect. Still, I am very fond of them because they are all blessed with the fortune of having shelter beneath the lotus feet of that exalted divine master, and I especially request all of them to take precaution against having any mortal, material misconceptions about him.

During his lifetime the wealth of ever-new, beautiful, glorious hari-katha which emanated from the lotus lips of Pujyapada Sridhara Maharaja captured my heart. Regrettably, I could not offer him proper respect at that time, and today the acute feeling of the absence of that magnanimous, well-wishing friend of mine makes my heart heavy with the pain of separation. He is Srila Prabhupada’s own associate and he remains by his lotus feet in the nitya-lila, deeply pleasing him by his charming devotional services. Now it is my earnest prayer that he graciously take me over there and engage me in the service of Srila Prabhupada.

On the day before his disappearance, Paramaradhya Sri Srila Prabhupada requested and heard from the lips of Pujyapada Srila Sridhara Maharaja that invaluable song “Sri Rupa-Manjari Pada” composed by Srila Narottama dasa Thakura, thereby indicating the rightful entry of Pujyapada Sridhara Maharaja into the Sri Rupanuga bhajana the intimate devotional service in the esoteric line of Sri Rupa Manjari. Srila Prabhupada has given us great hope by saying that the inner flow of the line of Srila Thakura Bhaktivinoda, the foremost associate of Sri Rupa Prabhu and the personification of the direct potency of Lord Gaurasundara, will never be obstructed. Only Sri Gurudeva can enable us to attain that all-accommodating lofty Sri Vraja prema, as distributed by the unparalleled Sriman Mahaprabhu, by uplifting us onto that plane of divine rasa. Srila Prabhupada has directly defined Pujyapada Sridhara Maharaja as Sri Rupanuga Bhakti Raksaka, the Guardian of Pure Devotion in the line of Sri Rupa and thus also the guardian of the pure devotional line of Srila Thakura Bhaktivinoda. Therefore, this lowly servitor of servitors prays for his grace. How will I be able to attain that most high Sri Vraja prema without submission and devotion unto him whom Srila Prabhupada has directly and eternally absorbed into the Rupanuga family of Srila Bhaktivinoda Thakura?

From the very beginning of Pujyapada Sridhara Maharaja’s matha life, his adherence to the devotional services of his own guru, Srila Prabhupada, was super-resplendent. His calm, quiet nature and bright, beautiful, divine appearance accompanied by full simplicity, solemnity, and complete freedom from egoistic emotions would always attract our hearts. He would so superbly explain each and every word of Sri Gurudeva in such an intensely devotional, melodious way that we would be charmed. Although he was born in a high-class, wealthy family, was handsome, and became famous for his scholarly achievements, no trace of false pride was ever found in his life or character. He was never known to give trouble to anyone in any way and never felt himself to be the loser when taking troubles from others. He was completely free from any tinge of malicious anger, which is opposed to pure devotional service. He would always heartily try, with great patience, to resolve any problems arising from the conflicts or disputes between his godbrothers. A natural, simple, and most cordial behavior was always seen on the part of this spotless personality setting an exemplary standard for the brahmacaris and sannyasis of our mission.

He is an exalted devotee of the Supreme Lord, Sri Gaurasundara, and is always beautified with the affection of his guru vargas, Sri Guru, and the Vaishnavas. He possesses pure devotional qualities and benevolently blesses all with the divine message and matchless wealth of Srila Prabhupada, thereby fulfilling his desire.

He is all-glorious, forever glorious, everywhere.