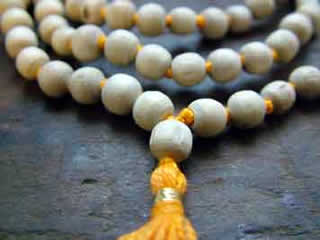 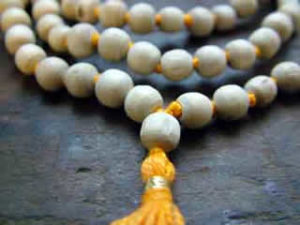 Supplication of the spiritual mind is called smaranam. Yet before we can consider the process of supplication, we must first determine what makes a mind spiritual. Sri Caitanya told Sanatana Goswami that at the time of initiation the disciple receives a spiritual body. (Cc, Antya 4.192-3) If one takes this as a reference either to the sadhaka deha or the siddha deha, the conclusion is the same. Once a devotee is initiated, his body, and therefore his mind as well, become spiritual in proportion to his surrender. With the watering of the seed of bhakti through hearing and chanting (sravanadi), as one’s consciousness becomes pure (suddha citte), one can remember Krishna constantly, thus awakening prema (karaye uday). This smaranam or remembrance is the perfection of life, ante narayana smrti, and it is thus the sum and substance of all prescriptions and prohibitions, smartavyam satatam visnor vismartavya na jatucit sarva viddhi niseda syur etayor iva kinkara.

Smaranam follows hearing (sravanam) and chanting (kirtanam). It is nourished by them, and it is their fruit. In all five citings in the Bhagavatam in which hearing, chanting, and remembering are mentioned together, the three appear in this order: hearing, chanting, and remembering. Narada glorifies Krishna before the Rajasuya sacrifice with these words, sravanat kirtanad dhyanat (SB 10.70.43). Sage Prabuddha replies to King Nimi sravanam kirtanam dhyanam(smaranam) (SB 11.27). Prahlada tells his father that the best thing he has learned is sravanam kirtanam visnoh smaranam (SB 7.5.23). Sukadeva Goswami at the outset of his speech advises Maharaja Praiksit srotavyau kirtitavyac ca smartavyaa (SB 2.1.5), and again in the second canto he reiterates the same, srotavyau kirtitavyac ca smartavyo (SB 2.2.36).

Hearing brings knowledge of the teachings and acquaintance with the lilas of Krishna. It awakens sraddha and a taste or liking for Krishna. One can not proclaim his faith without having heard about Krishna from an authority. Only after hearing can one chant. Nor can one remember Krishna without having first heard about him. Hearing thus precedes chanting and remembering. Chanting solidifies that which one hears and thus awakens and further nourishes remembering. In order to appreciate this development, we can view it as a movement from passive to active engagement, the latter being a developmental stage of the former.

The activity of chanting develops from passive hearing. Hearing is also an activity, and hearing attentively more so. Yet when hearing gives rise to chanting, even the most active or attentive hearing is passive in comparison to hari katha. While chanting is active in comparison to hearing, it only appears to be more active than remembering. Smaranam for Gaudiya Vaisnavas is not passive contemplation, rather active meditation and visualization that the activity of chanting lends support to. Through smaranam supported by kirtanam the devotee well acquainted with the parameters of rasa tattva “creates” through his meditation “his own reality” within the eternal lila of Radha-Krsna. When this perfectional stage is reached, the supplication of the spiritual mind is complete.

Sri Jiva Goswami has subdivided smaranam into five developmental stages: general smaranam, dharana, dhyana, drhuvanusmriti, and samadhi. He also speaks of various types of smaranam in an order of progression from nama smaranam, to rupa smarnam, to guna smaranam, and ultimately lila smarnam. As there are various stages as well as types of smaranam, there are stages of eligibility for engaging in smaranam corresponding with its various stages and varieties.

The Bhagavata cautions us that those without love for the Personality of Godhead should not meditate on his personal form (SB 2.2.14). Such persons are advised to meditate on the universal or virtual form of the God (visva-rupa) in which his form is imagined in terms of the mountains, seas, sun, and moon, etc. Acarya Visvanatha goes further in commenting on this verse, stating that those whose intelligence is still impure should not even meditate on the four-armed form of Visnu. Visvanatha Cakravarti Thakura clearly defines the import of purification as cessation from sex indulgence, yatha yatha dhis ca sudhyati visaya-lampatyam tyajati, tatha tatha dharayed iti citta-suddhi-taratamyenaiva dhyana-taratamyam uktam. And even a superficial acquaintence with Bhagavad-Gita makes it clear that meditation in general requires eligibility, a pure heart.

For those who are sufficiently purified meditation on the form of the God is appropriate, yet this too in graduated steps. The Bhagavata says one should meditate on the deity form of the God first, and in this also beginning with meditation on the deity’s lotus feet. From the feet of the deity one’s meditation rises gradually to the smiling lotus face of God. This meditation on God’s form corresponds with the cantos of the Bhagavata itself, the tenth canto of which corresponds with his lotus face. It is in the tenth canto that the lilas of Krishna are discussed, and thus lila smaranam is the highest form of meditation. When one has progressed to the stage of dhyana, one can begin to effectively engage in lila smaranam.

Prior to reaching the stage of dhyana, devotees of Krishna engage in general smaranam consisting of researching information about Krishna and concentrating one’s mind on Krishna by withdrawing it from thoughts of sense gratification. At these stages, devotees concentrate on the deity form of God and research the details of the manifest lilas of Krishna recorded in the Bhagavata. They also practice nama smaranam, chanting Krishna’s name on their japa mala (rosary) of 108 beads.

Within the holy name of Krishna, all of his lilas are contained, as are necessarily his form and qualities. With minimal success in nama smaranam devotees see the form of God with purified eyes. That is, they recognize the deity manifestation of God in the temple to be nondifferent from Krishna himself. Thus they engage in the service of the deity with great enthusiasm and remember him throughout the day, dreaming about him at night. Meditation on the form of God is called rupa smaranam. At the same time, this class of devotee is qualified to study the Bhagavata, particularly the tenth canto in which the pastimes of Krishna’s manifest lila are detailed. Such devotees study Krishna’s pastimes therein in conjunction with the commentaries of the acaryas and under the direct guidance of their guru. Gradually they become fully acquainted with Krishna lila in all of its details. While so engaged, they continue to practice withdrawing the mind from material sense indulgence, saturating their senses with objects in relation to Krishna. When the mind is concentrated on Krishna, his divine qualities begin to manifest in such devotees’ purified minds. This is called guna smaranam.

In the stage of dhyana, the devotee of Krishna meditates successfully on the lilas of Krishna. Yet this too is done in stages. First, he or she meditates on a particular pastime through its corresponding mantra. This is called mantra mayi upasana. The dominant diksa mantra of the Gaudiya sampradaya is the astaksara gopal mantra. Successfully meditating on this mantra, the sadhaka envisions the diety of the mantra and his surrounding paraphernalia and associates relative to the his acquired taste (ruci) and relationship with the diety awakened through successful meditation on the mantra. Success in this stage turns to svarasiki meditation, or spontaneous meditation that takes one from lila to lila. Gradually this meditation becomes fixed. This is called dhruvanusmriti. From this stage one enters samadhi.

The heart of smaranam is love, for that which we love, we remember.That which we remember during our life is what our life is about, and it is that existence of ours, our bhava, that determines our remembrance at the final hour of our life, and thus our next life as well.