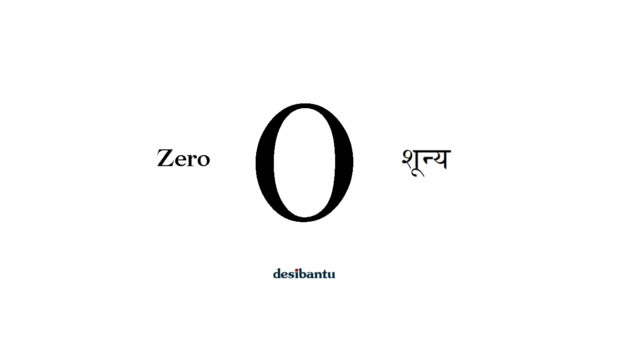 How India Gave Us the Zero

In Gwalior, a congested city in the centre of the India, an 8th-Century fort rises with medieval swagger on a plateau in the town’s heart. Gwalior Fort is one of India’s largest forts; but look among the soaring cupola-topped towers, intricate carvings and colourful frescoes and you’ll find a small, 9th-Century temple carved into its solid rock face.

Chaturbhuj Temple is much like many other ancient temples in India – except that this is ground zero for zero. It’s famous for being the oldest example of zero as a written digit: carved into the temple wall is a 9th-Century inscription that includes the clearly visible number ‘270’.

The invention of the zero was a hugely significant mathematical development, one that is fundamental to calculus, which made physics, engineering and much of modern technology possible. But what was it about Indian culture that gave rise to this creation that’s so important to modern India – and the modern world?

I recalled a TED talk by renowned Indian mythologist Devdutt Pattanaik in which he tells a story about Alexander the Great’s visit to India. The world conqueror apparently met what he called a ‘gymnosophist’ – a naked, wise man, possibly a yogi – sitting on a rock and staring at the sky, and asked him, “What are you doing?”.

“I’m experiencing nothingness. What are you doing?” the gymnosophist replied.

“I am conquering the world,” Alexander said.

They both laughed; each one thought the other was a fool, and was wasting their life.

This story takes place long before that first zero was inscribed on Gwalior’s temple wall, but the gymnosophist meditating on nothingness does in fact have a connection to the digit’s invention. Indians, unlike people from many other cultures, were already philosophically open to the concept of nothingness. Systems such as yoga were developed to encourage meditation and the emptying of the mind, while both the Buddhist and Hindu religions embrace the concept of nothingness as part of their teachings.

Dr Peter Gobets, secretary of the Netherlands-based ZerOrigIndia Foundation, or the Zero Project, which researches the origins of the zero digit, noted in an article on the invention of zero that “Mathematical zero (‘shunya’ in Sanskrit) may have arisen from the contemporaneous philosophy of emptiness or Shunyata [a Buddhist doctrine of emptying one’s mind from impressions and thoughts]”.

In addition, the nation has long had a fascination with sophisticated mathematics. Early Indian mathematicians were obsessed with giant numbers, counting well into the trillions when the Ancient Greeks stopped at about 10,000. They even had different types of infinity.

Hindu astronomers and mathematicians Aryabhata, born in 476, and Brahmagupta, born in 598, are both popularly believed to have been the first to formally describe the modern decimal place value system and present rules governing the use of the zero symbol. Although Gwalior has long been thought to be the site of the first occurrence of the zero written as a circle, an ancient Indian scroll called the Bhakshali manuscript, which shows a placeholder dot symbol, was recently carbon dated to the 3rd or 4rd Centuries. It is now considered the earliest recorded occurrence of zero.

Marcus du Sautoy, professor of mathematics at the University of Oxford, is quoted on the university’s website as saying, “[T]he creation of zero as a number in its own right, which evolved from the placeholder dot symbol found in the Bakhshali manuscript, was one of the greatest breakthroughs in the history of mathematics. We now know that it was as early as the 3rd Century that mathematicians in India planted the seed of the idea that would later become so fundamental to the modern world. The findings show how vibrant mathematics have been in the Indian sub-continent for centuries.”

But equally interesting are the reasons as to why the zero wasn’t developed elsewhere. Although the Mayans and Babylonians (and many other civilisations) may have had a concept of zero as a placeholder, the idea is not known to have developed as a number to be used in mathematics anywhere else. One theory is that some cultures had a negative view of the concept of nothingness. For example, there was a time in the early days of Christianity in Europe when religious leaders banned the use of zero because they felt that, since God is in everything, a symbol that represented nothing must be satanic.

So maybe there is something to these connected ideas, to the spiritual wisdom of India that gave rise to meditation and the invention of zero. There’s another connected idea, too, which has had a profound effect on the modern world.

The concept of zero is essential to a system that’s at the basis of modern computing: binary numbers.

This article was originally published at BBC, and is partially reproduced here without the permission of the author, who is not affiliated with this website or its views.