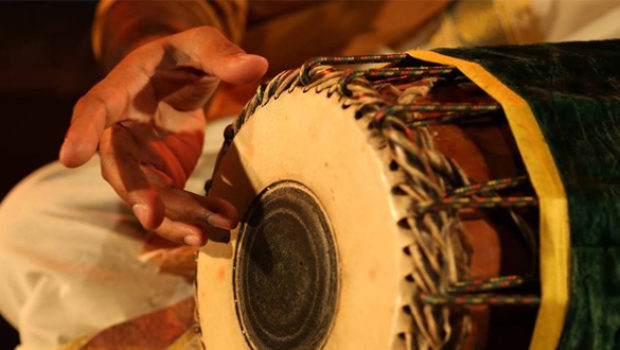 The Science Behind the Music of Mridangam

By B. Vijayalakshmi, originally published in the Deccan Chronicle.

Taking a cue from Nobel laureate C. V. Raman who did an in-depth study into the harmonics of mridangam and published papers in 1920, eminent percussionist Dr. Umayalpuram K. Sivaraman and scientists Dr. T. Ramasamy and Dr. M. D. Naresh have done extensive research and written a book Musical Excellence of Mridangam. It will be released by Vice President Venkaiah Naidu and the first copy will be received by Governor Banwarilal Purohit at the CLRI auditorium in the city on Tuesday evening.

It all started in the early 20th century when some western scientists interested in music said Indian percussion instruments don’t have harmonics. Their comments left a lasting impact on C. V. Raman who decided to understand the physics behind mridangam and find out the innate beauty and aesthetics of percussion instruments. With his keen observations and study, sans modern gadgets, he found that mridangam produces five harmonics that contribute to the musical quality of the instrument.

He felt the acoustical knowledge of Indians of yore had made these instruments more nuanced and musical. He published several noteworthy articles. Several other scientists took an interest in the findings of CV Raman and did further research.

Speaking to DC, Umayalpuram K. Sivaraman said, “We three of us took up this research work on mridangam some 15 years ago. We have studied every aspect of mridangam, like harmonics, leather, hide, skin and black patch in our book. We have discussed the need for travel- friendly mridangam. We have also explored the issue of phytosanitary conditions of leather to help music artistes traveling abroad. The beauty of our research work can be described as a happy wedlock of science and sastra.”