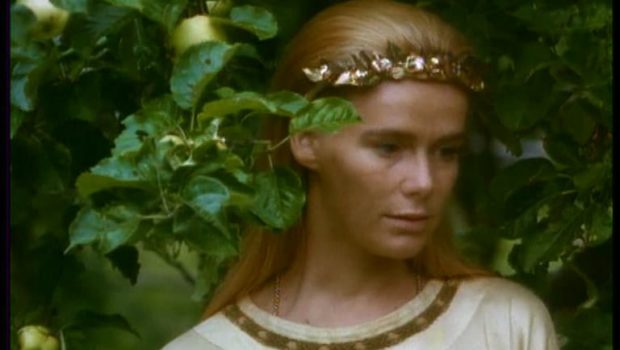 By Leah Libresco Sargeant, author of Arriving at Amen and Building the Benedict Option, originally published at First Things.

For some time, whenever I recommended Kristin Lavransdatter to friends I kept forgetting about the plague. I first read Sigrid Undset’s novel—a three-volume story of one woman’s life in 14th-century Norway—several years ago, not long after my conversion. I remembered the ending of the epic as tremendously satisfying, and one of the most peaceful I had encountered.

Then, I reread it with a passel of people I had recruited for an online book club. As we approached the final chapters, there was page after page of bloody incident. The plague ravages the convent where Kristin goes to live out her widowhood. Kristin risks her life confronting a group of men who intend to carry out a violent sacrifice to stave off the sickness. She drags a stinking corpse on a litter in order to give the abandoned woman burial.

In the plague we are now living through, most of us are not yet experiencing scenes of this type. The streets in my town are nearly empty, and the shops are quiet and dark. I contacted all my neighbors to make a mutual aid listserv for our street, but so far, all anyone has needed of me is a page of stamps, which I dropped off for an older couple who had entered preemptive quarantine after returning from abroad.

It’s hard to see the heroism in staying home. If social distancing works, we will have saved lives indirectly, never knowing who we helped. One animation tried to make absence tangible by showing a network of infection, and highlighting individuals in the growing, branching chain. One figure is labelled “This person worked from home,” another “This person didn’t go to that BBQ.” Because they stayed in, they are marked as uninfected, and each person downstream of them is suddenly freed of the virus they would have passed on.

Without the image, it’s hard to make the connection. After all, when someday our children ask us “What did you do during the coronavirus pandemic?,” it won’t seem exciting to tell them, “I moved my book club to videochat.” It’s more exciting to imagine that the sacrifices asked of us will be dramatic and romantic.

But it’s no surprise to Christians that we should value the invisible economy of grace over more worldly signs of effort and accomplishment. We are a people who believe that cloistered sisters, praying privately, have a powerful effect on the world. We are a people who believe that prayer, fasting, and humiliation are as much a part of our response to a pandemic as work on antivirals.

Each of us does the work God has prepared for us. And at present, a number of people who are used to power and dramatic, visible forms of activity are being called unexpectedly to the cloister of the home. Nearly all of us are being called to the kind of patient, steady work (caring for children, bringing groceries to the elderly) that is rarely counted in visible measures like GDP.

It is the kind of work Kristin Lavransdatter does for most of the book, before her sacrifices in the plague. Her life, written as an epic, is not exceptional for her day. She makes an ill-considered marriage to a passionate and unsteady man. She raises her children and manages her farm. She endures disease, but so did many others of her time.

I kept forgetting the grotesqueries of the plague in the final chapters because it had been eclipsed by the very end of the novel—when Kristin dies, painfully, but in the peace that passes understanding. On her deathbed, her final thought is of God’s faithfulness:

She was certain that God had held her firmly in a pact which had been made for her . . . and in spite of her willfulness, in spite of her melancholy, earthbound heart, some of that love had stayed inside her, had worked on her like sun on the earth, had driven forth a crop that neither the fiercest fire of passion nor its stormiest anger could ever completely destroy.

God offers Kristin a gift by casting her into the path of the unburied woman. He gives her an opportunity for her stubbornness and her willfulness to be turned to his service, as she holds to her duty to bury the dead. But he was always beckoning her, as much in the quiet steps of her pilgrimage to enter the convent as in the violence of the pestilence.

If we struggle to serve God in small things, he may be generous enough to invite us into his service in dramatic ways, casting us into the path of others whose need is so urgent and piteous as to draw us out of ourselves. Or he may have mercy on us by taking away our worldly strengths, so we cannot cling to them and neglect him.

But before we rely on that rough tenderness, we should hold to the work that is already before us. We are in the epic of the everyday that makes up most of Kristin Lavransdatter, and our Author is not neglecting us in this period of quiet vigil keeping.

This article was originally published First Things, and is reproduced here without the permission of the author, who is not affiliated with this website or its views.