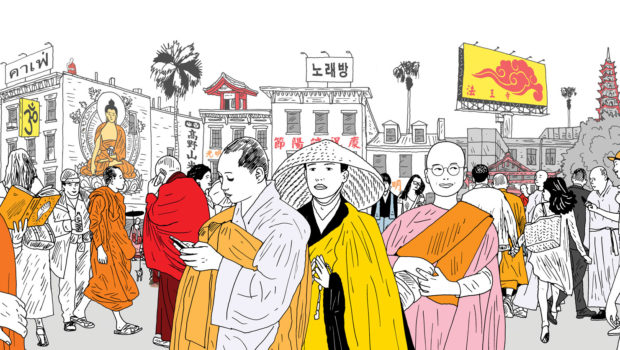 The Land of Many Dharmas

While the vast majority of the approximately 500 million Buddhists in the world live in Asia, one fascinating aspect of Buddhism in America is that, for the first time in nearly the entire 2,600 years of Buddhism’s history, all the major Buddhist denominations in the world today coexist in one country. In many large American (and Canadian) cities there are more different kinds of Buddhism than are found anywhere in Asia, including Bangkok, Taipei, Seoul, and Kyoto. In the Los Angeles area, for example, close to 100 different Buddhist traditions—representing virtually all the world’s main denominations—find a home. Whereas in Asia, Buddhists from different countries have rarely known, or even known of, each other, in Los Angeles you may find temples with roots in Thailand, Korea, and Vietnam located near each other, sometimes even on the same street. For me, this trend provides a new and exciting opportunity for all Buddhists to learn from and better understand each other.

All Buddhist schools teach the path to awakening, seeing that we are all jewels. But different traditions present the teachings differently. In America, where there are so many denominations, it can be hard to gain a full picture of what American Buddhism even looks like. To help understand this, I find it useful to categorize the various kinds of Buddhism into four main groups.

The first group consists of older Asian American Buddhist communities. They started their temples in the mid to late 1800s and are mostly of Chinese and Japanese origin. Today, because they are mostly third-, fourth- and fifth-generation Americans, their temple activities and services are held in English.

Since the mid 1960s, newer Asian American Buddhist communities have formed in the United States as more people have immigrated from Cambodia, Korea, Laos, Myanmar, Sri Lanka, Taiwan, Thailand, Vietnam, and elsewhere. Because these communities still have a large percentage of first-generation members, temple activities and services are often held in their respective native languages. However, English is being used with increasing frequency as the second and third generations come of age. For newer and older Asian American Buddhist communities alike, temples serve as hubs for both religious and cultural life.

The next group consists of those who were for the most part not born into Buddhist families but converted to Buddhism as adults and whose main practice is sitting meditation. They are predominately of European descent, though there is a substantial and increasing membership of people of color. In general terms, members of this third group belong to Zen, Theravada (particularly vipassana, or insight lineages), or Tibetan traditions, which are centered on meditation practices. The immense popularity over the past decade or so of mindfulness practices has definitely increased the numbers belonging to this group.

The fourth group is made up of convert Buddhists whose main practice is chanting. The majority of this group are affiliated with Soka Gakkai International, or SGI, which is a denomination of Nichiren Buddhism. Like that of other Nichiren Buddhists, the main practice is reciting the Odaimoku, “the great sacred title” of the Lotus Sutra, which in SGI is pronounced “Nam-myoho-renge-kyo.” One of the largest Buddhist organizations in America today, SGI is also the most racially diverse organization, with a membership that includes large numbers of Asian American, Latino, African American, and white participants.

This article was originally published at Tricycle: The Buddhist Review, and is partially reproduced here without the permission of the author, who is not affiliated with this website or its views.

One Response to The Land of Many Dharmas