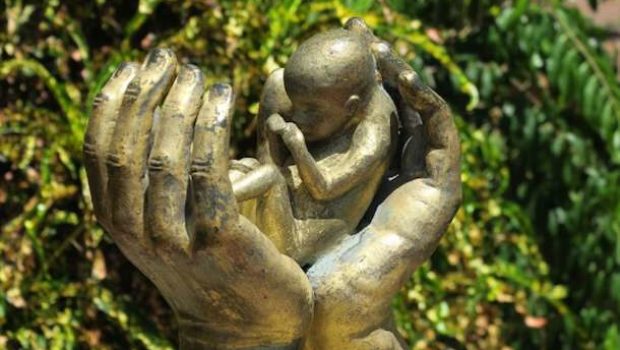 Is There a Buddhist View on Abortion?

By Sallie Jiko Tisdale, author of Advice for Future Corpses (and Those Who Love Them): A Practical Perspective on Death and Dying and The Lie About the Truck: Survivor, Reality TV, and the Endless Gaze. This article was originally published by Tricycle in October 2021.

Traditional Buddhist literature says little about abortion. Scholars parse the few words offered carefully. How, when, and what makes a human being? Is an embryo a human or an “intermediate being?” Is it between a human and an animal? Is a human determined by the development of limbs, the emergence of sexual organs, or the ability to breathe? Giulio Agostini, a scholar of the Vinaya, or Buddhist code of ethics, notes in the Journal of the International Association of Buddhist Studies that various Buddhist sources say a human is formed at conception, in the fifth week, during the second month, the seventh week, eleventh week, third month, fifth month, and nineteenth week of pregnancy. Nevertheless, the conclusion of orthodox Buddhist scholars has long been that a human being appears at the moment of conception. Because human birth is a rare and precious gift, to deprive a being of the opportunity is a grave mistake. Therefore, a one-day-old embryo must be accorded the same protection as living human beings.

I confess to a degree of impatience with such a conclusion. The arguments are sometimes circular and often dogmatic. Traditional Buddhism is anti-birth, based in a celibate and solitary life outside the family. Sexual desire is said to turn the wheel of samsara, and procreative sex is a greater transgression for a monastic than nonprocreative sex. The uterus is a disgusting place and babies begin to decay at birth, yet women are told to sacrifice themselves for the sake of the embryo. Above all, this fundamentalist view is bloodless, aloof, far from the complications and dilemmas of daily life. A human body is so rare and precious that we must protect it from the day of conception? So why aren’t these scholars making babies? Wouldn’t the highest form of practice be to create more opportunities for human birth?

Modern Western and Mahayana Buddhist views of abortion are somewhat more flexible. They tend to combine utilitarianism—creating the greatest good for the greatest number—and virtue ethics—basing action on a set of moral virtues. I can find myself in the utilitarian camp sometimes. From any relative view, keeping abortion safe and legal reduces harm and allows for the most good. (I try not to forget that doing good is one of the slipperiest of slopes.) I want to make choices from a morally defensible position, one based in justice, autonomy, kindness toward others. Again, keeping abortion safe and legal seems to support these values.

But there is dogmatism here, too. In common Mahayana arguments, abortion may be the lesser of evils, but it is still an evil. All involved must accept long-standing negative karmic consequences. The person choosing an abortion can be viewed with compassion, but it is compassion tinged with judgment.

In the introduction to the often-cited 1999 volume, Buddhism and Abortion, the editor, Daniel Keown, notes that “the views of women are quite well represented” in the book. Eight out of ten chapters were written by men. Even today, much of what is written about abortion and Buddhism is by men, reflecting a widespread imbalance in scholarship and cultural power, and in Buddhist scholarship and authority in particular. The irony, of course, is all this effort by men is on a topic directly affecting the ability of women to engage equally in scholarship, culture, and authority. The Dalai Lama once said, “I think abortion should be approved or disapproved according to each circumstance.” But he didn’t say who should do the approving. Amy Paris Langenberg, a Southeast Asian Buddhist scholar, writes on the Institute of Buddhist Studies’s blog, Ten Thousand Things, “To neglect the issue of gender is to assume that all stakeholders approach the issue of abortion with the same vital concerns and existential pressures.” They do not. The Buddha said that we need to rely on our own experience to know what is true, that it is proper to doubt what we are told. “Do not go upon what has been acquired by repeated hearing,” he says in the Kalama Sutta (AN 3.65) . “Nor upon tradition; nor upon rumor; nor upon what is in a scripture; nor upon surmise; nor upon an axiom; nor upon specious reasoning.” We must investigate the words of dharma, and test them against our lives. Here are some of the tests I’ve taken: I have been pregnant twice, given birth once and had a miscarriage, adopted two children, and worked in an abortion clinic.

I liked working at the clinic. It was intellectually challenging and emotionally satisfying. Every day I was able to help people through a difficult time. No one danced in. No one danced out. But every day I was able to relieve suffering. I saw women struggling with addiction, carrying fetuses with profound defects, living in poverty. I saw women in menopause and girls pregnant before they had regular periods. We cared for people whose health was at risk from a pregnancy, who had been abandoned or raped. I met people who were ignorant of their own biology, in denial about a pregnancy and in denial about terminating a pregnancy. But mostly I met people who were sad—a little sad or a lot—and clear-eyed about the rightness of their choice.

Killing is an act that is always wrong, according to the precepts. But the precept is not merely about physical killing. It is a precept of ahimsa, non-harming. At the clinic, I was reminded on a daily basis that people don’t “get pregnant.” People are impregnated, by accident, by intent, and sometimes through violence. Forced pregnancy kills spirit, joy, freedom, opportunity, and hope. Abortion can be a rescue.

I believe that reproductive choice for all people is fundamental to the Buddhist view, that supporting safe, legal abortion is a dharmic stand. Equality must be among the highest of our values—not only the equality of all to realize enlightenment, but to have equal chances to enter the practice. Human birth is precious because it allows us to meet the dharma consciously and engage in the discipline freely. A human life is the opportunity to confront suffering and karma, and change the course of both. If we condemn slavery because it denies the equal personhood of a being, we have to condemn forcing people to give birth.

Senate Bill 8, recently passed in Texas, indulges in the delusion that pregnancy and pregnant people exist in a vacuum. Buddhism teaches interrelationship, the conditioned and dependent nature of all things. Nothing exists in a vacuum. We can’t talk about abortion without talking about racism, poverty, addiction, misogyny, climate change, and overpopulation. I am not saying that abortion has no moral or karmic consequences because every act has consequences. So does choosing not to act. Systemic failures abound in our society. If you are uncomfortable with abortion, what are you doing to alleviate the burdens that lead people to make that choice? What are you actually doing to reduce this suffering?

Michael Barnhart, a scholar of Buddhist philosophy, examined the traditional arguments about when a human being comes into existence, and concluded that “rebirth is only the rebirth of elements, not of individuals.” This assertion (which appears in The Oxford Handbook of Buddhist Ethics) neatly encapsulates my experience. Pregnancy is the fluid process of becoming. A pregnancy is not separate; it is part of the body. What is developing is as incapable of survival away from that body as a severed ear or foot would be. The embryo may contain all the parts of a sentient being, as an ear and foot contains all the DNA of the larger body. But neither is a whole being.

We must always rely on our own investigation to know what is true. Every human life will require difficult, ambiguous choices. Abortion is not a special case. I know that abortion can be undertaken with all the compassion, love, and generosity with which we welcome a wanted baby. It is an act that can increase happiness even as it decreases future suffering, and allow a person to be healthier, stronger, more whole. Abortion is health care, and people’s suffering will only be compounded as long as it is anything short of safe and legal.

This article was originally published by Tricycle and is reproduced here without the permission of the author, who is not affiliated with this website or its views.

6 Responses to Is There a Buddhist View on Abortion?