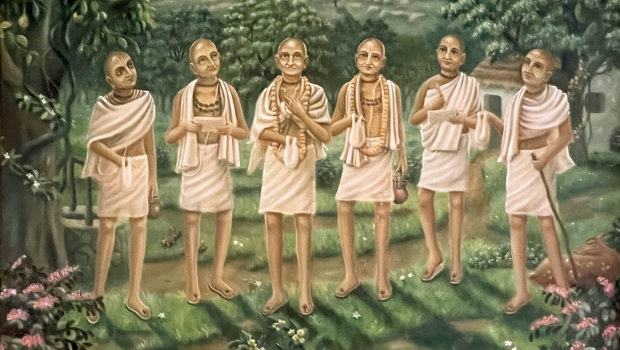 The Simultaneous Inherency and Bestowal of Bhakti—Part 1: The History of the Debate

Is bhakti bestowed upon a jīva by God or a devotee at some point in material time or is it already part of the jīva’s constitutional nature, albeit covered by māyā? Or can it be both, in which case bhakti is inherent but needs to be bestowed because the jīva is covered by māyā and thus lost to his true nature?1 Bhaktivinoda Ṭhākura expressed the third option (that it is both), and following his lead, so have those in his parivāra. During the time of Bhaktivinoda Ṭhākura, the well-known Rādhā Ramana Carana dāsa Bābāji, among others, agreed with Bhaktivinoda Ṭhākura’s interpretation of Jīva Gosvāmī’s Sandarbhas concerning this topic. For example, he wrote, “Similarly, one has only to remove the impurity of the heart by means of sadhana-bhakti to see and feel that prema is already there.”2 That said, not all Gauḍīya parivāras embraced this understanding. Nonetheless, there is no evidence I’m aware of that anyone objected to Bhaktivinoda Ṭhākura’s interpretation during his own time. And as we shall see, the Ṭhākura clearly derives his interpretation of Jīva Gosvāmī from previous ācāryas such as Baladeva Vidyābhūṣaṇa and his Madhva heritage, which the Brahma-Madhva-Gauḍīya lineage is derived from in some respects. Furthermore, as I will show in my fourth article, Bhaktivinoda Ṭhākura’s interpretation runs through the other four Vaiṣṇava sampradāyas as well.

Thus, we should be clear that non-inherency versus simultaneous inherency and bestowal is not a debate in which Jīva Gosvāmī and the rest of the Gauḍīya sampradāya are on one side of the divide and Bhaktivinoda Ṭhākura and his parivāra stand alone on the other side. Although the example that I gave in the previous paragraph refers to the time of Bhaktivinoda Ṭhākura, the same holds true after his disappearance. For example, David L. Haberman states in his groundbreaking work within academia, Acting as a Way of Salvation, that when researching his book in Vraja he came across two distinct perspectives embraced by Gauḍīya sadhus in regard to the siddha-deha: inherent and non-inherent.3 It is notable that he was referring to parivāras other than that of Bhaktivinoda Ṭhākura.4 Dr. Mahanamabrata Brahmachari, who travelled to the United States from India in 1933, did a PhD thesis called Vaiṣṇava Vedānta: the Philosophy of Śrī Jīva Gosvāmī for the University of Chicago and became a mentor of Thomas Merton. In this deeply philosophical dissertation, the author presents an implicitly inherent and bestowed perspective.5 In a more recent academic publication, Barbara A. Holdrege, in her well-researched and insightful Bhakti and Embodiment, also implicitly takes an inherent and bestowed perspective regarding the meditative siddha-deha of the aspiring devotee.6

However, when Jīva Gosvāmī’s Sandarbhas were first published in English, some devotees in parivāras outside the Bhaktivinoda parivāra questioned, based on the Sandarbhas, Bhaktivinoda Ṭhākura’s writings that state that bhakti is the jīva’s svabhāva (natural state or constitution) and particularly that the jīva’s siddha-deha is inherent within a jīva. Those within the Bhaktivinoda parivāra have mostly discounted these questions, but some have argued in support of Bhaktivinoda Ṭhākura’s position, and thus a debate has raged on for years, mostly on Internet forums. While most of those in the Bhaktivinoda parivāra have continued to support simultaneous inherency and bestowal, some have modified their positions—particularly those who have closely examined the arguments of the opposing side. For example, some have a qualified understanding of simultaneous inherency and bestowal, some have argued that bhakti is bestowed and not inherent and thus there must be a reason why Bhaktivinoda Ṭhākura preached this understanding, and a few have even left his parivāra altogether.

Furthermore, Swāmī Padmanābha held firm in emphatically dismissing the notion that bhakti could be inherent: “What we find here is a totally unclear and convoluted notion—the idea of remembering or regaining one’s svarūpa.”15 He even suggests that Bhaktivinoda Ṭhākura himself “cancels” such a possibility with his statements that bhakti is bestowed.16 Swāmī concludes by affirming: “But one thing remains beyond question: The undisputed and consensual siddhānta of the Gauḍīya sampradāya is that bhakti is not inherent in the jīva—neither physically, nor etiologically, nor teleologically.”17

Furthermore, I was rankled by Swāmī Padmanābha’s contention that he was bringing Bhaktivinoda Ṭhākura and Jīva Gosvāmī closer together by presenting “different ways of appreciating” Bhaktivinoda Ṭhākura’s understanding that were in line with Jīva Gosvāmī’s ultimate intention.18 As far as I was concerned, Bhaktivinoda Ṭhākura and Jīva Gosvāmī were already in perfect alignment, and it was Swāmī Padmanābha’s understanding that needed adjustment. Moreover, I had always found certain implications of the bestowal-only argument to be distasteful. For example, the bestowal-only argument holds that the soul has no inherent knowledge or ānanda—only consciousness and a lack of material suffering.19 Thus, essentially this understanding posits that the soul is impersonal without the bestowal of bhakti.20 It holds that the soul is simply a quantum of consciousness that powers a material or spiritual body, much like a battery that powers a car. As such, the soul does not constitutionally have any personality at all. Its personhood in the state of perfection, such an interpretation postulates, resides in the siddha-deha and its śaktis, which this theory understands to be constitutionally different than the soul. This argument further holds that the soul never actually contacts the siddha-deha directly because in this understanding such contact would cause the soul to transform. Thus, essentially the theory considers that after an eternity of wandering in the material world, the sojourn of the jīva culminates in merely identifying with something other than what it is.

It was for these reasons that I began considering how I might respond to the contention of Swāmī Padmanābha that “the undisputed and consensual siddhānta of the Gauḍīya sampradāya is that bhakti is not inherent in the jīva.”21 I thought that something that had not been done was to show how Jīva Gosvāmī establishes the inherency of bhakti in the Sandarbhas. As the bestowal of bhakti has already been shown by Swāmī Padmanābha and others, this addition would show that Jīva Gosvāmī established both inherency and bestowal of bhakti in the Sandarbhas. Such an undertaking would thus add considerable weight to the argument that Bhaktivinoda Ṭhākura was perfectly in line with Jīva Gosvāmī.

In the scriptures, there are many apparently contradictory concepts. For example, that God has form and is formless and that we are one with God as well as different from God. Statements about the inherency and bestowal of bhakti are similar: although the statements seem contradictory, you can find many instances of both. The genius of the ācāryas of Vaiṣṇava Vedānta, as opposed to the understanding of Śaṅkarācārya, is that they embrace scripture in its entirety rather than asserting that some scriptural statements cancel out other statements, as Swāmī Padmanābha did when he suggested that Bhaktivinoda Ṭhākura cancels the possibility of inherency with his statements that bhakti is bestowed.22

It took me a year to complete my undertaking. I am posting this article on the auspicious appearance day of Śrīla Jīva Gosvāmī, a perfect day to begin my humble attempt to serve the devotees by elucidating his Sandarbhas. Tomorrow is the appearance day of Śrīla Bhaktivinoda Ṭhākura, whose profound insight was the inspiration and guiding force of my writing. On this day, I will present a summary of the points I will make in the articles that will follow. I pray that my articles may please these two great Vaiṣṇavas, as well as the devotees who read this series. Please keep in mind that the Sandarbhas can be abstract, terse, and difficult to comprehend. As such, a substantial argument based on the Sandarbhas will also be similarly challenging. In this regard, as well as for any shortcomings in my presentation, I beg the indulgence of my readers.

52 Responses to The Simultaneous Inherency and Bestowal of Bhakti—Part 1: The History of the Debate