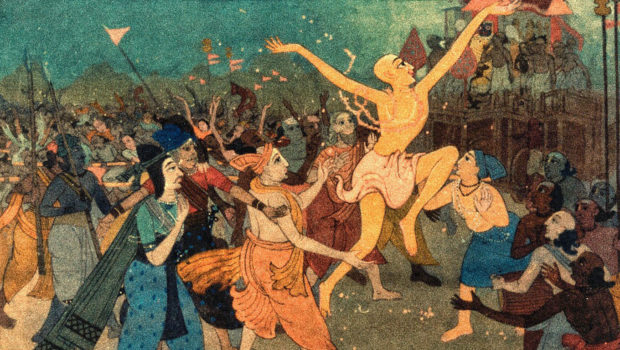 The Simultaneous Inherency and Bestowal of Bhakti—Part 6: The Search for Bliss

In the last article, I discussed how all of one’s inherent characteristics are only fully manifest in liberation and gave further support for this point by discussing the four states of consciousness that the soul can experience. In this article, I will discuss another major philosophical problem with the idea that bhakti is not simultaneously inherent and bestowed: a logical consequence is that spiritual ānanda is not the nature of the soul and that the soul searches not for bliss but rather for the absence of suffering. The reason for this is that there is no way to have spiritual ānanda without bhakti. This irrefutable fact is an inconvenient truth for those who maintain that spiritual ānanda is not the nature of the soul. This outlier position is hard to defend, and this is particularly so in Gauḍīya Vaiṣṇavism due to copious statements to the contrary.

Take, for example, what Baladeva Vidyābhūṣaṇa says in this regard in his Govinda-bhāṣya commentary to 4.4.1, which is an explanation of what the Chāndogya Upaniṣad 8.12.3 is talking about when it says that the mukta “attains its own form” (svena rūpeṇābhiniṣpadyate) and in doing so “moves about laughing and playing (krīdaṇ).” Baladeva comments, “Some say that the jīva, being self-illuminating consciousness alone, on attaining the supreme light, manifests merely a state of destruction of all suffering caused by the superimposition of prakṛti. But that is not so, because śruti states that one attains intense bliss. Rasaṁ hy evāyaṁ labdhvānandī bhavati: the jīva, attaining the Lord who is rasa, becomes blissful (Taittirīya Upaniṣad 2.7).”1

Those who say that bhakti is only bestowed and not simultaneously an eternal part of the jīva’s nature will protest that this comment says just the opposite of the jīva being bliss. “It clearly says that the bliss was attained and that due to receiving bhakti!” they will exclaim. But Baladeva Vidyābhūṣaṇa already answered this doubt. He summarized the pūrvapakṣa position thus:

(Pūrvapakṣa) It [the jīva’s svarūpa as characterized by having a form of bliss] arises as a result of sādhana since the word used is abhiniṣpatti: to attain. Otherwise, this word would be meaningless and the scriptures dealing with liberation would not be teaching a goal, for if this form [rūpeṇa] were naturally related to the ātmā, being a manifestation only, there would be no attainment, since the natural svarūpa would have been previously present. Thus the form must be achieved by practice.2

Baladeva Vidyābhūṣaṇa answers this doubt: “The jīva manifests his svarūpa on attaining the Lord since the word ‘his own’ is used. Why is this the meaning?” To which he answers, “Because of the word svena, which modifies rūpeṇa. This indicates his natural, inherent form/nature. If he were to receive a new form, the word would have no meaning, since having his own form can only be accomplished by not obtaining a new form.”3 Thus, although it seems like that which is “attained” is a new acquisition, it is actually inherent: simultaneous inherency and bestowal. The jīva, upon attaining liberation by way of the bhakti bestowed upon him, realizes its own nature, laughing and playing in rasānanda with he who is himself rasa.4

The above understanding is straightforward, yet some devotees ignore it or try to interpret it differently and force it to fit with what they consider overwhelming evidence for non-inherency. But, fortunately, the straightforward reading of Baladeva Vidyābhūṣaṇa’s commentary saves us from the awkward conclusion of such a position: that the spiritual body is merely superimposed on the ātmā.

As we will see in a subsequent article, the inelegant solution of the bestowed-only side is that the relationship between the ātmā and the siddha-deha is similar to that of the ātmā and the material body: the souls drags the siddha-deha like a magnet drags iron filings, never actually making direct contact.5 The numerous problems with this conception will be addressed in two articles: part 13, which discusses vikāra in the ātmā, and part 14, which discusses the proper understanding of tadātmya.

In the first verse of Prīti Sandarbha, Jīva Gosvāmī himself refutes the idea that the soul searches not for bliss but rather for the absence of suffering:

All beings ultimately aim for prīti since one sees that a person exerts himself for that purpose. But not finding a suitable object for his prīti, a person avoids directing prīti to the Lord. Since everyone desires to find the ideal object for his prīti, it should result finally in prīti for the Lord. Since it has been properly concluded that prīti for the Lord is the highest human goal, it is correct to say that Prīti Sandarbha should be written. This Sandarbha has been compiled in sequence to show that prīti is the highest goal.6

Why would the soul search for prīti if our actual spiritual nature is only to be conscious and free from suffering? But the opposing side will argue, “Just see. This quotation says that prīti is the goal; therefore, it is not inherent.” This is not a well-thought-out position. Why is prīti the goal? Why do we strive for it? Because it is in our nature to experience it. Being in the unnatural position of being covered by māyā, we search for our dharma: our nature is to serve Bhagavān, dāsa-bhūto harer eva (the soul is a servant of Bhagavān Hari only and never of anyone else).

The Soul’s Svarūpa and Dharma

The essential dharma or svabhāva is that characteristic which is unique to the object and which determines the nature of that object. According to the Viśiṣṭādvaitin, every entity in the universe, both physical as well as ontological, consists of two aspects; substantive aspect which is dharmī and attributive aspect which is dharma. The latter cannot exist by itself and it necessarily inheres in the former which is the basis or āśraya for the dharma. The two by virtue of their intrinsic character are distinct but are inseparable. When an object is cognized, it is comprehended along with its essential attributes….The implication of this is that the svarūpa of an entity cannot be known or described except in terms of its essential attributes. In the opinion of Vedānta Deśika, a mere svarūpa devoid of essential characteristics is a non-entity like the horns of the hare.7

In summary, I have shown the major philosophical problems that the proponents of non-inherency have to deal with. Keep these problems in mind when considering the relative importance of different arguments. Although neither position in this debate is without some weaknesses, even if only apparent, not every philosophical problem is on the same level of severity. Each side will have some strong points, so we cannot be paralyzed when we see that the debate is not entirely black and white. Black and white understandings are mere simplifications for the less intelligent. Therefore, we need to be able to keep the big picture in mind while assessing the relative importance of different arguments. And have no doubt about it—the problems that I have pointed out with the bestowed-only position are not mere flesh wounds; they are fatal.

2 Responses to The Simultaneous Inherency and Bestowal of Bhakti—Part 6: The Search for Bliss