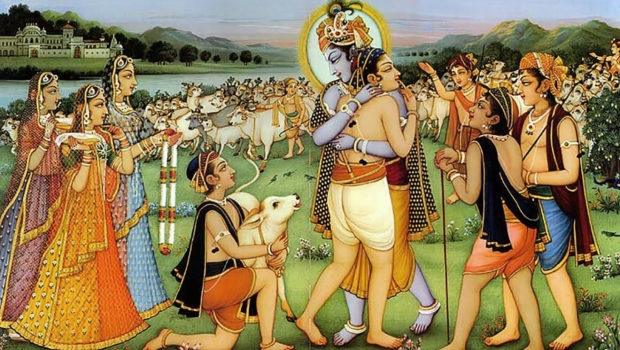 The Simultaneous Inherency and Bestowal of Bhakti—Part 13: The Bliss of the Jīva

Although the svarūpa-śakti is Bhagavān’s śakti, it is also the śakti that is used by Bhagavān’s devotees, including those who are not nitya-siddhas. As I showed in part 12 of this series, Jīva Gosvāmī says that when the soul acts with svarūpa-śakti, the soul himself is the doer; whereas, when the soul acts with māyā-śakti, prakṛti is directly the doer and the soul is indirectly the doer (because the soul and material nature never directly contact each other). The relationship between the devotee (the āśraya of bhakti) and his body, which is made of svarūpa-śakti, is one (tādātmya).2 These concepts are somewhat terse but are essential to understanding why Jīva Gosvāmī is saying that the bliss of the ātmā is small. The important point to understand is that the soul’s bliss is not small when his svarūpa-lakṣaṇa is fully manifest. As I showed in part 9, this only happens when the soul receives bhakti. Thus, again, we see that bhakti is both inherent and bestowed.

I will now discuss a section of Bṛhad Bhāgavatāmṛta (2.2.175–196) that is sometimes used to try to establish that cid-ānandātmakas tathā only means “conscious and free from material suffering.”

In this section of Bṛhad Bhāgavatāmṛta, the bhakti-śāstras discuss how to be happy and destroy suffering. They present how this question is answered by three groups: the followers of Nyāya, philosophers who accept only one portion of the Vedas, and the followers of Vivarta-vāda (the Māyāvāda theory of the illusion of the Supreme).

Sanātana Gosvāmī accepts the premise that the goal of human life is to be happy and destroy suffering. He then goes on to show how the three types of mokṣa (proposed by the three groups) does not accomplish their desired result. As we know from Prīti Sandarbha 1, “The goal of the human being is to attain happiness and destroy suffering. Complete happiness and destruction of suffering is attained only by prīti for the Lord.”3

Thus, although the bhakti-śāstras accept these three ideas about liberation for the sake of argument, the bhakti-śāstras’ main point, which they assert in the opening verse of this section, is that “there is no happiness in any of these ideas of liberation.”4 The assumption of the third group (Vivarta-vādins) is that “Liberation is realization of Brahman, which is one’s own ātmā, by giving up distinctions in saṁsāra.”5 Verse 2.2.176 addresses realizing one’s self separate from realizing Brahman. As we know from Prīti Sandarbha 60, knowledge of the soul apart from the body is merely in sattva-guṇa. Therefore, it is of no surprise that Sanātana Gosvāmī says that the bliss of realizing one’s svarūpa in this context is alpakam (meager). He says, “Accepting the principle of ‘let the ignorant be satisfied,’ the word happiness is used in relation to liberation. It should be understood as previously discussed that this is done in order to understand the greatness of happiness in bhakti.”6

Verse 2.2.177 describes realizing oneself as a particle of Brahman. One has to keep in mind that the bliss of identifying with Brahman is meager compared to bhakti because śakti is unmanifest in Brahman. Furthermore, identifying with Brahman requires bhakti because the unqualified Absolute is still an aspect of God. As we discussed previously, most of the twenty-one qualities of the soul require śakti, which would naturally be unmanifest for one identified with Brahman.

Jīva Gosvāmī says something in relation to Brahman that is also relevant to the individual soul: “Thus one vision is incomplete, manifesting the object without particulars. That is Brahman. That vision is complete when there is a form with various qualities arising from the svarūpa.”7 Although Brahman is sac-cid-ānanda, compared to the ocean of condensed bliss of Bhagavān with his svarūpa-śakti, the bliss of Brahman is no more than the water contained in a calf’s hoofprint (Caitanya-caritāmṛta 3.3.197). Therefore, when Sanātana Gosvāmī says, “The happiness that arises from directly perceiving the svarūpa of the jīva—the entity composed of eternity, knowledge, and bliss—is actually meager,”8 we must keep in mind the context. He is addressing those who believe that the individual soul and God are the same. By showing that by perceiving the svarūpa of the individual soul separate from God gives meager happiness, he establishes that the individual soul is not the same as God. Is this the full svarūpa of the jīva? No. How do we know? Because he is describing the realization of sac-cid-ānanda without śakti, and the full manifestation of the twenty-one characteristics of the jīva requires śakti.

Although Brahman and Bhagavān are advaya-tattva (nondual truth), the bliss of Brahman is meager compared to the bliss of Bhagavān. The reason for this is that Bhagavān has condensed sac-cid-ānanda. How does sac-cid-ānanda become condensed? When the śakti that is inherent in it manifests. Śrī Jīva reveals that the individual soul can also have condensed sac-cid-ānanda: “Sannyāsīs attain insignificant happiness on attaining liberation by knowledge of their svarūpa alone, but the devotees do not attain directly such insignificant happiness. The reason for rejection of both is that they have forms or svarūpas of condensed sac-cid-ānanda. Since they have condensed knowledge, they cannot have ignorance by which they would think meager happiness is the greatest. Since they have condensed bliss, none of them attain meager happiness.”9 Therefore, when the jīva realizes his svarūpa in the context of bhakti, then his ānanda is not meager because all of his twenty-one qualities are fully manifest.

This section of Bṛhad Bhāgavatāmṛta says that the soul is composed of a particle of sac-cid-ānanda (2.2.187). As we know from Caitanya-caritāmṛta 1.4.61–62, Kṛṣṇa’s svarūpa is sac-cid-ānanda pūrṇa. So obviously an atomic particle of sac-cid-ānanda is not equivalent to sac-cid-ānanda pūrṇa. Even so, Sanātana Gosvāmī establishes those who identify with Brahman do not experience happiness either. Why? Because experiencing happiness implies duality: the experiencer and the experience. Since those with an impersonal conception of liberation reject all duality, they are not able to experience the bliss of Brahman. Therefore, the śakti that would allow them to taste bliss is not manifest. Brahman is sac-cid-ānanda, but its inherent śaktis are unmanifest.10 From sac-cid-ānanda, the cit-śakti manifests as hlādinī-śakti, saṁvit-śakti, and sandhinī-śakti.11 Although ānanda is bliss, hlādinī-śakti is condensed bliss.

The important point to glean out of this is that depending on your angle of vision, one gets a different picture of someone’s svarūpa, even though that svarūpa doesn’t change. For example, the svarūpa of Brahman, Paramātmā, and Bhagavān is the same, but still the bliss of Bhagavān is greater than the bliss of Brahman. Brahman is without attributes and Bhagavān has attributes (dharma). To know something, we must consider that thing’s svarūpa and dharma. The two together are inseparable, although as we see in the case of Brahman and Bhagavān, the attributes can be unmanifest. Even though they are unmanifest, they are still an inseparable part of the absolute truth, which is known in three aspects: Brahman, Paramātmā, and Bhagavān.

Similarly, if you consider the amount of ānanda in the soul’s svarūpa—as a particle of sac-cid-ānanda—and don’t take into consideration bhakti—which is the soul’s eternal dharma or nature—the bliss is very meager because there is no condensed ānanda. One’s svarūpa doesn’t change if the inherent śakti is unmanifest, but the degree of ānanda that one experiences certainly does. With the mercy of Bhagavān or his devotee, the śakti that is inherent manifests, and the soul is able to taste condensed bliss. Thus, bhakti is both inherent and bestowed.

I have established that the soul’s qualities can be unmanifest or manifest and that cid-ānandātmaka means intrinsically of the nature of knowledge and bliss. However, some devotees argue that because the ātmā is eternal and not subject to modification, the change of qualities from unmanifest to manifest would make the ātmā modifiable (vikārī) like matter. I will address this objection in the next article.

8 Responses to The Simultaneous Inherency and Bestowal of Bhakti—Part 13: The Bliss of the Jīva