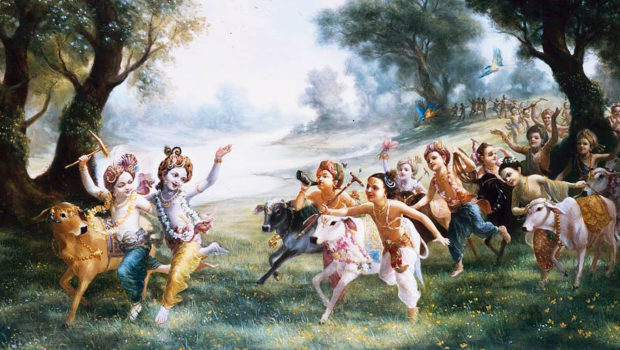 This article may be a little more difficult to follow than some of the others, so I will begin with an overview of the points I will cover. When the jīva acts in the material world, this action is not part of the jīva’s intrinsic characteristics. Such action is performed by material nature, and although material nature is animated by the soul, the soul does not directly perform the action. When Jīva Gosvāmī says that one of the jīva’s intrinsic characteristics is to be a doer, he is referring to action that is undertaken with the svarūpa-śakti. Since action performed with the svarūpa-śakti is bhakti and because all of the characteristics of the jīva are eternal, bhakti is inherent but unmanifest in the jīva. Since one who is covered by māyā cannot manifest the bhakti that is inherent without the bestowal of grace, bhakti is both inherent and bestowed.

The Śakti the Jīva Uses for Action

As I discussed in the previous article, there are three main śaktis: the svarūpa-śakti, the taṭastha-śakti, and the māyā-śakti. It intuitively seems that the jīva would use taṭastha-śakti to carry out three of its characteristics of knowing, doing, and enjoying (jñātṛtva, karṭrtva, and bhoktṛtva). However, Bhagavat Sandarbha 117 establishes something else. There, Jīva Gosvāmī says that there are higher (spiritual) and lower (material) forms of all the śaktis. The jīva uses different śaktis to do anything, such as knowing, doing, or enjoying. For each of these śaktis that the jīva uses, there is a higher (svarūpa-śakti) or lower (māyā-śakti) form. In other words, the jīva uses the svarūpa-śakti or māyā-śakti to perform action, not the taṭastha-śakti.

It may be surprising that the jīva does not use the taṭastha-śakti to act, but it actually makes sense. Because the soul is taṭastha (“on the border”), it can use either the material or spiritual energy. When the soul acts with the māyā-śakti, he is acting as Paramātma’s taṭastha-śakti to manifest the world (the potency by which the world is animated). When the soul acts with the svarūpa-śakti, he is acting for the pleasure of the Lord. Once a soul is fully situated in his inherent nature, then he can no longer be covered by māyā. Since such a soul is no longer situated between the svarūpa-śakti and māyā-śakti, he is only taṭastha in the sense that he is not in the category of the Lord (svāṁśa). Otherwise, for all intents and purposes, there is no difference between the sādhana-siddha and nitya-siddha devotees.

But what exactly is the relevance of this information? Is both the māyā-śakti and the svarūpa-śakti part of the jīva? For example, Jīva Gosvāmī says that the soul has jñāna-śakti. Is the material jñāna-śakti part of the soul? Jīva Gosvāmī answers this doubt: “Though it is established that the jīva is naturally a knower, his knowing that he is a body by ignorance is also the jīva’s knowledge, but because of its relation to ignorance, it is not natural to the jīva. Rather it is a distortion.”2 In other words, the answer is no. Material jñāna is not natural to the jīva. Thus, when Jīva Gosvāmī says that one of intrinsic characteristics of the soul is to have jñāna-śakti, this jñāna-śakti does not refer to material jñāna-śakti.3 Rather, it refers to spiritual jñāna-śakti, which is a form of svarūpa-śakti.

This point is further established by understanding the jīva’s svarūpa and taṭastha characteristics. The taṭastha characteristics are incidental and extrinsic to the jīva and, as such, do not belong to the jīva’s essential or intrinsic nature (svarūpa-lakṣaṇa). In Paramātma Sandarbha 19, where Jīva Gosvāmī explains the svarūpa characteristics of the jīva, he mentions that in anuccheda 1 he already gave the taṭastha characteristics of the jīva when he explained the verse beginning with kṣetra-jñā etāḥ (ŚB 5.11.12). Śrīmad Bhagavatam 5.11.12, spoken by Jaḍa Bharata to King Rahūgaṇa, relates to the jīva as kṣetrajña, knower of the field of perception in this world. Hence, the jīva’s qualities of being a knower, a doer, and enjoyer in relation to this world all fall under the category of his extrinsic or accidental attributes (taṭastha-lakṣaṇa), not his intrinsic attributes (svarūpa-lakṣaṇa) arising from his svarūpa.

But what about when the soul acts with svarūpa-śakti? Is the svarūpa-śakti part of the soul’s intrinsic characteristics? Jīva Gosvāmī answers this question in his commentary to Paramātma Sandarbha 34, where he discusses the soul’s characteristic of being a doer (karṭrtva). As we will see, he says that when the jīva is identified with the material body, māyā-śakti is the doer. This indicates that the māyā-śakti is extrinsic to the jīva. However, when the jīva does spiritual action—action that is predominated by cit-śakti (another name for svarūpa-śakti)—the jīva himself is the doer, indicating that svarūpa-śakti is intrinsic to the soul:

The jīva who is absorbed in the material body is a doer through the body’s senses. The pure jīva is inspired to act by Paramātmā. However, when prakṛti predominates, matter or upādhis are said to be the doer. But since it was already explained that the jīva outside the body is without [material] senses, ultimately it is the jīva himself who is the doer… the śruti describes that in the liberated state the jīva is a doer, playing in the spiritual world… In the spiritual world the jīva moves, laughs, plays, and enjoys (Chāndogya Upaniṣad 8.12.3). Being a doer does not in itself mean suffering. Action related to prakṛti brings suffering. Agency in relation to that which is pure does not contaminate the pure self due to the supremacy of cit-śakti.4

The Svarūpa-Śakti and the Jīva

This truth is shown in the brahma-vimohana-līlā, where Kṛṣṇa expanded his own form (svāṁśa) to replace the stolen cowherd boys (vibinnāṁśa). Although the cowherd boys’ bodies are svarūpa-śakti, as is Kṛṣṇa’s body, he experiences more bliss in relation to them (in their original forms). In contrast, Kṛṣṇa’s devotees experience more bliss in relation to him directly: the mothers felt more bliss when their sons had forms that were Kṛṣṇa himself (svāṁśa). In other words, just because Kṛṣṇa’s body and the devotees’ bodies are both svarūpa-śakti, they are not identical from the angle of rasa. If they were, then there would be no difference in regard to how much bliss was experienced, but such was not the case. These are the subtle workings of simultaneous oneness and difference.

It is a misunderstanding to say that the jīva (as taṭastha-śakti) is different from his spiritual body (which is svarūpa-śakti). As the quotation establishes, the devotee is the shelter of love and Kṛṣṇa is the object of love. The devotee is filled with rati and is therefore one (tādātmya) with the hlādinī-śakti. Some devotees have misunderstood tādātmya to mean the relationship between two objects (fire and iron). What tādātmya actually means is the relationship of something with itself. I will address this misunderstanding in part 15.

As we saw in the last article, when the jīva is liberated, he can be called svarūpa-śakti in that he is now acting for the pleasure of Bhagavān. It is also correct to say that the jīva is eternally taṭastha-śakti in the sense that he is not Kṛṣṇa’s own form (svāṁśa). However, when Kṛṣṇadāsa Kavirāja presents these concepts of Jīva Gosvāmī, he preferred to use the term vibinnāṁśa instead of taṭastha-śakti.7

The twenty-one qualities of the jīva are eternal and intrinsic, and they clearly require śakti, as one cannot be a knower (jñātṛtva), doer (karṭrtva), or enjoyer (bhoktṛtva) without śakti. As we have seen in this article, Jīva Gosvāmī clearly specifies that the śakti by which the jīva is actually a knower, doer, and enjoyer is the svarūpa-śakti. The relevance of this fact is that bhakti is inherent in the jīva, even as the jīva needs mercy to realize his inherent nature.

The Relevance of the Jīva’s Being Self-Manifesting

The fact that the svarūpa-śakti is intrinsic to the soul is also apparent from the fact that his quality of svayam-prakāśaḥ (self-manifesting) is also achieved with svarūpa-śakti. As we have established in this article, when the soul is not identified with māyā, all the śaktis of the soul are svarūpa-śakti. One can hardly be self-manifesting with an energy that is extrinsic to the self. In fact, Jīva Gosvāmī makes just this point: “the jīva reveals itself by its own śakti (not depending on another entity).”9 He also says in his commentary to anuccheda 8, “Self-manifestation does not depend on another entity at all. If it depends on something else, it cannot fulfill its definition.”10 Although the individual soul is fully dependent on the Supreme Soul for his śaktis, Jīva Gosvāmī confirms that this does not negate the soul’s self-manifesting nature.11 The reason for this is that the Supreme Soul is not considered “another entity” because of the acintya-bhedābheda relationship between the individual soul and the Supreme Soul.

In conclusion, we have discussed how the svarūpa-śakti is responsible for the soul’s knowing, doing, and enjoying when the sādhaka turns to God by the mercy of God or a devotee. The svarūpa-śakti is unmanifest in the jīva when he is turned away from the Lord and manifests when he is turned to the Lord. Jīva Gosvāmī establishes that the soul himself is the doer when he acts with svarūpa-śakti. Since that action is bhakti, bhakti is simultaneously inherent and bestowed. In the next article, I will return to the topic of the soul’s knowledge and bliss. Some devotees reference Bṛhad Bhāgavatāmṛta (2.2.175–196) to try to establish that cid-ānandātmakas tathā means “conscious and free from material suffering.” I will show the weakness of such an argument.

11 Responses to The Simultaneous Inherency and Bestowal of Bhakti—Part 12: Understanding Śakti