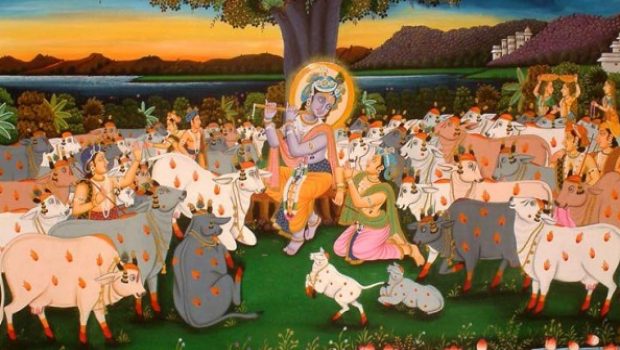 Amongst the assembly of priya-sakhas1 four are outstanding. Śrīdāmā, Sudāmā, Vasudāmā, and Kiṅkiṇi are the foremost among Kṛṣṇa’s beloved boyfriends, being in full knowledge of all his secrets. They are equally aware of both types of Kṛṣṇa’s līlās—those that are agopya (suitable for being revealed) as well as those that are gopya (appropriate to be concealed). All of the confidential Vraja-līlās like vastra-haraṇa (the stealing of the gopīs clothes) are fully known to these four boys.

One day the gopīs assembled together and traveled to the bank of the Yamunā in order to perform pūjā to the Goddess Kātyāyanī. Leaving their garments on the riverbank they immersed themselves in the water and engaged in water-sports in a playful spirit. Although situated elsewhere at the time, Yogeśvara Bhagavan could understand everything from within himself, and quickly came to that spot along with his confidential boy friends. For the purpose of fulfilling the cherished desires of the gopikās, he secretly stole all of their clothes. Collecting the garments with the help of his friends headed by Śrīdāmā, he climbed up a kadamba tree and started laughing and joking along with them. Śrīmad-Bhāgavatam 10.22.8-9 states,

Kṛṣṇa, the master mysticism, was aware of what the gopīs were doing, and thus he went there surrounded by his boyfriends in order to award the gopīs the perfection of their endeavor. Taking the girls’ garments he quickly climbed to the top of the kadamba tree. Then, as he laughed loudly and his companions also laughed, he jokingly addressed the gopīs.

In the verse beginning with the words bhagavan api the use of vayasyaiḥ (with the friends of the same age) indicates bālaiḥ (with boys) and also sakhībhiḥ (with his cowherd boy friends). Being surrounded by them , he arrived on the scene. It should be understood that these are the supremely intimate and internal friends Śrīdāmā, Sudāmā, Vasudāmā, and Kiṅkiṇi. This is also confirmed in the Gautamīya-tantra thus:

“The greatly famous Śrīdāmā, Sudāmā, Vasudāmā, and Kiṅkiṇi are the embodiments of Śrī Kṛṣṇa’s of antaḥkaraṇa, being non-different from his very self and therefore they are equally venerable with scented flowers as is Kṛṣṇa.”

Thus being the personifications of his antaḥkaraṇa feature, they represent his intelligence, egoism, heart, and mind.

This is the authoritative statement of the Goswāmī. These four sakhas are not different from Kṛṣṇa himself. Their dress and ornaments are impossible to describe in writing. The embodiment of Kṛṣṇa’s intelligence is the gopa named Śrīdāmā; the embodiment of his egoism is Sudāmā; the embodiment of his heart is Vasudāmā; the embodiment of his mind is Kiṅkiṇi. There are no confidential pastimes that Śrī Kṛṣṇa Chandra secretly performs in Vraja that are not witnessed by these four boys. Truly, one is never abandoned by one’s own intelligence, ego, heart, and mind; in all activities, these accompany one, while always remaining in the background. All of Kṛṣṇa’s līlās performed in Vraja throughout his three different ages—bālya (infancy), paugaṇḍa (childhood), and kishore (adolescence)—are never enacted without these particular boys. There is not a single thing about Kṛṣṇa that they are unaware of, from his relationships with parental associates up to the extent of his dealings in amorous love sports.

Other boys—the priya-narmā sakhas—are accomplices in the gopīs’ pastimes with Kṛṣṇa, and different members of this class will participate in different portions of these līlās. The priya-narmās headed by Subala, Arjuna, and others thus continually sport in the amusements enacted between the gopas and gopīs. However, the priya-sakhas can understand the internal intricacies of all these pastimes but never reveal such secrets externally for fear of causing discord in the flow of rasa. Again, among the priya-sakhas the above-mentioned boys embody the indwelling witness (antaḥkaraṇa) of Śrī Kṛṣṇa, and they are completely full to overflowing with kṛṣṇānanda.