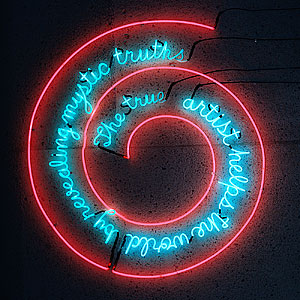 Recently my most kind-hearted and affectionate gurudeva suggested I read Huston Smith’s Beyond the Post Modern Mind, reviewed here on the Harmonist.  Among the various postmodern philosophers and postmodern precursors, discussed was postmodernism’s pioneer deconstructionist, Jacques Derrida.

One of Derrida’s insights is that claims of Absolute Truth marginalize other ideas and alienate us from others who don’t share our world view. Absolutes make us blind to alternative ways of understanding. There’s definitely some truth to this. Postmodernism’s remedy of absolute relativism, however, throws the metaphysical baby out with the bath water in pursuit of open-mindedness. Metaphysics are not that popular anymore, but an alternative to postmodern relativism may be to rely on people whose metaphysics are not only informed by logic and reasoning, but by genuine mystical experience. If nothing else this should help us to acquire firsthand experience of the mystical ourselves, whatever it is.

A natural conclusion of Derrida’s theory would be that the more a person bases his or her life on a metaphysical world view positing absolutes, the more closed and antagonistic towards differently thinking people he or she must become. But obviously (if anyone is looking at them) this is not the case with mystics. They are in many ways much more connected to nature, more conscious and in touch with what’s going on around them, kinder to other living beings, and flexible in their thinking—more so than most postmodernists. Unlike postmoderns they are not consumer oriented, basing their lives completely on a “metaphysical” foundation with claims of ultimate knowledge or at least complete happiness. Even the well-known atheist Sam Harris, referring to mystics, writes that “The happiest person in the world may be living in a cave.” And while there is some truth to “ignorance is bliss,” it does require some knowledge to be absolutely happy.

Institutionalized religion often serves as an example of what Derrida is warning about. When an institution is based on metaphysical principles but there are no members who embody the theory of its metaphysical system, the problems with absolute claims become very obvious. When religion becomes only a philosophical or theological belief system with no one to clarify and validate the construct with their mystical experience of it, card carrying members shift the ground, and instead of transcending limiting mental constructs they tend to embrace a worldly/mental notion of transcendence. To make matters worse, even if there are mystic experiencers within a tradition, institutions often turn against  those that actually embody the dynamic spirit of the institution. The realized person’s flexibility is seen as a deviation because it doesn’t fit the conditioned and literal understanding of the institution’s metaphysics. Truth has to be as the institution delineates it, otherwise it will crack the foundation the members have built their lives on leaving them with the disconcerting task of thinking spiritually for themselves. But then, this is a good part of what is required to arrive at real spiritual experience.

It could be argued that well-thought-out metaphysical world views, such as devotional Vedanta, that have lasted the tear of time have originated as a byproduct of mystical experience itself. The experiencers have put their experiences into words, and from this, philosophical systems such as Vedanta have taken shape. The mystical experience is afforded to a fortunate few through revelation, such that even their metaphysics are a descending form of knowledge. This is why reason should never be separated from the mystical experience and given independence. The best way to keep metaphysics from either turning into totalitarianism or into meaningless relativism as a reaction to totalitarianism, is to connect with a continuous stream of new revelation through a channel of saints whose lives exemplify the essence of what they teach, en route to becoming a mystic oneself.