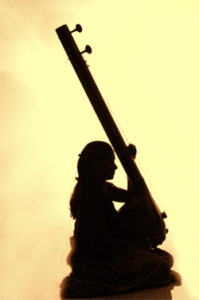 Baton-waving attendants guide motorists into neat rows, ensuring orderly and efficient use of a sprawling parking lot. Late arrivals ditch their vehicles on unoccupied patches of grass on the lot’s periphery before swarming into the venue and scrambling for whatever seats remain. The lobby teems with fans that snatch up the latest merchandise and eagerly sign up for mailing lists.

The scene described above is one that ensued before the concert of a professional recording artist on a nation-wide concert tour. What may come as a surprise, however, is that this artist is a self-described “kirtan-wallah.”

Of course, I am by far from the first to acknowledge that kirtan-yoga has truly “arrived.” The industry (and yoga is indeed an industry) has prominently embraced this enduring trend in its premier publication, Yoga Journal.

I attended the mobbed kirtan-yoga concert under discussion mainly as a gesture to two old friends who share an interest in things spiritual, including mantra meditation. I did not expect to be wowed (and I wasn’t) by the devotional atmosphere in the performance venue, nor bowled over by the basic philosophizing that the kirtan-wallah interspersed throughout his set. “Om namah shivaya” and other Sanskrit mantras in the dative case flow effortlessly from the lips of many yoga practitioners. At the concert performance that inspired this article, so too did “hare krishna.”

I nevertheless found myself somewhat conflicted about the scene that unfolded before me—hundreds chanting confidently and others swaying and dancing in the aisles with enthusiasm. From a Gaudiya perspective, the kirtaniya’s explanations of the mantras lacked—to put it generously—a certain theological depth and accuracy. In fact, nothing even close to the conceptual orientation of krishna-bhakti was put forward. I found such a deficit to be both discouraging and dismaying. At the same time, I was not certain that I could write off the kirtan participants’ genuine interest (and seemingly good nature in general) as the by-product of something entirely insidious.

I tried to think about what it might take to effectively expose those who appreciated the chanting and related explanations to a much fuller understanding of the maha-mantra (a “big hit” at this concert) and its theological underpinnings.

Of course, Srila Prabhupada often cited a verse from the Padma Purana that strongly cautions against hearing the chanting or scriptural recitation of those who believe the culmination of such kirtan to be exclusively monistic. Indeed, hari-kirtan in the line of Sri Caitanya Mahaprabhu is to be regarded as categorically different from kirtan conducted by those who do not understand (or accept) the full ramifications of nama-dharma. Certainly many of the statements made by purveyors of kirtan-yoga, both in the performance that I saw and in interviews such as those featured in Satyaraja dasa’s 2008 book on the subject, fall far short of “golokera prema dhana hari-nama sankirtana.”

When faced with the unprecedented surge and acceptance of kirtan-yoga, however, I suppose one option is to simply plug one’s ears and hope that authentic Gaudiya kirtan will somehow overwhelm the many popular variants now enjoying commercial success. Perhaps it would be more effective, however, to listen just enough to this new wave of kirtan enthusiasts, such that we understand the movement’s appeal. It seems that the inclusive and open-ended nature of kirtan-yoga (I heard the kirtan-wallah say, “Even I don’t know what the mantras mean.”) is at least part of the attraction, especially for westerners who find in the practice a welcome break from the rigidity of Christianity or Judaism, or the vacant confines of secularism.

It is indeed possible for Vaishnavas to foster the growth of the kirtan enthusiasts’ movement from imprecise, impersonal, and even somewhat irreverent conceptions of the holy name and various mantras to conceptions imbued with sambandha-jnana.  For example, in his review of the recent CD, “Ten Million Moons,” issued by Gaura Vani & As Kindred Spirits, Guru-nistha dasa drew attention to a group that has combined excellent musicianship and creativity with a Gaudiya message and lifestyle.  That group has also effectively marketed itself in ways that attract, rather than alienate, listeners of more “mainstream” kirtan artists.

One can also imagine Gaudiya teachers holding public programs in yoga studios and similar venues, interspersing more conventional lectures with kirtan, and including in those lectures inviting (rather than coercive or dogmatic) statements about why particular mantras are powerful and particularly worth integrating seriously into one’s practice.

Whatever the approach, it would seem that a type of “intervention” in the kirtan-yoga scene by thoughtful Gaudiya Vaishnavas would be opportune. However, that intervention must be tempered and informed by an appreciation and respect for the reasons why so many practitioners of ashtanga-type yoga exercises are beginning to participate in kirtan. If, on the other hand, Gaudiya forays onto the kirtan-yoga scene are tinged with sectarianism and unbecoming rigidity, the persons we may wish to engage in the fullest and most sublime form of kirtan may end up listening for sweeter tunes elsewhere.