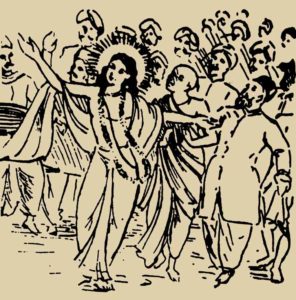 The final lesson in our classroom series discussing chapter 2 of Swami Tripurari’s Siksastakam of Sri Caitanya. San Rafael: Mandala, 2005. Swami will be responding to comments and questions while guiding readers through the text. Reader participation is encouraged.

Our discussion from the beginning of this chapter until now has centered on two virtues of Sri Krishna sankirtana: the power inherent in Krishna nama, being filled as it is with Krishna shakti, and the ease with which Sri Krishna sankirtana can be performed. Consideration of these two virtues brought joy to Gaura Krishna’s heart. However, another thought suddenly plunged him into an ocean of despair. As he chanted the second half of this stanza of his Siksatakam, Sri Krishna Caitanya was overcome with lamentation followed by humility, and in the mood of a sadhaka he voiced a doubt.1

Mahaprabhu’s doubt (samsaya) follows his original thesis (visaya). After stating his doubt, he strengthens it by citing evidence to support the antithesis (purvapaksa) of his original thesis. In speaking in this way, Mahaprabhu follows the standard for discussion established in classical Vedanta commentaries, where visaya, samsaya, and purvapaksa are invoked and then followed by siddhanta, or a conclusive, harmonizing synthesis that is supported by scripture. Let us examine Gaura’s visaya, samsaya, and purvapaksa and arrive at the siddhanta.

Mahaprabhu’s thesis (visaya) is found in verse one and in the first half of verse two—Sri Krishna sankirtana is the universal panacea. His doubt (samsaya) is found in the second half of verse two. There Gaura Krishna says that he is unfortunate (durdaivam). This statement implies the doubt that while others may experience the wonderful effects of nama-sankirtana, this is not his experience. To strengthen this doubt with an opposing argument (purvapaksa), Mahaprabhu offers evidence in the final line of his second verse. Therein he states that he has no love for Krishna nama (nanuraga˙), despite its merciful nature and the glorious effects said to accrue from engaging in it. Thus the antithesis is considered for the sake of the doubting sadhaka: perhaps nama-sankirtana is not the universal panacea after all.

The siddhanta that refutes the antithesis is that while nama-sankirtana is the universal panacea, to experience deep attachment for Krishna nama, one must approach it with the humility that Mahaprabhu expresses in this verse and verse three. Such humility implies a systematic approach under the guidance of Sri Guru, for humility before Krishna nama involves humbling oneself before its bearer, through whom Krishna nama agrees to come into our lives. If anyone should doubt nama-sankirtana’s efficacy, not having experienced its effects even after engaging in it, such doubt should be set aside with the understanding that although Krishna nama can be chanted under any circumstances, to experience all of its glory one must approach Nama Prabhu with the blessing of the guru and engage in nama-sankirtana under his or her guidance. In this way, gradually that which is impeding one from fully embracing Krishna nama will be removed, clearing one’s path to spiritual progress. Thus nama-sankirtana comes to the world through the guru-parampara, and Krishna nama chooses to reveal himself to those who honor this fact with all of its ramifications.

At this point one may justifiably question how a spiritual practice that is said to be unencumbered by restrictions of time, place, and so on—one that is relatively rule free—must be performed under the guidance of another, and all that this entails, for it to be effective. The answer to this doubt is that while nama-sankirtana transcends regulations governing other spiritual practices, there are nonetheless a number of things that help to create the conducive environment in which Krishna nama chooses to manifest its full glory. Sri Krishna himself corroborates this in Bhagavad-gita. When describing the principal characteristics of mahatmas, he says that they are always engaged in kirtana but then qualifies their participation in kirtana with the words yatantas ca dridha-vrata˙: “striving with determination in their observance of vows.”2 This unflinching observance of vows refers to following the guidance of Sri Guru, sastra, and sadhu in an effort to clear impediments and create a favorable environment for chanting.

What is it that impedes one’s ability to take advantage of the glory of nama-sankirtana? It is misfortune (durdaivam) in the form of anarthas. Anarthas are literally “false values.” They are those activities and thought patterns that get in the way of one’s ability to understand that which is actually valuable. Under their influence one is distracted even while chanting Krishna nama, and on account of this one cannot take full advantage of the chanting.

Anarthas are varied and numerous. They arise from pious as well as impious acts within the realm of karma. They also arise from within the culture of Krishna bhakti, for when as a result of Krishna bhakti one develops good qualities, fame and fortune may also come. If one then mistakes these things for being worthy of cultivation, one tends to the weed as opposed to the bhakti creeper itself. Finally, anarthas also arise from offenses. Such sins of the soul are most detrimental. The root of all anarthas, however, lies in false pride, pratistha. In this regard, Thakura Bhaktivinoda cites the following verse from Hari-bhakti-vilasa in his Bhajana-rahasya:

After renouncing all anarthas,
pride, their root, may still remain.
One should avoid this pratistha,
as if it were sewage in one’s drain.3

When sadhakas take to the path of nama-dharma in humility with the blessing of Sri Guru, they learn the method of nama-bhajana. They learn what is favorable and unfavorable to the chanting. They show gratitude to the preceptor and, in doing so, become fit for spiritual practice, fortified by the wisdom, example, and grace of an experienced devotee. Adherence to the instructions of Sri Guru thus equips sadhakas to progress despite anarthas in such a way as to gradually uproot them. Submission to the guru requires humility. Such humility fosters bhakti, and bhakti in turn fosters further humility.

Gaurahari speaks in this verse with lamentation as well as humility. He is lamenting his unfortunate condition and thus his heart swells up with dainya, humility. Sadhakas should feel like this. Such sincere humility attracts the grace and sympathy of Sri Krishna, thus terminating once and for all one’s sorrowful sojourn of samsara. Therefore Srirî Krishnadasa Kaviraja Goswami comments that although Mahaprabhu expresses lamentation in the second verse of Siksastakam, on hearing its significance all sorrow is silenced.4

Regardless of how fallen one may be, sincere acknowledgment of one’s condition and subsequent humility attracts sympathy and thus power beyond oneself. Sriman Mahaprabhu, the great master, teaches us this lesson here. One’s unfortunate condition (durdaivam), when sincerely acknowledged and understood, begets a natural humility that attracts the sympathy of Krishna nama and thus a solution to the problem posed here in verse two that despite the glories of nama-sankirtana, one has no attraction for it. Humility and the desire to overcome anarthas do not cause all anarthas to immediately disappear, but because they attract the sympathy of Krishna nama, he stays with one despite one’s background of offenses, and thus one is gradually purified by his grace and one’s nama-bhajana becomes steady.

One Response to Nama Sankirtana: The Universal Panacea?