Sanga: Karma and the Lila of Creation 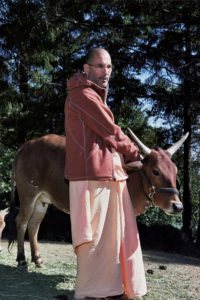 Q. Can you tell me something about the mantra om tat sat?

A. Although the sacred mantra om tat sat is one, it consists of three aspects. Om is well known as the name or sound of God. Tat is also a name of God, as we find in the Upanishads: tat tvam asi. Sat is God as the cause of the world. From sat, the real world and the unreal world of illusion (asat) arise. Thus om, tat, and sat are names of God, the chanting of which ensures all success in any endeavor.

Both religious and transcendent life are included within the scope of om. It is integral to Vedic utterances in pursuit of both ideals, for it signifies the supreme reality, that which all the gods and goddesses represent and that which liberated life thrives in service to. Its full realization gives rise to the supreme act of surrender to God, which converts religious life under the jurisdiction of the mode of goodness (sattva-guna) into perpetual adoration of God as the transcendent (nirguna) reality. These two aspects of the syllable om—religiosity and transcendence—are individually represented in the syllables sat and tat.

The syllable tat is invoked for liberation. While om is uttered before all acts, be they religious in nature or aimed at liberation, tat is uttered exclusively with regard to liberation. The syllable sat represents God’s presence in pious acts of this world. It represents goodness itself and auspicious acts of a religious and philanthropic nature. It also represents the virtue of one’s conviction in acts of sacrifice, austerity, and charity, as well as activities meant for assisting one in these acts. Thus its utterance in remembrance of God removes all discrepancy in the performance of pious acts.

Q. In a previous Sanga you mentioned that the Bhagavatam has over the years been changed or interpolated, and you refer to but a single reference to Krishna in Chandogya Upanisad (3.17.6). How can one build a Truth on the basis of an interpolated Purana and a single Upanishadic verse when the entire sruti sastras are largely silent about Krishna?

A. You did not read my answer carefully. In that Sanga I did not say that the Bhagavatam has been interpolated. What I explained was the nature of the difference between sruti and smrti, in terms of the latter being an ongoing and thereby dynamic explanation of the essence of the sruti, which is comparatively static in nature. Because the smrti constitutes an explanation of the essence of the sruti, the fact that sruti references to Krishna are limited is of little consequence. The point is that we can understand the significance of the sruti through the medium of the smrti and especially through the Puranas, which the sruti itself refers to as the fifth Veda. Of all the Puranas, the Bhagavatam is indisputably the most refined.

Although Krishna is hardly mentioned in the sruti, there is considerable mention of Vishnu. It is true that Indra is mentioned more than Vishnu in the sruti texts, but that does not mean that Indra is more important than Vishnu. Indeed, if we study the context of the sruti references to Indra and Vishnu, we will see that they are qualitatively different, and thus everyone understands Vishnu to be the Godhead and not Indra. This is why when we turn to the Puranas we find much more discussion of Vishnu than Indra. In the midst of that discussion, we find Krishna identified with Vishnu. Therefore, the conclusion that Krishna is the Godhead is not based on merely one verse found in the Rg Veda.

Q. In the same Sanga you said that Sankaracarya considered Krishna the Supreme Deity, which creates the false impression that his philosophy of Advaita Vedanta is in agreement with Vaishnavism. How can you justify this sort of misrepresentation?

A. The point under discussion was the extent to which the Godhood of Krishna could be established on the basis of scripture. In this regard Sankaracarya is in complete agreement with Vaishnava siddhanta when he says that Krishna is the purna avatara, isvara in his most complete and thus most charming manifestation.

Although Sankara relegates Krishna to his own conception of saguna Brahman, in doing so he acknowledges Sri Krishna as the most complete manifestation of Brahman the world has ever known, and he reaches this conclusion based on his analysis of scripture. Thus in the context of that particular discussion, it is of no consequence that Sankara’s personal ideal involves an attributeless, formless absolute—his so-called nirguna Brahman—and that in this sense he differs from the Vaishnava siddhanta.

Otherwise, considering all that I have written on Sankara and Advaita Vedanta, it is ludicrous to say that I am trying to misrepresent his philosophical position as being in complete agreement with Vaishnavism.

Q. It has been said that the yuga avatara of the Dvapara age was within Krishna when he appeared. If this is so, why is he coming at the end of the age?

A. In Srimad Bhagavatam we find the following verse glorifying the yuga avatara of Dvapara-yuga:

“Obeisances to you, Vasudeva, and to your forms of Sankarsana, Pradyumna, and Aniruddha. O Bhagavan, obeisances unto you.”

This verse is a pranama to the famed catur-vyuha of Krishna-lila in Mathura and Dvaraka. The doctrine of the catur-vyuha is found in a pancaratra text, along with the mantras and procedures for Deity worship, which is the yuga-dharma of Dvapara-yuga. Sri Jiva Goswami comments that although this fourfold appearance of God occurred at the end of Dvapara-yuga, great sages chanted this verse from the beginning of that age in expectation of their appearance.

In Dvapara-yuga monarchies prevailed and the king of the land was considered the representative of God and thereby venerable. The system of honoring the king was in place from the beginning of the yuga and the ideal of royalty appeared as the catur-vyuha near the end of the yuga. This is clear from Srimad Bhagavatam. However, the most recent Dvapara-yuga is peculiar, in that it occurs out of order and hosts svayam bhagavan Sri Krishna. When svayam bhagavan appears in this world he has a special purpose in mind, an ambition that requires him to appear in sequence in the subsequent Kali-yuga as Sri Caitanya in order to realize his ambition. Thus he appears at the end of the Dvapara-yuga as Krishna and the beginning of the Kali-yuga as Caitanya Mahaprabhu. Given the nature of his ambition, how could he have appeared at the beginning of the Dvapara-yuga, since this would have meant that he would have had to wait for the entire yuga to pass to realize his ambition?

Q. In discussing the concept of karma, we came across a passage in the book Subjective Evolution of Consciousness where B. R. Sridhara Maharaja says, “In the primitive state when the individual souls are massed together as a common whole, the conglomerate false-ego, or ahankara, is known as mahat-tattva….” Can you explain this passage as well as give us some insight on where or when our individual karmic paths began?

A. Throughout scripture karma is described as being anadi, or beginningless. This is because God’s (Maha-Visnu’s) pastime of creation (srsti-lila) also has no beginning, although it manifests and becomes unmanifest in beginningless and endless cycles. The individual souls (jivas) who participate in this lila have been doing so from time without beginning, and their beginningless interaction with material nature (maya-sakti) has the consequence of karma, the just rule of nature. While karma has no beginning, it can come to an end through Maha-Visnu’s mercy, which enables these jivas to become free from the bondage of karma.

Caitanya-caritamrta explains that the form of God known as Maha Sankarsana of Vaikuntha is the origin of all jivas: ‘jiva’-nama tatasthakhya eka sakti haya maha-sankarsana—saba jivera asraya. The eternally liberated (nitya-siddha) jivas that populate the spiritual sky expand from him like sparks from a fire. His incarnation, one aspect of the Paramatma (Maha-Visnu), presides over the material world (maya-sakti). Thus Maha Sankarsana is also the shelter of this first purusa, Maha Visnu: sei purusera sankarsana samasraya. As an avatara of Maha Sankarsana, this purusa, Maha-Visnu, is the shelter of the jivas who populate the material world.

Scripture says that Maha-Visnu glances at maya and lights up the world with jiva-sakti: adya-avatara kare mayaya iksana. This is called srsti-lila, or the lila of creation, in which Maha-Visnu, although setting it into motion as the Paramatma, is not a principal player. He expands into every universe and every atom, and through him Bhagavan also incarnates for various lilas of his own. These lilas are aloof from the world other than to uplift the nitya baddha-jivas (eternally conditioned souls), who are under the influence of anadi karma.

The section of Subjective Evolution of Consciousness that you have cited is referring to the condition of the nitya-baddha jivas when the material world is in an unmanifest condition between creations. In this interim condition, karma is suspended and the individual jivas tend towards homogeneity. When Maha-Visnu desires out of his own joy to become many, the jivas begin their march towards heterogeneity and the material individuality that is demarcated by their karma. This coming and going of the nitya-baddha jivas has no beginning any more than Maha-Visnu himself does. This is his lila, in which we play a significant role. In his srsti-lila, we eternally have the opportunity to choose to leave through the grace that Maha-Visnu showers on the world by facilitating Bhagavan Narayana’s lilas of incarnation. His grace comes in the form of both lila and yuga avataras, as well as though his devotees in guru-parampara. Leaving the srsti-lila, one enters the nitya-lila of Bhagavan in Vaikuntha, where Bhagavan plays the principal role.

This is the normal course of events. We, however, are more fortunate in that we have been graced by an exception to this norm. We have the opportunity to rise from the srsti-lila to beyond Vaikuntha, for Vrajendranandana Krishna has appeared as Sri Caitanya Mahaprabhu in place of the Kali-yuga avatara. In doing so, he has shown the way to enter the Vraja-lila, unknown as it is even to the inhabitants of Vaikuntha, by following in the footsteps of his eternal associates.

29 Responses to Sanga: Karma and the Lila of Creation