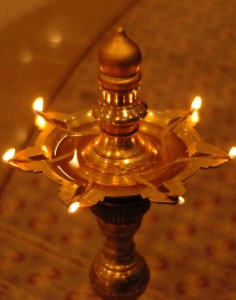 Lesson two in the Harmonist classroom series discussing chapter five of Swami Tripurari’s Siksastakam of Sri Caitanya. San Rafael: Mandala, 2005. Swami will be responding to comments and questions while guiding readers through the text. Reader participation is encouraged.

Speaking of the serving ego that forms the basis of one’s spiritual identity, Mahaprabhu told Sanatana Goswami, jivera ‘svarupa’ haya—krsnera ‘nitya-dasa’: “The eternal svarupa of the jiva is Krishna dasa, a servant of Krishna.”1 A serving ego is the basis of all expressions of bhakti-rasa. Whether one experiences oneself as a servant, friend, elder, or lover of Krishna, all of these experiences of sacred aesthetic rapture are expressions of service intensified to different degrees. This serving ego is the antithesis of the enjoying ego, an identity based on material attachment in a self-centered world of “I” and “my.” Any position in the world of divine service—even that of a dust particle at Sri Krishna’s lotus feet—is desirable in comparison to the highest position in material life, pada-pankaja-sthita-dhuli-sadrsam vicintaya. Unfortunately, most would prefer to reign in hell than to serve in heaven.

In this fifth verse, Mahaprabhu does not aspire for a specific position of eternal service—as a servant, friend, parent, or lover—but appropriately conceals his budding life of internal bhajana. As Narottama Thakura Mahasaya sings, apana bhajana-katha na kahiba jatha tatha: “One should not reveal one’s bhajana to others,”2 and rakha prema hrdaye bhariya, “Keep your love hidden in your heart.”3 By keeping one’s love within, the fire of love compresses and becomes more and more powerful, propelling one onward to prema.

It is clear, however, that Mahaprabhu desires one of the eternal sentiments of Vraja prema from the fact that he refers to his Pranesvara as Vraja’s Nanda-tanuja. In asakti Mahaprabhu’s object of love and attachment is the cowherd son of Nanda. Nonetheless, the way in which Mahaprabhu would like to serve his object of love—what specific sentiment of love he has become attached to—remains hidden.

Asakti literally means attachment. In the stage of ruci, a sadhaka is more attached to bhakti itself than to the object of bhakti. In asakti this balance shifts, as the object of the sadhaka’s bhajana takes his seat in the heart and the sadhaka thus becomes attached to him personally. Just as our material sense of identity is based on attachment to sense objects, in the stage of asakti, as spiritual attachment for Sri Krishnaa awakens through nama-sankirtana, a sadhaka’s attachment forms the basis of his or her budding sense of identity as an eternal servitor in one of four loving sentiments.

Spiritual attachment arising out of nama-sankirtana gives rise to spontaneous meditation on Sri Krishna in the same way that a materially attached person spontaneously thinks of the object of his or her attachment. One’s mind goes effortlessly to that which one is attached to. As a less advanced sadhaka’s mind is prone to spontaneously wander from a deliberate effort to think of Krishna, similarly in asakti a sadhaka’s mind wanders spontaneously to thoughts of Krishna when discussing mundane topics. Such is the powerful effect of nama-sankirtana. It fosters a meditative state in which the sadhaka participates internally in lila-seva from the vantage point of his or her siddha-deha.

As we have seen, the spirit of one’s svarupa, regardless of the particular form it takes, is selfless service. In this verse of Siksastakam, Mahaprabhu identifies himself as a kinkara, a servant. The word kinkara is derived from the two words kim (what) and karomi (I do), and thus implies, “How can I serve you?” This is the only question one needs to ask of God and guru. When asked in earnest with a pure heart, the subsequent answer gradually manifests as one attains the stage of asakti and glimpses one’s eternal serving nature.