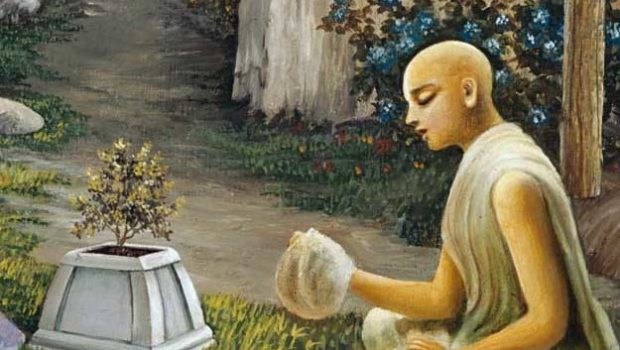 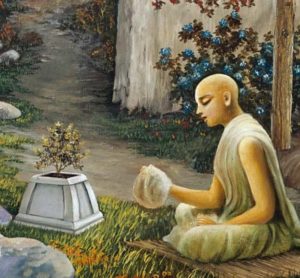 Lesson two in our classroom series discussing chapter four of Swami Tripurari’s Siksastakam of Sri Caitanya. San Rafael: Mandala, 2005. Swami will be responding to comments and questions while guiding readers through the text. Reader participation is encouraged.

All human activities are rooted in desire, desire to attain pleasure and desire to avoid pain. Human desire can be divided into three categories: first, the desire for sense pleasure, which, while never satisfying one, nonetheless drives one to pursue the same sensual experience again and again; second, the desire for material acquisition, wealth, honor, power, security, and so on, which is progressive in that it does not mandate meaningless repetition but rather the drive to realize consistently greater goals; third, the desire for virtue, good character, righteousness, and so on, which is more progressive still and brings a sense of contentment and clear insight as to the nature of the world.

These three kinds of desires are products of the influence of the three gunas of material nature—tamas, rajas, and sattva—manifesting in the human psyche. They are known, respectively, as kama (pleasure), artha (power), and dharma (virtue). All three of these involve the perceived necessity to be something: to be gratified, to be powerful, to be virtuous.

The virtuous glimpse the fact that a life based on the perceived need to become something obscures the perception of that which we already are. This alone gives the virtuous life absolute value and superiority over aspirations for power and pleasure, which under the influence of virtue also have limited value. The truly virtuous ego is the potential bridge to transcendence of the false ego. Crossing that bridge with the energy of spiritual practice leads to moksa, freedom from necessity. Arriving there we find ourselves. We find that we have no need to become something because we already are something far greater than anything the limited human experience can afford. From the realm of the experienced (matter), we enter the realm of the experiencer (consciousness).

However, in this verse we find that Mahaprabhu’s ideal transcends even moksa! Implicit in his lack of concern for transcending birth and death is the fact that for one who has attained ruci the web of samsara is practically dismantled. It happened as a by-product of nama-sankirtana. The only desire that Mahaprabhu has at this point is the desire for bhakti, bhakti for its own sake—bhavatad bhaktir ahaituki tvayi. Again, this is the principal characteristic of ruci-bhakti. With this in place, Mahaprabhu is now poised to taste all that liberated life includes—a transcendental relationship with God beyond the fetters of matter.

Matter provides only a distorted or false sense of pleasure/joy, power/security, and virtue/wisdom. In connection with matter one can experience a temporal sense of sense pleasure, existence, and material knowledge. The pleasure, power, and virtue inherent in a unit of consciousness, a jiva, are far greater than that which one can experience in relation to matter. Dwelling in the self, one experiences the joy inherent in consciousness, nontemporal existence, and knowledge of oneself as a unit of consciousness. However, the inherent joy, security, and wisdom in the jiva are minute in comparison to the extent that these are inherent in God.

While security (sat), wisdom (cit), and pleasure (ananda) are inherent in the jiva soul, God is the reservoir of these three. In God they are manifest to a much greater degree as sandhini, samvit, and hladini. Thus the security, wisdom, and joy that the jiva who awakens to a loving relationship with God can experience are far greater than that which he or she can experience independent of such a relationship. When the liberated soul experiences liberated life in relation to God, it realizes its eternal form, eternal service, and the joy of love of God. This liberated life in relation to God is the ideal of suddha-bhakti, which the sadhaka has been cultivating in the sadhana of nama-sankirtana. Before it manifests, one first becomes virtuous (anartha-nivrtti). Virtuous life is followed by the initial phase of liberation from the influence of karma (nistha), and at the stage of ruci one begins to taste the ideal life of pure devotion in love of God. This taste appears in the form of attachment to hearing and chanting in nama-sankirtana, a special taste for postliberated life in comparison with which the four purusarthas pale.

In rejecting the four purusarthas, Mahaprabhu follows the lead of Srimad-Bhagavatam. As mentioned earlier while discussing Mahaprabhu’s first stanza, the Bhagavatam picks up exactly where the Bhagavad-gita leaves off. At the Gita’s conclusion Sri Krishna says, sarva-dharman parityajya: “Give up all concern with dharma.”1 This parallels the Bhagavatam’s vastu-nirdesa-sloka, which begins with the words dharma˙ projjhita-kaitavo ’tra: “Rejecting all forms of cheating dharma.”2 By cheating dharma, this verse refers to all expressions of dharma not aimed at prema. Sridhara Swami, the ancient Bhagavatam commentator who was so revered by Mahaprabhu, writes that the word projjhita (completely rejecting) in this verse includes foregoing not only dharma but moksa as well. Thus it should be clear from this important Bhagavatam verse that the Gita’s conclusion, which it follows in the wake of, is not merely the advocacy of transcending dharma in pursuit of liberation. As the Bhagavatam points to prema, so too does the Gita.

Krsnadasa Kaviraja Goswami cites the vastu-nirdesa-sloka of the Bhagavatam in his Sri Caitanya-caritamrta in the context of explaining his own namaskara-sloka glorifying Gaura-Nityananda’s divine dispensation of nama-sankirtana.3 There he says:

Krishna and Balarama, who previously played in Vraja,
their splendor more magnificent
than millions of suns and moons,
have arisen in the east—the horizon of Gauda—
out of empathy for the entire creation.
The appearance of Sri Krishna Caitanya
and Prabhu Nityananda
has filled the whole world with ananda.
As the sun and moon dissipate darkness
and by their appearance illuminate all things,
these two brothers preach prema-dharma
and dispel darkness—ignorance covering living beings—
with the gift of truth’s substance, ultimate reality.
I call the darkness of ignorance kaitava—cheating.
It all begins with desire for dharma, artha, kama,
and moksa.4

In comparison to the light of love emanating from prema, the Vedic law concerning dharma, artha, kama, and moksa constitutes a dark cell for criminals. Gaura-Nityananda’s prema-dharma, drawn from Srimad-Bhagavatam, comes to liberate everyone from the law of the sacred Vedic texts that came before it. Understood in terms of Mahaprabhu’s sankirtana, Srimad-Bhagavatam is the New Testament of the Vedic scripture. All that has come before it that stresses the four purusarthas is superseded by its message of prema. Love of God—prema-dharma—fulfills all the laws and teachings of the Vedas. It is the pancama-purusartha, the fifth and ultimate necessity of humanity. As Mahaprabhu’s merciful preceptor, Sri Isvara Puri, instructed him:

While the fifth end
is an ocean of immortal nectar—prema’s joy—
the joy of moksa and the rest are but one drop at best.5

Thus we learn from Sri Isvara Puri that humans differ from animals not merely because they can reason but because by properly exercising their reasoning they can truly love by learning to love God. Knowledge leads to detachment and moksa, but prema—love—leads to postliberated life. This is the message of the Bhagavatam that Mahaprabhu embraced so closely to his heart. It is an invitation to participate in the eternal drama of Krishna lila.

As we have seen from this fourth verse of Siksastakam, Mahaprabhu, representing a devotee who has attained ruci, stands well positioned to gradually experience prema-dharma and the drama of Krishna lila. When the sadhaka attains ruci, saranagati is fully in place, as his or her sraddha has matured by virtue of being in touch with the land of faith. Now the stage—saranagati—on which the drama of Krishna lila is performed is established in the sadhaka’s heart. The seeds of material desire are destroyed and the seed of bhakti that has already sprouted in the form of sraddha begins to blossom.