Sanga: Beyond All Our Conceptions 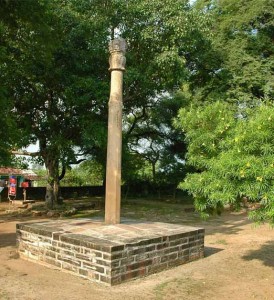 Q. Krishna’s pastimes (Krishna lila) are believed to have taken place five thousand years ago in India, so if there were a satellite photographing India at that time would it have been possible for it to take a photo of Krishna and his associates? In other words was Krishna lila a historical fact or is it just a meditation that allows one to experience a taste of the Supreme? How do we reconcile our belief in Krishna lila with the need of the materialistic mind for objective proof?

A. Krishna lila cannot be known through empiric research. Don’t depend on this for serving, and only by serving will you know what Krishna lila is. Krishna’s pastimes are beyond the limits of mind and intelligence (adhoksaja/aprakrta). Empiric evidence is always lacking in terms of validation of divinity. Pujyapada Sridhara Deva Goswami talks about it like this:

It is unthinkable, unknown, unknowable. It is such an inconceivable thing; it is adhoksaja. It can never be caught by our force of mind, or intelligence. Its existence transcends our mental speculation and logical considerations. But still it exists. This is lila, eternal incidents, events which are repeated in a particular way, like a drama. One drama is repeated many times in the eternal quarter. By Krishna’s will, some glimpse comes to the current mundane world as an exhibition, to attract the people of this age. (Follow the Angels)

The Srimad-Bhagavatam seeks to describe the theological and philosophical significance of Krishna’s appearance in the world. Although the Bhagavata isn’t fictious, it doesn’t document history like we do today. Vyasadeva endeavored to capture the essence of events, particularly their spiritual significance. Furthermore, while Krishna lila occurred in the world, it is simultaneously transcendental to it. It is conducted under the influence of Bhagavan’s svarupa-sakti, not his maya-sakti. So although the Srimad-Bhagavatam isn’t exactly empiric evidence for the existence of Krishna and his lilas in this world, it is perhaps the best evidence we have.

However, there is also conventional evidence that the Greeks were influenced by Krishna bhakti and that they acknowledged Krishna as a divine being who appeared on Earth in Mathura along the banks of the river Yamuna. This can be found in Megasthenes’ Indika, a book from the fourth century BCE that is cited extensively by ancient classical Greek writers. Early archeological evidence speaks further of the Greek ambassador Heliodorus being converted to Krishna bhakti in the first century BCE. The inscription on the Heliodorus column that attests to his conversion refers to Krishna as the “God of gods” and is thus an early reference to the Gaudiya insight that Krishna is the fountainhead of all avataras. Thus it is clear that the Bhagavata religion centered around the historical appearance of Krishna was thriving long before the 4th century BCE.

Gaudiya Vaishnavas also have the comparatively recent historical example of Sri Caitanya. His divinity is attested to by a number of contemporary writers, who in their biographical accounts all make the case for his divinity and identification with Krishna by referencing sacred literature and citing eyewitness accounts of his miraculous deeds. Thus they have established with reason, scriptural evidence, and personal testimony that Krishna and Sri Caitanya are one and the same person appearing at different times for basically the same purpose. Furthermore, Sri Caitanya himself teaches us that Krishna is a historical figure of this world. He teaches us that Krishna is also nondifferent from his name, and chanting his name, Sri Caitanya melted in ecstasy to an extent that has not been seen in this world before or since.

Therefore, when Sri Caitanya says that Krishna appears in this world, we accept his testimony on faith, well-reasoned faith that is based on evidence for Sri Caitanya’s divinity. We do not understand divine faith to be the absence of reason but rather a well-reasoned conclusion that among other things acknowledges the limits of reason and empirical evidence in terms of their capacity to shed light on ultimate reality.

You ask for evidence of Krishna. As I mentioned, it is the Bhagavatam that provides us with the primary record of Krishna lila. The supporting evidence, the testimony of Vaishnava saints, is an ongoing record that reaches its zenith in the life of Sri Caitanya Mahaprabhu. He went to Vrindavana and through his glance of love projected his heart, his bhava, onto the terrestrial plane where he saw Krishna’s pastimes taking place eternally. In turn his devotees honor the love-laden glance of Sri Caitanya. What he saw, what his empowered followers Sri Rupa, Sanatana, and others saw taking place in Vrindavana, we honor; and they described Krishna lila as a transcendental historical event.

Overall, I would recommend that one be faithful to the experience of Sri Caitanya and to his theology espoused by the Goswamis. However, as the subject is transcendental, there is room for nuanced understandings relative to one’s spiritual advancement to the extent that they foster devotion. The important point to remember is that the materially conditioned mind cannot force its way into Krishna lila, rather through bhakti the mind of the practitioner becomes purified, and then and only then will Krishna lila reveal itself to the devotee. When the lila reveals itself, the experience will undoubtedly transcend all your previous conceptions.

Q. You have written that the Srimad-Bhagavatam contains Vedic wisdom in the sweet form of poetry. This sounds nice, but describing the Bhagavatam as poetry causes me to wonder whether or not the stories found therein are literally true, as we know that poetry gives license to embellishment. The idea of the Bhagavatam as poetry also seems to lend itself to impersonalism, as modern exponents of Advaita Vedanta usually view scripture allegorically, as opposed to literally. How then should we understand the Bhagavatam as poetry? Isn’t poetry more or less the opposite of literalism?

A. The Srimad-Bhagavatam itself describes Krishna lila as being revealed in poetic language, and you are correct in saying that poetry is not a language used for literal accuracy. Krishna lila is also described as having been written in the “samadhi bhasya” of Vyasa, the linguistic attempt on the part of the sage to explain the experience of his devotional samadhi, or ecstatic trance of enlightenment in love of God. His attempt can be likened to teaching music to the deaf, or explaining love to one who has no experience of it. The Bhagavatam is his attempt to relate what lies beyond language and thought to those confined within the limits of language and thought. This is one of the reasons why you will find other scriptures and saints describing the same lilas with varying details, all with a view to convey that which the lila is actually constituted of, bhava and rasananda (ecstasy).

However, while the Bhagavatam is a poetic book, it is also a profound one. Its author has danced a tightrope of tension between opulence (aisvarya) and sweetness (madhurya), between the Godhood of Krishna and that which makes him most accessible, his endearing humanness. He has written of how the One who needs nothing finds himself in need and thus becomes approachable in love. As needy as Bhagavan Sri Krishna is, is as much as he is full in love, as love by its nature has a need to share and celebrate itself.

The Bhagavatam as understood by Sri Caitanya paints the art of Krishna lila on a canvas of acintya-bhedabheda. This nondual, theistic metaphysic speaks of divine love (prema) as its goal (prayojana). It speaks of spiritual love of God in intimacy as that which is to be attained. It describes a dynamic nondual reality that is simultaneously one and different with its energies (saktis) by the force of its transrational or inconceivable power. In love you and I become “we” in a dynamic union that preserves as much as dissolves our individuality. If this metaphysic is understood, regardless of how nonliterally one takes the description of Krishna lila, one will never end up in nirvisesa Brahman, or nondifferentiated consciousness devoid of the variegated, post-liberated lila. If you understand acintya-bhedabheda, the metaphysical worldview of the Vrindavana Goswamis, who have given us the texts that explain the ecstasy of Sri Caitanya in light of earlier revelation such as the Upanishads and Puranas, you will understand the ontological necessity of eternal form, qualities, and lila.

Does Krishna have a form? He is the form of ecstasy. Thus he has been experienced and described in terms of that which in our world takes us beyond ourselves—the intoxication of youth, romantic love, and so on. He is the form of sat-cit-ananda: being, knowing, and ecstasy, with emphasis on ecstasy. Does he appear on earth? How can he not appear when his devotees pine for him in separation, their hearts growing fonder by the day? He appears in their hearts and then they see him before them, because meditation on him alone will not satisfy their pure desire to love him in intimacy. Indeed, he is nondifferent from their pure hearts, as love for Krishna and Krishna himself are one and different simultaneously. The form and appearance of Krishna corresponds with the hearts of his devotees. Before Radha, the pinnacle of devotion—both Deity and ideal of devotion—he cannot appear in the opulent form of Narayana with four arms. And we are taught that Vrindavana, his earthly abode, is not to be considered a limited geographical area. No, it is boundless by measure of devotion, by measure of love.

6 Responses to Sanga: Beyond All Our Conceptions