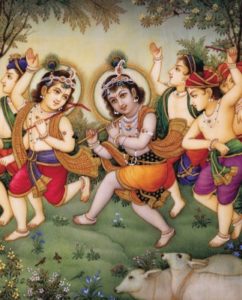 Lesson two in the Harmonist classroom series discussing chapter six of Swami Tripurari’s Siksastakam of Sri Caitanya. San Rafael: Mandala, 2005. Swami will be responding to comments and questions while guiding readers through the text. Reader participation is encouraged.

One’s sthayi-bhava is the dominant spiritual sentiment through which one desires to serve Krishna in his eternal lila. It is the basis of one’s spiritual identity that has dawned through the sadhana of nama-sankirtana and Krishna mantra-dhyana. In bhava one views the drama of Krishna lila through the lens of one’s developing sthayi-bhava, identifying with a particular sentiment expressed by one of Krishna’s eternal associates who has become one’s role model.1

Vibhavas, which arouse and intensify one’s sthayi-bhava, appear in two varieties: alambana-vibhava and uddipana-vibhava. There are two alambana-vibhavas: the object of love and the embodiment of love. In the lila the object of love is Krishna and the embodiment of that love is one of his eternal associates who relishes a particular sentiment, such as romantic love. The uddipana-vibhavas are the personal qualities and attributes of the object of love. Uddipana-vibhavas are such only because the bhava-bhakta has already begun to awaken the sthayi-bhava that causes them to be experienced in this light. One who already has love for something will experience things in relation to it as further stimulus for that love.

While vibhavas stimulate one’s sthayi-bhava, anubhavas and sattvika-bhavas are responses to this stimulation. Anubhavas are deliberate bodily movements, such as coy smiling, singing, and dancing, and sattvika-bhavas are involuntary bodily movements, such as tears or fainting. The final ingredient of rasa is vyabhicari-bhava, a transitory expression of love such as anxiety, humility, or jubilation. Vyabhicari-bhavas, although similar to sthayi-bhavas, are not powerful enough to be dominant emotions.

An illustration of how rasa expresses itself in lila-smaranam should help the reader to grasp this difficult subject. If the sthayi-bhava being cultivated is romantic love, the bhava-bhakta sees Radha as the perfect role model. She is the embodiment of the love that the devotee aspires to experience, and Krishna is the object of that love.2

While meditating on the lila, the vibhavas, such as the sound of Krishna’s flute and the coming of spring, will excite Radha’s love, her sthayi-bhava. Thus the bhava-bhakta who is identifying with that love in meditation is similarly stimulated. If the bhava-bhakta’s sthayi-bhava is deeply felt, then it will result in a physical indication of the sentiment of romantic love that Radha experiences, such as a coy smile or sidelong glance. Such a physical indicator is an anubhava. Involuntary responses also manifest in the form of tears and other sattvika-bhavas in Radha’s person. As they appear in Radha, they also appear in the devotee cultivating romantic love for Krishna. Finally, as vyabhicari-bhavas (transitory emotions), such as despondency and jubilation, appear in Radha, they also appear in the meditative bhava-bhakta envisioning the lila. All of these bhavas occurring together heighten one’s sthayi-bhava such that it ascends to the point of rasa, the zenith of spiritual emotion in aesthetic rapture.

Srila Rupa Goswami has compared sthayi-bhava’s ascent to rasa to the rising of the ocean in a monsoon. Just as the ocean is the source of clouds, which then shower rain on it and increase its tide, similarly the awakening of one’s sthayi-bhava gives rise to the other emotional ingredients that shower down on the ocean of one’s sthayi-bhava, increasing its depth and issuing forth a tidal wave of rasananda. When the bhava-bhakta tastes rasa, his or her bhava-sadhana is mature.

The bhava-bhakta directly experiences Krishna in the world of spiritual emotion, and thus the Deity, who for the most part in sadhana-bhakti was theoretical, appears bigger than life. Having left the world where feeling and emotion are generated by the mind and have no potential to acquaint one with rasa, the bhava-bhakta is now absorbed in the world of actual emotions in close pursuit of prema-rasa. Sri Rupa writes that the bliss of bhava knows no bounds, ratir ananda-rupaiva. Mahaprabhu has said as much in the first verse of Siksastakam when he spoke of how Sri Krishna nama-sankirtana drowns one in an ever-increasing ocean of ecstasy—anandambudhi-vardhanam. Experiencing this in the company of Ramananda and Svarupa, Sri Gaura-kisora prayed to Krishna after uttering his sixth verse of Siksastakam. With his heart melting in bhava he cried out to Krishna in the mood of Radha, “Make me your maidservant, my wage the wealth of prema.” (‘dasa’ kari’ vetana more deha prema-dhana (Cc. 3.20.37) ))