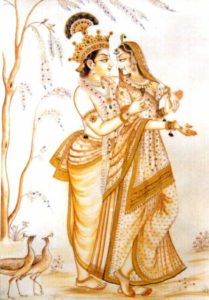 The final lesson in the Harmonist classroom series discussing Swami Tripurari’s Siksastakam of Sri Caitanya. San Rafael: Mandala, 2005. Swami will be responding to comments and questions while guiding readers through the text. Reader participation is encouraged.

When Radha asserts herself, establishing her superiority and relishing Krishna’s embrace, some might conclude that her attitude is something other than that of a mere maidservant. Mahaprabhu, absorbed in her mood, responds to this charge: mora sukha—sevane, krsnera sukha—sangame, ataeva deha dena dana, “My happiness is service. Krishna’s happiness is union with me. Therefore, I give my body to him in charity.”1 It should be understood that Radha acts assertively because she knows that in certain instances only she can satisfy Krishna. Radha’s delight in Krishna’s embrace is derived solely from the pleasure he draws from it. For Radha, union with Krishna is not about her pleasure. Pleasure is merely a by-product of her service that she accepts only because doing so pleases Krishna. For Radha, seva is sweeter than sambhoga. Mahaprabhu therefore says, kanta-seva-sukha-püra, sangama haite sumadhura: “Service to Krishna is the home of happiness. It is sweeter than union.”2 Thus despite Radha’s outward forwardness, internally she maintains the mood of a maidservant, exemplifying selflessness to the extreme.

This selflessness is the ground on which mahabhava dances, ground that even beginners can identify with as they set their sights on the towering ideal of the highest love. It is for this reason that Mahaprabhu emphasized Radha’s selflessness in his final verse and subsequent elucidation. Radha’s extreme selfless serving disposition establishes her as Krishna’s personal Deity, for in Mahaprabhu’s ideal, love holds a position higher than God. Krishna is God conquered by love, and Radha’s love reigns supreme, such that Krishna himself becomes her student. Radha’s love is Krishna’s guru, radhikara prema—guru, ami—sisya nata.3 This is the purport of Siksastakam revealed in its final sloka, echoing the essence of Srimad-Bhagavatam’s rasa-pancadhyaya: love is its own reward.4

The love that Radha experiences, the madanakhya-mahabhava that she alone tastes, is such that Krishna himself yearns to taste it. One may, however, justifiably question how Krishna can lack anything. How can the Absolute be incomplete? The answer to this question can be found in the philosophy that underlies Krishna lila. Krishna is full in himself, yet he is full of love, and love is never satisfied with itself. To taste himself more fully he manifests as two—Radha and Krishna. As the sruti proclaims, ekaki na ramate: “Alone one finds no pleasure.”5 That which resides within Krishna in an abstract sense as his inherent hladini-sakti manifests externally in a concrete form as Radha. These two, rasa and prema, are in essence one. Krishna is rasa and Radha is prema. One has little meaning without the other. Rasa is the highest taste and prema is the means of tasting it.

Because the two, rasa and prema, are essentially one, Krishna naturally desires to express this. He desires to be one with Radha, for as much as love requires two, it is all about two becoming one. However, he must do this in a dynamic sense to preserve his original purpose of fully tasting himself. He must become one with Radha while preserving both of their identities. This dynamic unity gives rise to Sri Krishna Caitanya, the combined form of Radha and Krishna. He is both rasaraja and mahabhava, ‘rasa-raja’, ‘mahabhava’—dui eka rupa.6 Krsnadasa Kaviraja Goswami describes this phenomenon:

Radha and Krishna’s love is a transformation of hladini-sakti. On earth, the one, Krishna, has become two, Radha and Krishna, eternally. Then, as Gaurasundara, these two formed a dynamic unity. Pranama to Gaura, who is endowed with Radha’s countenance and personality.7

Although Krishna is complete in himself, he is best equipped to taste love when he expands into two, Radha and Krishna. Philosophically speaking, he does not lack anything; however, at that timeless moment when Krishna becomes Radha and Krishna, lila is born and Krishna loses himself in the drama of divine love. As Krishna becomes absorbed in exchanges of love with his counterwhole, Srimati Radharani, he realizes that tasting love from her vantage point is more desirable than relishing it from his own. Consumed by his own play, he begins to ponder perhaps the greatest theological question: “How can I taste Radha’s prema?”

Contrary to what one might expect, Radha is not inclined to give her prema to Krishna, for she knows its power and how it will drive him mad. Furthermore, in her mind it would be improper to take a superior position to his, and in her supreme humility, she recoils at the thought that her superiority—the power of her love—might be broadcast all over the world. She knows that such a campaign would be a natural result of Krishna becoming mad with her prema and losing his composure. Radha understands the far-reaching consequences of this. After all, while the secret of secrets is that Krishna is her pupil in the school of love, outside of this private tutoring everyone else knows him as the Supreme Brahman, sought after by the most sober sages. He is God, to whom no one is superior.

Thus the necessity of stealing arises in Krishna’s mind. There is no other option. Krishna concludes that he must steal Radha’s prema if he is to taste it, and taste it he must, because he knows that it is superior to anything he has tasted. Whatever embarrassment stealing her love may bring as a consequence, Krishna knows that true supremacy lies in tasting love—love is supreme. Furthermore, just as Radha wants to see him glorified, he wants to see her glorified. Despite his being a thief, he is the Supreme Truth. Truth be told, while most teach that God is the most worshipable object, Radha is the worshipable object of God. Thus Krishna tries to steal Radha’s prema to tell the world the truth. Although he is purnananda-maya, completely filled with joy, and cin-maya purva-tattva, the complete spiritual truth, the fact is that her love drives him mad.8 Jaya Radhe! Jaya Gaurahari!

Krishna’s madness, induced by Radha’s prema, gives birth to Gaura lila and Gaurahari’s prema-sankirtana, which in turn offers the world a golden opportunity. As we have learned, exactly what that opportunity is and the means to take advantage of it are explained in Siksastakam. After considering its significance, it is fair to ask if anything else remains significant in comparison. Sri Siksastakam turns the religious world on its head. This poem has the power to awaken yogis from trance and make them dance. As for jnanis who have thought so much that their minds have stopped, Siksastakam tells them to think again, deeply.

Devotees, rejoice! Gaura composed the eight verses of Siksastakam for the purpose of advertising the purest love, and after composing them, Gaura tasted that love in Siksastakam’s final stanza and invited the entire world to do the same. Sri Siksastakam should be recited daily and its deep meaning should be contemplated over and over again. These eight verses of Gaura Krishna awaken sraddha in the sadhana of nama-sankirtana and give bhakti in sequential steps culminating in Vraja prema. Blessed are those who take advantage of it. May they bless me by allowing me to follow in their footsteps.