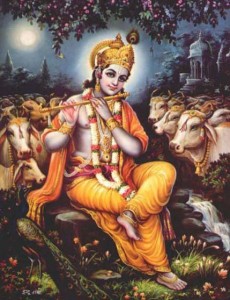 Brahma answered: Verily, Krishna is the Supreme Deity. Death is afraid of Govinda and by knowing Gopi-jana-vallabha one knows all things. This world turns through svaha.

The process of spiritual initiation (diksa) involves the preceptor’s imparting a diksa mantra to the disciple. The principal diksa mantra of the Gaudiya Vaishnava lineage is the eighteen-syllable (astadasaksara) Gopala mantra, which consists of five distinct sections1 and is prefaced by the kama-bija.2 While the five sections of the Gopala mantra are mentioned in this verse (krsnaya, govindaya, gopi-jana, vallabhaya, and svaha), the kama–bija, which is also the eighteenth syllable of the mantra, is not. This bija— the seed of the mantra—will be explained later in this text, as will the mantra in considerable detail.

Along with imparting the mantra at the time of initiation, the guru explains its significance, and this is exactly what Brahma does in this and the following verses of the first section of Gopala-tapani. Thus we are privileged to witness through the written record of this Upanisad the sacred rite of spiritual initiation: Brahma imparting and explaining the Gopala mantra to the Kumaras. It should be noted, however, that witnessing initiation and being initiated are two different things.

Sruti-devi introduces Brahma with the word brahmanah . Brahma is the perfect brahmana—the leader of the learned priestly class, the upper strata of Vedic society. Brahma’s standing as a brahmana involves much more than mere ordination into the priesthood and knowledge of religious ritual and metaphysical theory. An actual brahmana is one who knows Brahman, the Absolute. Thus the intention of the goddess in referring to Brahma with the word brahmanah is clear: she is stressing that Brahma is highly spiritually qualified. He knows Brahman, the supreme object of worship. Thus when Brahma answers the sages’ first question by stating that Krishna is the Supreme Deity, krsno vai paramam daivatam, he is saying that Krishna is the Supreme Brahman. “How is that so?” Sri Prabodhananda asks, then answers his own question: “Because worship of Krishna corresponds with the form of all varieties of divine joy (brahmananda) combined. There is no difference between what is known as brahmananda (the bliss of Brahman) and camatkara (sacred aesthetic rapture, rasa).” Furthermore, he goes on to say, Brahma’s being a knower of Brahman in the full sense of the term makes him “helplessly driven to contemplate the question, ‘How can a special taste in devotional practice be attained?’”

Well-known scriptural evidence for this opinion of Sri Prabodhananda is found in the Taittiriya Upanisad (2.7.1) when that esoteric doctrine proclaims raso vai sah, “He (Brahman) is sacred aesthetic rapture (rasa).” As much as Brahman is rasa, Krishna is Brahman, because he embodies all possibilities for reciprocal dealings in transcendental love. He has therefore been described by Sri Rupa Goswami in his seminal work Bhakti-rasamrta-sindhu (1.1.11) as akhila-rasamrta-murti, “the embodiment of the ambrosia of immortal joy known as rasa.” Krishna is the Supreme Deity because the liberated bliss of Brahman is attained in its entirety by worshiping him and, moreover, because all potential for reciprocal dealings with God in sacred aesthetic rapture can be realized through his worship. While Narayana (God) and Krishna are one tattva, one entity, when analyzed in terms of attractiveness and capacity to reciprocate in love, Krishna surpasses Narayana and all of his avataras. The well-known pada of the Bhagavata Purana (1.3.28) says as much, krsnas tu bhagavan svayam: “But Krishna is the original Godhead.”

Having answered the sages’ question concerning the Supreme God, Brahma turns his attention to the Kumaras’ second question. As learned sages, the Kumaras undoubtedly already had high regard for the liberating effects of knowledge and devotion. Death is transcended by the culture of devotion and the knowledge to which it gives rise. Thus the sages are asking Brahma for something more than an explanation of the standard path by which one can gradually transcend death. They want to know whom death itself fears, by the invocation of whose name death is made to flee. In other words, is there any practice by which as a mere by-product one is able to transcend death?

Brahma replies that death is afraid of Govinda, a reference to Krishna relative to his cowherding lila in the village of Vraja. While the name Krishna also refers to this lila, it is not exclusively tied to his life among the cowherds but extends to his princely lila as well. Thus by telling the sages that death is afraid of Govinda, Brahma extols the path of unalloyed love, ragamarga. This path is tread by the devotees of Vraja, who know Govinda as their intimate friend, his godhood suppressed by the intensity of their love.

The nature of the Vraja devotees’ love for Govinda is so overwhelming that it causes the Supreme God to lose sight of his own supremacy. The greater part of the devotional world regards him with awe, and in this world people usually pray to him for entrance into heaven and emancipation from death. While God readily grants such requests, neither these petitions nor reverential devotion attracts him personally. The ideal of the Vraja bhaktas, on the other hand, completely captivates him. His lila with them is so spiritually pleasing that simply by remembering these pastimes and identifying with them one can transcend death without making any separate effort.

Even the asuras killed by Govinda in Vraja attained freedom from the cycle of birth and death, what to speak of his devotees. Furthermore, Jiva Goswami comments that Govinda—the cowherd—is completely unreserved and thus sometimes even grants the asuras he kills love of God, a postliberated position in sacred aesthetic rapture.3 These Vraja lilas are a complete contrast to Krishna’s lilas in Mathura and Dvaraka, where he is not a cowherd but a prince. There he is more restrained and respectful of the religious system; he thus grants the demons he kills only heaven or liberation. For these reasons, death is particularly afraid of Govinda, whose lila of love is the essence of the Vedas (go).

Within the transcendental drama of Vraja lila, the cowherd Govinda has a love affair with the village milkmaids, the gopis. Knowing the details of this aspect of his lila, which is a privilege not even granted to all his Vraja devotees, leaves nothing remaining to be known about the Absolute. Thus, as Brahma conf rms here in his answer to the Kumaras’ third question, by knowing Gopi-jana-vallabha, the lover of the gopis, one knows everything.

Gautamiya-tantra states that the word gopi can also refer to the material nature and jana to its twenty-five elements, gopiti prakrtim vidyaj janas tattva- samuhakah. He who is the resting place of these two, who pervades them and is the cause of their manifesting as the world, is known as their master, or vallabha. He is joy personified. Only one who also knows Gopijana-vallabha in this sense truly knows the significance of his love affair with the gopis. Thus Brahma tells the sages that by knowing Gopi-jana-vallabha one knows all things, material and spiritual.

In response to the Kumaras’ fourth question Brahma says, “This world turns through svaha.” The word svaha is uttered when offering oblations to the sacrificial fire and thus indicates sacrifice. Sacrifice is the principle by which we both live happily in this world and transcend it altogether. We truly gain only through giving. When we give of our possessions, we gain in the realm of material acquisition; to the extent that we give of ourselves, we gain understanding of our true nature.

Svaha also makes the drama of Krishna lila turn in the spiritual world, for as we shall see further on in Brahma’s explanation of the Gopala mantra, the two syllables sva and ha are also identified with the primary sakti of Krishna, which fuels his lila. When the spirit of self-sacrifice turns to self-forgetfulness in love, it is called prema-sakti. Prabodhananda Sarasvati comments that this prema-sakti embodied in the gopis is indicated by the syllable sva, while the syllable ha signifies devotion to Krishna. Taken together, they suggest that the gopis belong only to Krishna.

Thus the mantra under discussion propitiates the Supreme Deity, brings an end to death, and reveals all knowledge culminating in the highest love. It is to be chanted in a spirit of self-sacrifice reposed in the Supreme Deity. The names Krishna, Govinda, and Gopi-jana-vallabha indicate a progression ascending from Krishna (the all-attractive) to Govinda (the cowherder in Vrndavana) to Gopi-jana-vallabha (that same cowherder conquered by the gopis’ love).