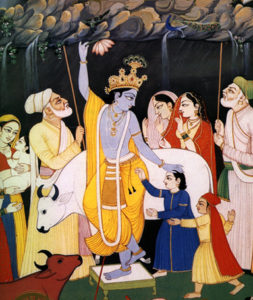 The brahmanas have copiously sacrificed to that Krishna. They have worshiped him as Govinda. He is Gopi-jana-vallabha, who has taken hold of the planets. Taking shelter of svaha, he became the virile semen that quickened the universe.

As Brahma continues, he describes a gradation of worship that corresponds to the mantra’s three names: Krishna, Govinda, and Gopi-jana-vallabha. In so doing, he demonstrates how the scope of the mantra includes the entirety of Krishna lila, with each of the three names of God representing different entry points into that lila. Krishna is he whom the brahmanas have ascertained to be the Supreme God, and thus they worship him in the form of the Deity. Prabodhananda Saraswati understands the word yajanti connected to the name Krishna in this verse to mean pujayanti, implying the path of ritualistic worship (arcana-marga), which is generally tempered with reverence.

In contrast to the names Govinda and Gopi-jana-vallabha, the name Krishna in the mantra corresponds more with love of Krishna experienced in vaidhi-bhakti, a spiritual practice in which ritualistic worship (arcana) is more prominent, leading to love of God tinged with reverence. Devotees who aspire to serve Krishna in his lilas in Dwarka—where a stronger sense of his majesty prevails—worship him through the sadhana of vaidhi-bhakti. They experience the mantra to be speaking primarily of Krishna, who is also known for his Vraja lila, in which he is a cowherder (Govinda) and the lover of the gopis (Gopi-jana-vallabha).

While the name Krishna is the least specific of the three names and pertains to all manifestations of his divine lila, the name Govinda refers only to his Vraja lila. There Govinda is the friend of the cows and one of the cowherds himself. With his many friends he wanders throughout the forest herding Nanda’s cows. His cowherd friends are on an equal footing with him. They know no distinction between his body and theirs, and thus they never hesitate to embrace him or even climb on his shoulders. Those who aspire for this ideal in raganuga–bhakti experience the Gopala mantra to be speaking primarily of Govinda, who is also known as Krishna and Gopi-jana-vallabha.1

In the second pada of this verse, the word aradhayanti is used in relation to Govinda, as opposed to yajanti, which is used in relation to the name Krishna in the first pada. Aradhayanti implies a worship that is superior to that indicated by the word yajanti, again distinguishing the raga-marga from the path of vaidhi-bhakti. Visvanatha Cakravarti Thakura says that while many brahmanas worship Krishna and follow the path of the sastras (vaidhi–sadhana), many others follow the path of spontaneous love (raganuga–sadhana), worshiping Govinda as the hero of Gokula, just as its eternal residents do. Prabodhananda Saraswati similarly suggests that the word viprah in relation to the word aradhayanti means, “those brahmanas who have attained the taste of passion, or raga.”

Govinda also means one who gives joy to the gopas and gopis, such as his father and mother, Nanda and Yasoda. They worship him in parental love, and those who follow in their footsteps will see the names Krishna and Gopi-jana-vallabha in the Gopala mantra as aspects of their Govinda.2

Sri Caitanya, while representing all the four spiritual sentiments of Vraja bhakti—subservient, fraternal, parental, and conjugal love—is Krishna in search of the highest reach of Radha’s love for him. The experiences of all three other spiritual sentiments of Vraja are present in the sentiment of conjugal love. Those who aspire for this spiritual sentiment in Krishna’s Vraja lila understand the names Krishna and Govinda in the Gopala mantra to be aspects of Gopi-jana-vallabha. Sri Caitanya Mahaprabhu himself chanted the ten-syllable Gopala mantra, klim gopi-jana-vallabhaya svaha, rather than the full eighteen-syllable Gopala mantra given here in Gopala-tapani. Thus it is to be understood that the names Krishna and Govinda in the mantra are not absolutely necessary for those who aspire for conjugal love of Radha-Krishna.

Brahma concludes this verse by refining his definition of the word svaha. He whom Krishna has taken shelter of is his devotee (Sri Guru). The devotee is the shelter (asraya) of a particular sentiment of divine love. He is the embodiment of that love and thus the role model for those who aspire for it. He is its shelter, and that love is a particular manifestation of Krishna’s own nature, his svarupa-sakti. Krishna places himself in his devotee through his svarupa-sakti and is thereby purchased by him. The guru is such a devotee, the embodiment of self-surrender. Through his agent in whom he has taken shelter, Krishna becomes the “virile semen that quickens the universe.” Prabodhananda Saraswati says this means that “by the intensity of his love he causes all the universes to be helplessly overcome by trembling and other ecstatic symptoms.” Such symptoms were exhibited by Sri Caitanya in his acarya–lila, his pastime of teaching the path of raga-bhakti by his own example.

Just as the air enters into the universe and takes five forms in each body, so too does Krishna, though one, take this five-sectioned form of sound for the welfare of the world.

Brahma further stresses that the mantra, although fivefold, represents one entity, Parabrahman. Thus he gives an example: air is essentially one substance but expresses itself in five forms within the material body to facilitate bodily functions.3 Similarly, Parabrahman is essentially one entity, yet for the welfare of the world manifests in a fivefold way to give spiritual life to the world’s inhabitants.

The sages said: Tell us the means of worshiping (upasana) the Supreme Soul, Govinda, who contains everything.

Having heard about the nature of worship in the previous verse, the sages now ask about the method of worship.