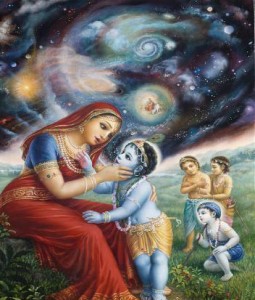 In this connection, there are a number of verses:
The one, all-pervading controller is the worshipable Krishna. Although one, he appears in multiple forms. Those sages who constantly worship him seated upon his throne attain permanent happiness, and not others.

This next group of verses (19–24) continues the discussion of arcana. Here Brahma says that he will cite several verses concerning the worship of Parabrahman in the form of the five-sectioned mantra,1 implying that the verses represent his own experience, as no particular scripture is cited. However, Brahma’s verses, while original, are based on those found in the Vedas and in some cases are only slightly different from well-known Upanisadic statements about the Parabrahman.

In this verse, Krishna is described as simultaneously one and many. He is one in that he is nondual consciousness and thus devoid of any internal or external distinctions.2 He is not constituted of parts that are different from him. His form is nondifferent from himself, and thus there is no internal difference (svagata-bheda) in him. Nor is Krishna different in substance from his avataras, who are all of the same tattva. Difference between objects of the same class is called sajatiya-bheda in the language of Vedanta. If he were different from his avataras, he would suffer from sajatiya-bheda and thus not be nondual in the Vedantic sense. This is not the case with Krishna.

This is the metaphysical truth of the nature of the Parabrahman, who nonetheless expresses himself in apparent difference for the sake of his lila. Thus when scripture speaks of the Parabrahman, it speaks of the inconceivable: concomitant difference within nondifference. Sri Jiva Gosvami has termed this metaphysic acintya-bhedabheda-tattva. While essentially one, Krishna is at the same time all-pervading. He is thus beyond time and space, and controls both of them and everything else within their jurisdiction. Although Krishna is one, by his inconceivable powers he appears as many. In addition to his appearance in the world in the form of the five-sectioned Gopala mantra, he appears in many other forms, such as his numerous expansions during the rasa-lila and the brahma-vimohana-lila.

Whereas those who worship him attain permanent happiness, those whose worship is focused on things within time and space cannot attain enduring joy, for such things are here today and gone tomorrow. Because they are impermanent, they cannot be worshiped in the true sense of giving one’s self to them entirely and thus realizing a dynamic union with them. Something that is unable to free one from the limitations of time and space cannot bring enduring happiness.

Prabodhananda Saraswati comments that the word “one” in this verse indicates that Krishna is svayam bhagavan: he is without equal or superior.3 He cites the statement of Srimad-Bhagavatam (3.2.21), “He is the Lord of the three worlds, who is neither equaled nor excelled.” Thus Krishna is also the controller (vasi). The adjective “all-pervading” (sarvagah) in this verse further confirms this assertion.

Brahma stresses that sober, discriminating people (dhira) have reached this conclusion about Krishna. He is not alone in his opinion but is joined by sages like Sukadeva, the narrator of Srimad-Bhagavatam, and all those in the Bhagavatam that Sukadeva mentions who accept Krishna as their ista-devata (worshipful Deity). This list includes all the principal inquirers and those who answer their inquiries.4 Because Krishna is their ista-devata, they experience a joy unknown even to those great devotees who worship Narayana. This is the implication of the words sukham sasvatam netaresam in this verse. Use of the word sukha as opposed to ananda refers to transcendental humanlike happiness, which is possible only in relation to Krishna, not Narayana.

Prabodhananda Saraswati cites Srimad-Bhagavatam 10.14.57 as an explanation of the first two lines of this verse. This Bhagavatam verse is one of the prayers spoken by Brahma in praise of Krishna after the cowherd Krishna revealed his godhood during the brahma-vimohana-lila. At that time Brahma said, “Everything has an essential value; the value of that value is Krishna. Just try to describe something other than him.”In the same way, Brahma says here that it is only because Krishna is eternal that individual souls can experience eternity; because he is consciousness that individual souls are also consciousness.

Sri Prabodhananda poses the following question while explaining the second half of this verse: “There are unlimited numbers of worshipers. Will Krishna’s relations with them be limited by his oneness mentioned in the previous verse?” The answer given: “He is the one who fulfills the desires of many.” Thus his being essentially one does not inhibit him from the unlimited reciprocation required to satisfy all souls in terms of their desire for prema, or perfection in love of God. In his Brhad-bhagavatamrta (2.6.211–12), Sanatana Goswami says that each of Krishna’s eternal cowherds feels that Krishna loves him the most and that it is indeed wonderful that each of them is correct. All souls can attain everlasting perfection through devotion to him.