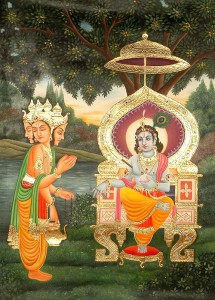 I, along with the Maruts, constantly endeavor to please with glorious hymns that one supreme Lord, Govinda, whose fivefold form is transcendental existence, consciousness, and bliss, and who is seated at the base of a wish-fulfilling tree in Vrindavana.

With this and the previous verse, Brahma begins to bring his instruction to the sages to a conclusion. In so doing, he begins his salutation to Sri Krishna, which continues in verses 34–45. Brahma says that the object of his meditation is Govinda, who is sac-cid-ananda-vigraha. Govinda’s fivefold form is the fivefold mantra consisting of eighteen syllables, which is nondifferent from Govinda himself—the form of eternality, knowledge, and bliss (as opposed to the formless Brahman). Govinda is the fullest expression of joy within the reality of nondual consciousness.

Gaudiya Vedantins experience ultimate reality as nondual consciousness, which on account of its being joy itself1 is experienced in three realizations through three paths to transcendence. These realizations of the Absolute are experienced as Bhagavan, Paramatma, and Brahman to devotees, yogis, and jnanis, respectively. The Absolute is joyful by nature. In order to be so, it must also exist and be cognizant of its existence. While there can be an existence that is not cognizant of itself, as well as a cognizant existence that is not joyful, there cannot be a joyful reality that either does not exist or is not cognizant of its existence. When existence becomes cognizant of the extent to which it exists—of its purpose—it has reason for celebration.

From the joyful Bhagavan, who is absorbed in divine play, an aura of pure, undifferentiated consciousness emanates. This aura is Bhagavan appearing as Brahman. Paramatma is Bhagavan manifesting in relation to material existence, which consists of the individual souls and matter. Paramatma expands and oversees this existence. In this sense, Bhagavan represents the joy of the Absolute, Brahman consciousness or cognizance, and Paramatma existence.

While the joyful Bhagavan exists and is cognizant of his existence, his joy is so pronounced that in his most complete manifestation as Krishna he appears unconscious of anything else, including his own supremacy. As Brahman, Bhagavan is primarily only cognizant. The joy of Brahman is that of peace, and there is little if anything that resembles existence with all its variety and movement in this feature of Bhagavan. Paramatma is fully involved with material existence. Although he is cognizant and joyful, these two qualities are less apparent in him. In the Paramatma the play that expresses joy is called srsti (creation). As Paramatma plays and thus manifests the material existence, he also enters into every aspect of this existence as a witness. The stillness of Brahman lies in between the movement in the spiritual world that Bhagavan is concerned with and the movement of the material world that Paramatma is concerned with. Thus while all three—joy, cognizance, and existence—are present in all three features of Godhead, each feature is distinguished from the other by the prominence of one of the three qualities.

According to this understanding, Bhagavan represents joy (ananda), Brahman cognizance (cit), and Paramatma existence (sat). However, Paramatma can also be conceived of as existence characterized by cognizance of itself, and Brahman as existence in general. When viewed in this way, Paramatma represents cit rather than sat, and Brahman represents sat rather than cit. Brahman is almost always described in scripture as pure consciousness, so it would seem natural to associate it with cit. However, since consciousness normally requires an object one can be cognizant of, it would seem more logical to describe Brahman as simple existence. Paramatma implies variety and therefore greater cognizance.

In this verse Brahma’s realization is that of a devotee. His object of meditation is Bhagavan Sri Krishna, the form of eternity, knowledge, and bliss. While we often think of form as a contracting factor, it can just as well be conceived of as that which facilitates and thus expands one’s capacity to express oneself. Indeed, beauty without form is hardly beautiful; beauty requires someone to know about it and celebrate it. Brahma’s object of meditation, Govinda, is the form of beauty itself. He is ever-existing, all-knowing joy personified.

In this verse, the words marud-ganah can be understood in two ways. Overtly, they speak of Brahma’s worldly associates, the Maruts, or worldly gods in charge of the wind. Jiva Goswami comments that this understanding of marud-ganah implies that Brahma is worshiping Govinda along with the Maruts, whom he takes with him mentally, for on their own they are not qualified to enter Govinda’s abode and have his darsana beneath the desire tree. This abode is only for the desireless.

Sri Jiva offers the alternative possibility that marud-ganah indicates the eternal associates of Krishna, by whom he is ever surrounded in love. In this connection, he cites a verse from Padma Purana based on the Purusa-sukta, in which the words sadhya visvadevah sanatanah appear.2 “Previously the Sadhyas, the eternal lords of the universe, and so on, with beautiful forms, lived in that highest heavenly abode (naka), taking on its glories.” Sri Jiva’s pramana verse in support of this alternative understanding is based on the Rg Veda: te ha nakam mahimanam sacanto yatra purve sadhyah santi devah. The term sadhyah in this pramana verse can be taken to mean either the material demigods of that name or those who have achieved the goal of perfection and are eternal associates of the Lord in his supreme abode, the highest heaven.

Brahma’s own words in Srimad-Bhagavatam also lend support to the understanding of marud-ganah as eternal associates of Govinda. After experiencing Krishna’s supremacy in Vrindavana, Brahma aspired to become a resident of Krishna’s abode even in the most insignificant role as a stone or blade of grass. Such desire is akama (desirelessness). The Sanskrit letter a represents Krishna, who says in Bhagavad-gita, “Of letters I am a.” Thus a-kama means both no desire and the desire for Krishna, who is attained by loving service. Great souls and gods of this world desire this service and demonstrate that any position in Krishna’s abode, however insignificant, is far superior to even the highest position attainable in the material world. Brahma says that attaining any position in Vrndavana constitutes the highest fortune (tad bhuri-bhagyam).3 Gods of this world who have realized this truth attain that supreme abode.

Prabodhananda Saraswati comments further, “Govinda is seated on a throne placed on a jeweled podium at the foot of a wish-fulfilling tree in Vrindavana. There he is engaged in various pastimes with his associates. The words marud-ganah refer to these godly devotee companions, for nondevotees have no license to enter therein. Brahma says that he praises the Lord in their company because he identifies so strongly with these eternally liberated knowers of Brahman who have the everlasting association of the Lord.”

For those who aspire to attain Krishna’s abode, his eternal associates are more important than Krishna himself. This is so because they embody the love that the spiritual aspirant desires to attain. This love is itself nondifferent from Krishna, for his appearance in his form of eternity, knowledge, and bliss (sac-cid-ananda–vigraha) beneath the desire tree in Vrindavana is in reciprocation with that love. The two, the pure heart of the devotee and Govinda himself, are one and different simultaneously. The former illustrates how to attain the latter, and the effect lies latent within its cause. Attaining Krishna means attaining love like that of the inhabitants of Vrindavana. Attaching ourselves in service to one of his eternal associates, we experience the full sense of love of Krishna through the medium of such an associate (tad-bhava). This point is appropriately emphasized here, as Brahma concludes his instructions on raganuga–bhakti to the sages.

After his initial enlightenment, Brahma again had the darsana of Krishna when he appeared on earth. At that time, as if playing hide and seek with his devotee, Krishna hid the truth of his divinity from Brahma, much like he did to Arjuna before enlightening him in his Bhagavad-gita discourse. Brahma’s bewilderment (brahma-vimohana) brought out the supremacy of Krishna in no uncertain terms.4 Interfering with Krishna’s lila by kidnapping his young friends and calves, Brahma witnessed Krishna’s power to expand himself into replicate forms of all the stolen boys and calves so precisely that their mothers could not detect that their actual sons and calves were not present. Such is the nature of Krishna’s love for his devotees: he knows their hearts and thus everything about them.5 Seeing this, Brahma was astonished, and all the more so when Krishna caused all the replicated calves and boys to appear before Brahma in innumerable four-armed forms of Narayana, whose lotus navel was his birthplace. Thus Krishna revealed not only that the universe was contained within himself, but that innumerable universes were within him as well as innumerable forms of Narayana from whom the universes originally emanated. Brahma’s use here of the word visva-rupa indicates that he is remembering this particular pastime, which had served to underscore his realization of Krishna’s supreme position. Chapters 11–14 of the Srimad-Bhagavatam’s tenth canto, in which the brahma-vimohana-lila is related, are the most important chapters of the text in terms of establishing the Gaudiya tattva of Krishna’s supremacy (krsnas tu bhagavan svayam).