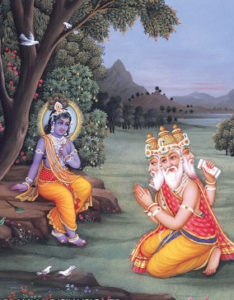 I offer salutations to Krishna, the Lord of the gopis, the master of the cows and cowherds. He is the embodiment of realized knowledge and possesses a form of supreme bliss.

Prabodhananda Saraswati comments, “‘The embodiment of realized knowledge’ means that everything is known perfectly through him.”

I bow down repeatedly to Govinda, [who is also known as] Rama. He is adorned with a crown of peacock feathers; his intelligence is unrestricted. He is like a swan in the pool of the Goddess of Fortune’s, Rama’s, mind.

Govinda’s natural decorations such as his peacock feather crown indicate his unrivaled beauty, which truly needs no ornamentation to shine forth. This is the meaning of his simple decorations of forest wildflowers and unguents made from different colored soils and minerals. Although the peacock feather is a common ornament among Vrindavana’s cowherds, it is particularly dear to Krishna. Thus although Balarama and other cowherds may adorn themselves with peacock plumes from time to time, they do so in imitation of their comrade.

The name Rama in this verse directly refers to Balarama, but it is also indirectly used as an epithet of Krishna, just as it is in the maha-mantra—Hare Krishna, Hare Krishna, Krishna Krishna, Hare Hare / Hare Rama, Hare Rama, Rama Rama, Hare Hare. Prabodhananda Saraswati gives its indirect meaning as “Krishna with the enchanting form, who brings pleasure to his devotees.” When Rama is used as a name of Krishna, it refers particularly to the lover (or ramana) of Radha. This is indicated by the word Rama in this verse, which is an indirect reference to the gopis and Radha, the source of Laksmi. Govinda, like a swan, swims in the pure mind of Radha (Rama).

This verse of Gopala-tapani is reminiscent of the famous verse from the Bhagavatam’s Venu-gita, which attracted the monist Sukadeva to the recitation of the Bhagavatam and marked the beginning of his conversion to Vaishnavism. He subsequently recited it himself to Raja Pariksit.

Wearing a peacock-feather ornament upon his head, blue karnikara flowers on his ears, a yellow garment as brilliant as gold, and the Vaijayanti garland, Lord Krishna exhibited his transcendental form as the greatest of dancers as he entered the forest of Vrindavana, beautifying it with the marks of his footprints. He filled the holes of his flute with the nectar of his lips, and the cowherd boys sang his glories (SB 10.21.5).

In this verse the Vraja gopis are meditating on Krishna entering the forest with his cowherd friends and cows. In the Venu-gita’s seventh verse, they actually begin to voice their love:

O friends, those eyes that see the beautiful faces of the sons of Maharaja Nanda are certainly fortunate. As these two sons enter the forest, surrounded by their friends, driving the cows before them, they hold their flutes to their mouths and glance lovingly on the residents of Vrndavana. For those who possess eyes, we think there is no greater object of vision than this (SB 10.21.7).

In these verses the gopis ostensibly glorify the love of the cowherds for Rama and Krishna, describing the supreme object of vision as the sight of Rama and Krishna entering the forest with their friends and cows. How much better is it, then, to be in that picture and enter the forest along with them? This is the gopas’ great fortune, and this wistful statement by the gopis indicates a certain jealousy toward Krishna’s friends, for whom there are no obstacles to spending the entire day with Krishna. These verses thus support the cowherds’ subjective reality, in which they consider fraternal love to be most desirable.

However, Rama and Krishna together are not the object of love for the gopis headed by Radha. They mention Rama in this verse only to veil their love for Krishna, which they cannot express as openly as the cowherds can. By mentioning Balarama and the cowherds along with Krishna, they dissimulate their conjugal paramour love for Krishna. Furthermore, if a practitioner’s heart follows the love of the gopis, these verses will speak to him accordingly and he will have no difficulty making Balarama disappear from the poetry of this Bhagavatam verse altogether.1 Those in gopi-bhava will hear the gopis in these verses speaking of only Krishna.

In the present Gopala-tapani verse, Brahma says that Govinda’s intelligence is unrestricted (akuntha-medhas). This is a reference to the knowing that is automatic within love: when one loves, one knows what to do. This is the intelligence Krishna gives to his unalloyed devotees (dadami buddhi-yogaµ tam) such that they can overcome all obstacles and come to him even, as in the case of the gopis, in the dead of night.2

Salutations to the Lord who destroyed Kamsa and all his retinue, who killed Kesi and Canura, who is the object of Siva’s prayers, and who is the charioteer of Arjuna.

Kamsa-vamsa-vinasaya refers to Krishna’s destruction of Kamsa and his associates, such as the wrestlers Canura and Mustika. Remembering Krishna today in relation to these demon-slaying pastimes will destroy one’s own evil tendencies. To achieve this result, the sadhaka must think deeply and introspectively on the significance of these lilas and make a conscious effort to remove from his heart whatever is unfavorable for spiritual culture.

After Krishna defeated Siva’s devotee Banasura, Lord Siva recognized Krishna’s supremacy and prayed to him. This lila is referred to here with the words vrsabha-dhvaja-vandyaya.3 As Partha-sarathi, Arjuna’s charioteer, Krishna demonstrates his most endearing quality of loving submission to his own devotees, bhakta-vatsalya.

Salutations to the cowherd who is addicted to playing his flute, who defeated the snake Aghasura, who enjoys playing on the banks of the Kalindi, and who wears swinging earrings. ((Prabodhananda Saraswati cites the alternative reading, valgave for dharine, which emphasizes the added charm brought by Krishna’s earrings rather than their simple presence.))

One of the most charming aspects of Krishna’s lila is his flute playing, which has amazing powers. Krishna is said to have perfected this art on the full moon night of the harvest moon. At that time he was able to attract the gopis and Srimati Radharani in particular to join him in the forest by sounding the fifth note of his flute. Each gopi heard her own name called when this sound entered her heart through the right ear. This sweet sound awakened such identification with Krishna that all the gopis were able to abandon all their household duties—even the nursing of their infant children—without a second thought. The fifth note of Krishna’s flute is identified with the kama-gayatri mantra, which is to be chanted in connection with the Gopala mantra. Thus there is a connection between Krishna’s flute and spiritual initiation (mantra-diksa), both of which exercise a fascinating and attractive power on all living entities.

In the poetry of the Vrindavana Goswamis, the slaying of Aghasura, commemorated in Krishna’s epithets like Agha-damana,4 Agha-bhit,5 Aghahara,6 and so on, are often juxtaposed with Krishna’s lilas of love with the gopis. The word agha means sin, and Aghasura symbolizes the composite of all sin. Love of Krishna results in the removal of all sin.

I make repeated salutations to Sri Krishna, garlanded by the lotus eyes of the cowherd girls, the joyous dancer who protects those who surrender to him.

According to Sri Prabodhananda, the lotus eyes of the gopis are compared to Krishna’s perpetual garland because they are always fixed on him.

I offer repeated salutations to the incomparably great Sri Krishna, who cannot be divided, in whom there is no illusion, who cannot be equaled, who is pure, and who is the enemy of all impurity.

Prabodhananda Saraswati explains that the word niskala means “free from maya.” It literally means “without parts.” Thus he implies that freedom from illusion involves transcending material designations (upadhis) and understanding all parts in relation to the whole (advaya-jnana-tattva). Sri Prabodhananda comments that niskala can also mean one who causes others to take up the path of religion. Kalayati means “to enchant,” and the prefix nis means “completely.” Krishna is he who completely enchants all living beings. Such is the force of charm and affection by which he draws others to dharma. He is enchanting because of his adeptness in the art (kala) of love. Prabodhananda Saraswati offers yet a third meaning for niskala: “One around whose neck hangs (lati) a golden ornament (niska).” Krishna wears such an ornament in the form of a locket holding a picture of Sri Radha, just as Radha wears one containing a picture of Krishna.

The word vimoha indicates that Krishna is so far beyond illusion that he cannot be bewildered by great gods like Brahma, who tested his powers to delude Krishna during the brahma-vimohana-lila only to find him entirely impervious to them. Indeed, the gods themselves are bewildered by Krishna (muhyanti yat surayah).7 While he is completely transcendental to illusion, he nonetheless appears like a human being subject to the delusions of love. Thus he is also bewildering even within the context of giving enlightenment. Krishna is so high that he appears low, so enlightened that he appears deluded.

Visvanatha Cakravarti Thakura maintains that Krishna’s being the enemy of impurity (asuddha-vairin) implies that he removes material impurities from the hearts of those attached to hearing and chanting his glories. In this he has no equal, and indeed Brahma says here that no one can equal him in anything. This is so because he is svayam bhagavan.

In the midst of offering Krishna praise and remembering his wonderful lilas, Brahma spontaneously demonstrates the effects of such salutations. Contemplating and praising Krishna’s greatness—both the majesty of his Godhood and the charm of his subordination to love—the great, highly intelligent, four-headed Brahma realizes his own insignificance and breaks down in tears.

The words vyadhi and adhi represent the sum and substance of material life. Physical pain (vyadhi) is the inevitable result of pursuing material desires, whereas one experiences mental pain (adhi) when such desires remain unfulfilled. The solution to this predicament is to take shelter of Krishna, as Brahma teaches by his own example in this verse. Brahma is, in fact, a great devotee who demonstrates his humility with this prayer, and any suffering he feels is born of feelings of love in separation from Krishna.