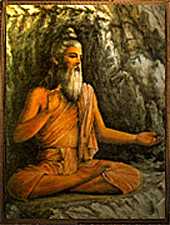 They gave the brahmana a most desirable sweet rice pudding with clarified butter. Durvasa happily ate the sweet rice, then gave the girls his remnants and blessed them before giving them permission
to return.

The word abhuktva in this verse indicates that Durvasa ate everything the gopis offered him. The implication is that he was completely satisfied with them. Thus he thought, “These girls are Krsna’s beloveds. It is through good fortune that today I have been able to eat foodstuffs cooked by their hands, which they have brought to me personally.”

While Durvasa was well aware that Krishna was the Supreme God and that the gopis were his dearmost devotees, the gopis themselves were not conscious of these truths. Absorbed as they were in spiritual love of Krishna, the gopis experienced a kind of divine ignorance that suppressed the divinity of Krishna for the sake of intimacy. Durvasa felt honored by the gopis’ presence. He gave them permission to go, but out of great respect for them otherwise remained silent.

[The gopis asked Durvasa:] How can we cross the Yamuna to get back?

Here the gopis seem to think that Krishna’s instruction was only valid for crossing the Yamuna to see Durvasa, but not for returning. Thus they ask Durvasa how they will return, faced with having to cross the Yamuna to do so. Durvasa’s reply in the following verse is similar to Krishna’s instruction, and as Durvasa subsequently explains, both his and Krishna’s cryptic answers address foundational spiritual truths. Realizing these truths makes all things possible.

[The sage said to the gopis:] Think of me as having eaten nothing but durva grass and the river will make a path for you.

The word durvasinam means either one who has eaten durva grass or one for whom foodstuffs have remained distant (dure asanam yasya tam)—i.e., one who has fasted. Thus Durvasa replies to the gopis, “If you think of me as one who has fasted, the river will part and give you passage.”

Although the gopis were about to depart, Durvasa’s answer caused them to pause and question him about the significance of the similar instructions he and Krishna had given them. How could Durvasa be said to have fasted after eating what they had offered him? What was the mystic truth behind the apparently contradictory statements made by both Durvasa and Krishna?

The best among the gopis, Gandharvi, spoke to the sage after considering several questions with the other gopis.

In this verse the best among the gopis, Gandharvi, is introduced. As will be mentioned in verse 13, all the gopis accepted the leadership of Gandharvi. The Gaudiyas consider these verses to be sruti-pramana—scriptural evidence from the Upanisads (as opposed to that found in the smrti literature such as the Puranas)—for the primacy of Radha over all the other gopis.

The idea that Radha is the best of the gopis is clearly mentioned in the Padma Purana and other smrti texts. It is also mentioned covertly in the Bhagavata Purana (10.30.28). Drawing on this text of Gopala-tapani, Sri Rupa Gosvami refers to Radha by the names Gandharva and Gandharvika in his Ujjvala-nilamani (7.51, 11.96). In Ujjvala-nilamani 4.4 he cites this Gopala-tapani text as evidence from the Upanisads that one of the gopis is considered preeminent. Gaudiya acarya Srila Bhaktisiddhanta Sarasvati Thakura was fond of this epithet for Radha, as it underscores the sober Upanisadic basis of the Gaudiya doctrine, in which the divine service of Radha constitutes the zenith of spiritual attainment.

[Gandharvi asked:] How can Krishna be called a brahmacari? And how can you be said to be a fasting sage?

Having made Gandharvi their spokeswoman, the other gopis simply stood behind her and remained silent.

[Durvasa answered:] Sound is the quality present in space. The atma is distinct from both sound and space. Space is situated in that atma, and the atma is in space. That very same space, however, does not know the atma. Since I am verily that atma, how can I be considered an enjoyer?

Form is the quality present in fire. The atma is distinct from both form and fire. Fire is situated in that atma, and the atma is in fire. Fire, however, does not know the atma. Since I am verily that atma, how can I be considered an enjoyer?

Flavor is the attribute of water. The atma is distinct from both flavor and water. Water is situated in that atma, and the atma is in the water. The water, however, does not know the atma. Since I am verily that atma, how can I be considered an enjoyer?

Durvasa answers Gandharvi’s questions with Upanisadic wisdom, and thus from deep within the esoteric lila of Krishna, Gopala-tapani speaks to us about a fundamental spiritual principle: there is a categorical difference between the soul and the body, consciousness and matter. It is also noteworthy that the charm of Krishna lila is grounded in spiritual knowledge and thus has the power to bring about disenchantment with material life and extricate the soul from its worldly entanglement.

In answering Radha, Durvasa gives an example here and in the following verse to illustrate that the soul is different from the body. The example shows that the soul is not the enjoyer and experiencer of sense objects, for only the senses and the sense objects are interacting as the soul looks on. If this is true for the materially conditioned soul, how much more is it the case for self-realized souls and God himself? The distinction between self-realized souls and materially illusioned souls, as well as the distinction between the individual soul and God, lies ahead in this important section.