Gopala-tapani Upanisad: “Krishna is a Brahmacari” 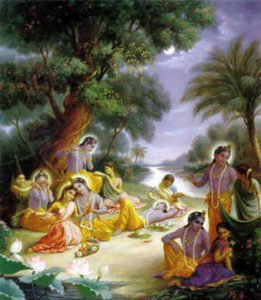 Prabodhananda Saraswati paraphrases Krishna’s thoughts as he answers the gopis: “On the pretext of offering food to Durvasa, I am sending the gopis to him. However, Durvasa will explain to them the nature of their desired perfection in life. Durvasa received an understanding of my Gopala-tapani in disciplic succession from Brahma and Narayana, and having recently come to live for some time in this land of my appearance, he has developed affection for the gopis. He is well known for being outspoken, so he is sure to tell them exactly what they need to know. Therefore, it is desirable that they be instructed by no one but him.”

Not all commentators agree on who the Durvasa of Gopala-tapani is. While some feel that he is not the Durvasa of Mahabharata and Bhagavata Purana fame, who is a partial incarnation of Siva, others disagree, despite Durvasa’s well-known enmity toward Krishna’s devotees, such as the Pandavas and Maharaja Ambarisa. This opinion seems to be confirmed in text 7, where Durvasa is identified as “the fiery-tempered son of Rudra.”

[The gopis said:] How will we be able to cross the Yamuna’s waters to achieve our goal?

The gopis were residing on the southern side of the Yamuna, and Durvasa lived on the northern bank. If the gopis were to serve the sage, they would have to cross the river. There were no boats, and the current of the Yamuna was swift, her waters deep. It is likely that the gopis did not even know how to swim. Prabodhananda Saraswati hears the gopis say, “We would be unable to cross even a shallow pool, what to speak of a wide river filled with whirlpools and high waves.” Thus the gopis ask Krishna how they will be able to cross the Yamuna.

The words sreyo bhavati in this verse indicate that while ostensibly the gopis wanted to attain the benediction of marrying the cowherd Krishna, their desire for union with Krishna represents the ultimate spiritual ideal. The word sreyah indicates “ultimate benefit,” as opposed to the immediate superficial benefit of material gain.

It is also implied in this verse that the gopis believed that Krishna could do the impossible—that he was wonderful in every respect. They were aware that at Krishna’s childhood name-giving ceremony Gargamuni had indicated that Narayana (God) would do wonderful things through him.1 They had also heard of Krishna’s miracles from his cowherd friends.

[Krishna answered:] Just say that Krishna is a brahmacari, and the river will give way.

By answering the gopis in this way, Krishna planted a seed of doubt in their hearts that will be fully resolved later when they inquire from the learned Durvasa. Krishna’s answer seems preposterous, and not for the obvious reason that it is extraordinary for a river’s current to part merely by uttering something. After all, the gopis had seen many miracles, which they attributed to the well-known fact that Narayana had graced Krishna with his powers. The cause of the gopis’ hesitation was that Krishna had just spent the entire night in the forest with them. How could he be a celibate student?

While words of truth have power, what power is there in stating an untruth? Still the gopis believed that following Krishna’s instruction would bring about the desired result. They did not understand how he could be considered a celibate, but they were charmed by him nonetheless. Thus after hearing the following verse, in which Krishna offers a partial answer by speaking of his prowess, they followed his advice.

Sri Prabodhananda comments that some manuscripts of Gopala-tapani offer an alternate reading of this text: niskamah sakamo bhavati, which means that someone who is an atmarama, a spiritually self-satisfied soul, becomes filled with desire to see Krsna upon remembering him. He also offers a novel understanding of the word asrotriya, which in its conventional use refers to one who is not learned in the scriptures, or one who has not heard sufficiently from the Vedas. He says that here asrotriya refers to one who is devoid of the sense of hearing and by extension devoid of all sense powers. He cites as examples the atmarama, whose senses are controlled and not in touch with sense objects, and the lower non-moving forms of life, such as trees. Such souls gain a sense of hearing by the influence of Krishna’s flute or the spiritually potent recitation of his lila.

In Srimad-Bhagavatam, Sukadeva is an example of an atmarama whose spiritual senses became awakened and attracted to the lila of Krishna, underscoring the post-liberated status of Krishna lila. The Srimad-Bhagavatam also gives evidence that remembrance of Krishna causes the non-moving beings to move: “From forest to forest, as Krishna and Balarama lead the cows with the help of the other cowherds, they play sweet tunes on their flutes causing the moving creatures to become paralyzed while the unmoving creatures tremble in ecstasy. How beautiful they are with their ropes and sticks and other cowherd paraphernalia!” (SB 10.21.19)

Prabodhananda Saraswati’s explanation of the two kinds of asrotriya represents the two ends of the spectrum of living beings: those that are liberated and those that are bound. The former, out of spiritual knowledge, do not move in relation to ephemeral objects, whereas the latter, out of ignorance, do move in relation to ephemeral objects. Neither, however, is acquainted with the post-liberated movement of spiritual love at the heart of reality. Thus all living beings truly come to life only after coming in contact with Krishna. Such contact involves making a connection with his devotees, who give the Gopala mantra and kama gayatri—the fifth note of Gopala Krishna’s flute—and explain its significance through discourses on the narrative of Krishna lila.

As soon as they heard these words, the gopis remembered the fiery-tempered son of Rudra (Durvasa) and, doing as Krishna had told them, crossed over the Yamuna. Upon their arrival at that great sage’s most sanctified hermitage, they offered him their obeisances.

Although the gopis had not fully understood the import of Krishna’s contention that he was celibate, being inspired by the affirmation of his prowess, they nonetheless uttered the words “Krishna is a brahmacari” as he had told them to. The Yamuna then immediately gave them passage.

Their initial hesitation to follow Krishna’s instruction arose partially from Krishna’s claim to celibacy and partially from their knowledge of Durvasa’s reputation for having a fiery temper. Krishna’s description of his extraordinary prowess enabled them to overcome their fear of Durvasa, who, being extremely religious and filled with mystic insight, might have cursed them for their trysts with Krishna. Thus they went to him and offered him respect, food, and service without any reservation. In actuality, the gopis’ spiritual standing surpassed that of Durvasa, but the lila of Krishna dictated that they serve and learn from him.

One Response to Gopala-tapani Upanisad: “Krishna is a Brahmacari”