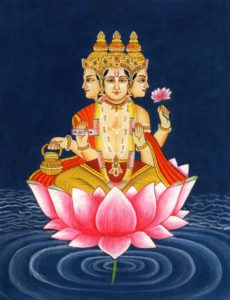 Gandharvi then asked: How did Gopala come to take birth among us cowherds? And how did you, O sage, come to recognize him for who he is? What is his mantra? What is his place, and how did he take birth as the son of Devaki? Who is his older brother, Rama? By which rituals should this Gopala be worshiped? And how could this cowherd, who is the soul of all and is beyond material nature, have descended onto this earth?

Durvasa will answer these questions by referring to a conversation between Brahma and Narayana, which Brahma himself related to him. Brahma’s conversation with Narayana makes up the balance of this Upanisad. Gandharvi’s first question will be addressed in texts 25 and 35, the second in text 38, the third in text 36, the fourth in text 25, questions 5 and 6 in text 35, question 7 in text 36, and question 8 in text 25.

Durvasa answered: In the beginning, only Lord Narayana existed. The worlds were contained within him, interwoven in him like the thread in a cloth. Born in the lotus of his heart, Brahma performed austerities until Narayana awarded him a boon. Brahma asked for permission to pose any question he chose and Narayana granted him this wish.

The beginning referred to in this text is the time prior to the manifestation of the material world, when the cosmos lie within Narayana like a web within a spider, waiting to manifest once again. Narayana is the form of Krishna from whose navel the lotus of Brahma’s birth sprouted.

In Brahma’s own words (found in SB 10.14.14),1 Krishna is the Supreme Narayana. Narayana means the refuge (ayana) of the aggregate of all beings (nara), whereas Krishna is the refuge of all Narayanas. The Narayana of Vaikuntha is the source of the three Narayanas, or Visnus, who appear in connection with the material manifestation, and this Narayana of Vaikuntha is the vilasa expansion of Sri Krishna, svayam bhagavan.2

The transcendental superiority of Krishna over Vaikuntha’s Narayana is also established in Krishna’s name-giving ceremony (SB 10.8.19). Gargacarya told Nanda that “by dint of his virtues, Narayana is Krishna’s equal,” tasman nandatmajo ’yam te narayana-samo gunai˙. By reading Gargacarya’s statement as a bahu-vrihi rather than a tat-purusa compound, Krishna’s superiority over Narayana is revealed.

The superiority of Krishna over his expansion Narayana is described as follows by Srila Rupa Goswami:

In terms of metaphysical truth (tattva), there is no difference between Krishna and Narayana; in terms of aesthetic rapture (rasa), however, Krishna surpasses Narayana (Brs. 1.2.59).

Both Krishna and Narayana are the same person: God. Nonetheless, Krishna is a superior expression of divinity when we consider these two forms of the Godhead from the vantage point of their capacity to relish and exchange loving sentiments with their devotees.

The lotus-born then began his inquiries: Among all avataras, which is paramount? By which avatara are the people of the world and the gods most pleased? And by remembering which avatara does one become liberated from the cycle of birth and death? How can such an avatara be considered to possess the characteristics of Brahman?

Here Durvasa relates Brahma’s questions to Narayana. In his first question Brahma indicates that there is a gradation within divinity. He wants to know which of the avataras is the supreme personal aspect of Brahman (bhagavan svayam) and what this avatara’s distinguishing characteristics are. Brahma wonders, “Even though all the forms of Godhead are essentially one, being existence, consciousness, and ecstasy, which one is worthy of praise in absolutely every respect? Which one is the source of all being and the soul in all entities? Which is all-pervading and completely pure?”

Brahma then asks, “By which avatara are the people of the world and the gods most pleased?” It should be clear that Krishna and his lila are far more captivating and charming than anything we know about Narayana or any of his avataras. Even the Muslims’ general disdain for the Hindu gods did not stop a number of the Moghul rulers from commissioning artists to celebrate Krishna’s lila in art. The world over, people are charmed by Krishna’s name, form, qualities, and pastimes even without serving and surrendering to Krishna in devotion. Indeed, even the gods and goddesses of Hindu scripture are in no short supply of praise for Krishna.

Brahma’s next question regarding which avatara if remembered leads one beyond birth and death is most perfectly answered by referring to Krishna, who if remembered even in enmity grants liberation. Furthermore, the liberation afforded to certain asuras (such as Putana) is extraordinary.

Brahma’s final question as to how the purna–avatara can be understood to possess the characteristics of Brahman is answered ahead. Brahma’s other questions will also be answered in greater detail.

Lord Narayana then answered Brahma: Just as on the peak of Mount Meru there are seven heavenly or wish-fulfilling (sakamyah) cities, similarly, on the surface of the earth there are also seven cities, some of which are sources of sensual enjoyment, others that are sources of liberation and freedom from desire. Of these, the city of the cowherds, Gopala Puri, is directly Brahman itself.

There are seven well-known cities on earth that are capable of bestowing liberation: Ayodhya, Mathura, Haridvara, Varanasi, Kañcipuram, Jagannatha Puri, and Dvaraka.3 Gopala Puri is another name for Mathura. Any city that can bestow liberation can also bestow material enjoyment. Thus each of these cities is both sakamya and niskamya. However, Sri Jiva Goswami comments that the enjoyments they bestow are the four types of devotional liberation that satisfy one’s spiritual senses: attaining opulence like that of Narayana (sarsti), living in his abode (salokya), serving him personally (samipya), and attaining a form like his (sarupya).

Thus just as there are seven heavenly cities that fulfill one’s material desires, after which one returns to earth, similarly there are seven cities on earth capable of fulfilling one’s material desires. Moreover, these cities grant freedom from material desire and, subsequently, liberation. Furthermore, these cities on earth offer the spiritual enjoyment of devotional liberation. What, then, is the value of pursuing heavenly attainment when earth offers so much more? This is especially true in regard to Mathura, which is in a category of its own.

In this text Narayana distinguishes Gopala Puri, or Mathura, from the six other cities by stating that it is directly Brahman (saksad brahma gopala-puri), even while appearing on earth. Narayana’s glorification of Mathura is for the purpose of establishing that Krishna is the Supreme Brahman. If Mathura is itself saksad-brahma, how much more so is its Deity, Sri Krishna? This is his logic.

In citing Narayana’s reply, Durvasa further establishes that Krishna is the Supreme Brahman—the most complete expression of Godhead. At the same time, he answers Gandharvi’s questions regarding Krishna’s birth among the cowherds, his abode, and the nature of his descent into the material world. Regarding Krishna’s birth among the cowherds, Sri Jiva Go-svami refers to text 22, which preceded Gandharvi’s questions, and states that Durvasa implies in this section of his narration that “Krishna enjoys eternally in your [the gopis’] association. Now in the course of events, he has appeared with you here in this world; this appearance (prakati-bhava) is called his birth. You have become so absorbed in your pastimes with him that you are unable to recognize this.”

Because Krishna is Brahman, his abode is that city which is also Brahman—Mathura—and because this is the city of the cowherds, he is a cowherd. His descent is thus like that of his abode in that he appears in the material world but is not influenced by it. This nature of his descent is clarified by the example of the lotus, which will be given in the following text.

What follows is an extensive glorification of Mathura by Narayana, in which the balance of Gandharvi’s questions are addressed.

This Gopala Puri bestows both sense enjoyment and liberation on all the gods and the inhabitants of this world. Just as a lotus flower sits on a pool of water, so Mathura is situated on this earth, ever protected by Visnu’s sudarsana discus. Therefore, Mathura is verily Gopala’s city.

The beauty of a lotus is not affected by the muddy water of the pond it sits upon. Similarly, the spiritual nature of Mathura is not affected by its appearance on earth. The word hi in this verse indicates certainty in this regard, and the word vai indicates that this conclusion is well reasoned.

Sri Prabodhananda states that there are no special qualifications necessary to enter Mathura, such as detachment from the material world or attachment to Krishna. It is for this reason that Narayana says that Mathura blesses all the inhabitants of the world. Residence in Mathura Puri even as a blade of grass is more auspicious than birth among the gods, including birth as the creator, Brahma.4 Even those who resist devotion to Krishna in Mathura are nonetheless granted devotion. Whatever faults are perceived to exist in Mathura are those of perception, nothing more. Indeed, no sinful reaction arises there when ordinary sins are performed.5