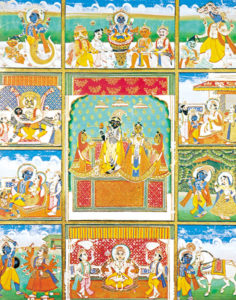 This text implies that Krishna is eternally present in the twelve forests of Gopala Puri. It also informs us that he is present there in twelve different forms and introduces the famed catur-vyuha consisting of Vasudeva Krishna, Sankarsana Rama, Pradyumna, and Aniruddha.

Regarding the twelve different forms, Prabodhananda Sarasvati cites the description in Srimad-Bhagavatam (10.43.17) of Rama and Krishna entering Kamsa’s wrestling arena to fight the wrestlers Canura and Mustika. In Sri Sukadeva’s description, all those who were blessed with the darsana of Krishna saw him differently. Like a priceless gem with many facets, he showed himself in different ways to everyone present. Each of them saw Krishna in relation to one of the five primary or seven secondary rasas. Their varied perceptions bear out the truth of Krishna’s position as rasa-raja, the king of connoisseurs of love. He tastes and is tasted in all five primary and seven secondary flavors of sacred aesthetic rapture (bhakti-rasa).

After citing this Bhagavata verse, Sri Prabodhananda concludes, “This, then, is why there are twelve different forms in the different forests of Mathura-man∂ala.” While it may seem that Prabodhananda Sarasvati is leaning toward an esoteric understanding of this verse in which the twelve Deities are identified with the twelve expressions of sacred aesthetic rapture (rasa), he does not actually say this, nor does the text ahead bear it out. Nonetheless, the fact that the text speaks of twelve Deities and the verse cited by the acarya explaining it involves twelve rasas, all of whom have titulary Deities, leads one to make a connection between the twelve Deities of Mathura and the titulary Deities of the twelve rasas. Indeed, there are a number of other verses that could have been cited to explain this verse that would not have brought this connection to mind and at the same time would have made clear what the text of Gopala-tapani is emphasizing here.1 Thus it is worth considering that the titulary Deities of the twelve rasas may also reside in Mathura-mandala and that this may have been on the acarya’s mind.2 It is certainly acceptable for an acarya to imply this, for more important than what the text itself says on the surface is what it says to such souls.

This possibility aside, the Gopala-tapani text itself emphasizes that God appears to different devotees relative to their approach to him. Thus there are numerous forms of God even as God is essentially one.

The first of these twelve forms is worshiped by the Rudras, the second by Brahma, the third by the sons of Brahma, the fourth by the Maruts, the fifth by the Vinayakas, the sixth by the Vasus, the seventh by the seven Asis, the eighth by the Gandharvas, the ninth by the Apsaras. The tenth is invisible, the eleventh has gone to the Vaikuntha abode, and the twelfth is on earth.

Brahma is perplexed by this section of the text, and in the section beginning with text 75 he will voice his doubts, which Narayana will subsequently address. The basic point Narayana is making here is that the one Supreme God appears in different forms. Of the twelve forms mentioned here, the eleventh is the most important, as will be explained later in this Upanisad.

Those who worship any one of these forms will conquer death and attain liberation. They conquer over the threefold miseries, suffering in the womb, and suffering during birth, old age, and death.

There are a number of verses in this connection: Coming to the lovely land of Mathura, which is always frequented by Brahma and other gods and protected by the Lord’s weapons—the conch, discus, mace, bow, and various clubs—[one is fulfilled].

Prabodhananda Saraswati comments, “Narayana will now recite some mantras that confirm the statements he has already made. As this verse does not make a complete sentence, one should understand the author’s intention to be that ‘those who come to Mathura attain complete fulfillment.’ ”

The powerful Lord Krishna resides there eternally with his three expansions, Rama, Aniruddha, and Pradyumna, and his sakti, Rukmini.

Krishna’s elder brother Rama is his immediate expansion (vaibhava-prakasa), from whom the catur-vyuha consisting of Vasudeva Krishna, Sankarsana Rama, Pradyumna, and Aniruddha expand for the sake of lilas in the city of Mathura. Rama and Krishna are one and the same person. Their complexion and emotional makeup differ slightly, but they are the same Supreme God. Here Narayana tells Brahma that Rama is a member of the catur-vyuha. In subsequent verses he will reveal that Rama is synonymous with the pranava omkara (Om). Thus Narayana speaks here of Rama’s majesty.

By mentioning Rukmini as the sakti of Krishna, Narayana implies that she represents the entirety of his sakti. All of Krishna’s innumerable saktis emanate from his svayam-sakti. Although Krishna’s svayam-sakti is Radha, this sakti appears as Sri Radha in Vrndavana and as Rukmini in Dvaraka/Mathura, rukmini dvaravatyam tu radha vrndavane vane.3

When Narayana says that Krishna resides with his saktis, he implies that Krishna eternally resides in all his lilas with a host of devotees, all of whom are sakti-tattva. One such devotee is his mother Devaki. Krishna’s birth from Devaki is an expression of his avirbhava-sakti, the power to manifest himself. In the Bhagavad-gita, Sri Krishna refers to this power when he says, sambhavamy atma-mayaya: “I manifest by my own power.” Krishna appeared to Devaki in Mathura in a four-armed form. This form is his Vasudeva expansion, a member of the original catur-vyuha mentioned in this verse, which corresponds with the sentiment of his sakti Devaki.

In contrast to his four-armed appearance in Mathura, Krishna appears in Vrndavana in a two-armed form, the form that Gandharvi is most familiar with. This two-armed form is his original form (svayam bhagavan), whereas his appearance before Devaki is a partial manifestation of this form, athaham amsa-bhagena devakyah putratam subhe (SB 1.2.9).

What follows is a more detailed explanation of Krishna’s expansions and saktis, emphasizing the catur-vyuha’s identity with the syllable Om.