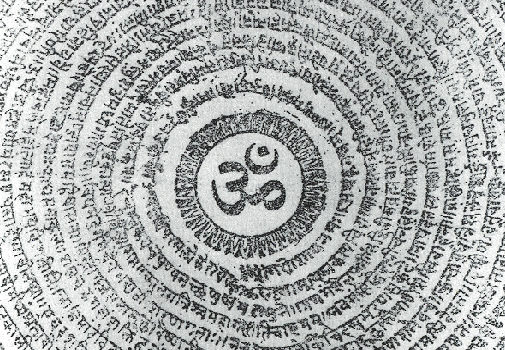 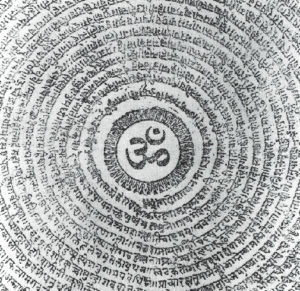 The one is verily made up of four words that are derived from the elements of the syllable Om.

In this verse Prabodhananda Saraswati finds the answers to Gandharvi’s questions concerning the mantra and rituals by which Gopala Krishna should be worshiped. Durvasa, through Narayana’s instructions to Brahma, instructs Gandharvi on the significance of the pranava omkara. The pranava omkara is the seed form of all Vedic mantras, and both precedes and follows their utterance. It contains the essential and singular import of all four Vedas.

The “one” mentioned in this verse is the Supreme Brahman, whom Narayana has equated with Krishna. This one is also known as the fourfold vyuha: Vasudeva Krishna, Sankarsana, Pradyumna, and Aniruddha. They, in turn, are identified with the syllable Om, which consists of the three Sanskrit letters a, u, m, and their vibration. By establishing Krishna’s identity with the catur-vyuha and the catur–vyuha’s identity with omkara, it is clear that Krishna is the Supreme Brahman.

Therefore, in the consciousness that “I am the divine Lord beyond the mode of passion,” one should meditate on the self, [thinking], “I am Gopala.”

It has been stressed earlier in this text (1.14) that bhakti, when purely expressed, includes liberation. Ahead in Gopala-tapani (2.78), we also find that the object of bhakti, Krishna’s form, is eternal, ghanah sac-cid-anandaika-rase bhakti-yoge tisthati: “[His form] is permanently situated in bhakti-yoga, exclusively characterized by eternity, knowledge, and bliss.” Gopala-tapani (2.73) also states, sa mukto bhavati tasmai svatmanam ca dadami vai: “Once he is liberated, I most certainly give myself to him.” The act of giving oneself is not possible if the giver and receiver are absolutely one.Thus both the beginning and the end of this Vaishnava Upanisad teach a devotional form of Vedanta in which the liberated perfection of life involves an eternal relationship between God and his devotees.1

In the case of Gopala-tapani, the beginning and end of the text teach us that the individual soul and God experience a dynamic union in love in which the two, while one in will, nonetheless remain distinct from one another. Thus here in its middle portion this Upanisad is not teaching something different, such as the notion of absolute identity between the individual soul and Brahman. Indeed, no Vaishnava sect teaches that the individual soul and Brahman are one in all respects. Thus the meditation (so ’ham/gopalo ’ham) recommended in this verse must be understood in light of Vaishnava philosophy and the context in which it appears in the text itself. The spirit of this meditation is: “My existence is to God’s as the rays of the sun are to the sun itself. The satisfaction of the root of existence results in the complete satisfaction of the twigs and branches; in this consciousness, whatever is to be done for oneself should be done as an offering to him.”

Vedanta-sutra 4.4.17 (jagad-vyapara-varjyam) offers scriptural evidence in support of the Vaishnava position on the difference between the individual soul and God. The phrase jagad-vyapara-varjyam states that the liberated soul has the powers of God “with the exception (varjyam) of the power to create (vyapara) the world (jagat).” Another sutra worth citing is 3.3.46, purva-vikalpah prakaranat syat kriya manasavat: “This so ’ham is a form of that previously mentioned (bhakti), because of the context [in which it appears in the Upanisads], just as worship, meditation, and so on, [are forms of bhakti].” Sutra 3.3.47 then goes on to establish that the individual soul and Brahman are not one in all respects. There, Badarayana writes, atidesac ca: “And on account of comparison.” By this he means that in the Upanisads God’s relationship with his devotees is compared with the relationship that Brahma has with his sons. Thus just as Brahma’s sons are dear to him and one with him in this sense, they are still his sons and thus not one with him in every respect. Similarly, God’s devotees are dear to him and in this sense one with him, yet being his devotees they are not one with him in every respect. For example, in Gopala-tapani 2.49 Narayana says to Brahma: “My devotee is dear to me just as you are to your sons, Rudra is to his associates, and I am to Laksmi.”

To further explain the appropriate orientation to the meditation recommended in this verse, Prabodhananda Sarasvati refers to the meaning of a similar mantra, asav adom. This mantra says that the Supreme Soul (asau) is one with the individual soul (adah), yet it goes on to qualify this statement with the word Om. Here Om indicates Brahman/Gopala, the root of all existence, and thus according to Prabodhananda Sarasvati, this mantra teaches that the jiva and God are one in the sense that God is the origin of the jiva, just as the sun is the origin of its rays.

The Puranic record also supports the Vaishnava understanding of this text. In Srimad-Bhagavatam, which is clearly the most sophisticated theological treatise among the Puranas, we find the milkmaids of Vraja chanting so ’ham at the height of their love in separation from Gopala Krishna. After Krishna disappeared from the circular love dance, the gopis, lost in thought of him, declared themselves to be Krishna (asav aham) (SB 10.30.3). However, even as they declared themselves to be Krishna, they were searching for him. They did not actually become Krishna, for if they had there would have been no further possibility to enjoy rasa with him for which they were so eager. Thus their feelings of oneness with him are described in the same Bhagavata verse as being vibhrama, mistaken. Theirs was a case of mistaken identity caused by love. Moreover, vibhrama means beauty. Thus they experienced a nuance of love within a beautiful pastime (vibhrama-vilasa) of lover and beloved. In Ujjvala-nilamani 11.28–30, Rupa Goswami identifies this nuance as the anubhava called lila, which he understands in this instance to mean “imitation of the beloved.”

Such a person enjoys the liberated state. He attains the status of Brahman. He becomes a knower of Brahman.

The result of perfecting the devotional meditation recommended in the previous verse is described here: one attains liberation by being delivered from the karmic web of ignorance, one attains divine status, and one comes to know Brahman in the fullest sense. Knowing Brahman in the fullest sense is understood to be knowing him as Gopala Krishna, since the recommended meditation specifically refers to him (gopalo ’ham) and not a generic sense of Brahman. Prabodhananda Saraswati comments that attaining the status of Brahman means realizing a spiritual relationship with Brahman in which one possesses a form of pure consciousness. Being delivered from the negative influence of karma and attaining one’s spiritual identity constitutes the twofold standard of mukti (liberation) spoken of in the Bhagavata Purana (2.10.6), muktir hitvanyatha-rupam svarupena vyavasthitih. Bhagavad-gita (18.55) speaks of this twofold development as well when Krishna tells Arjuna that by attaining Brahman (brahma-bhuta) one transcends the material conditions of hankering and lamenting (na socati na kanksati) and thus becomes qualified for a life of devotion proper (mad-bhaktim labhate param).

The svarupa (spiritual form) of the liberated soul exists eternally in a dormant condition and is awakened through the cultivation of bhakti. Sri Jiva Goswami says the following about this form in his Priti-sandarbha (10): “In the spiritual world, there are innumerable spiritual forms expanding from the effulgence of Bhagavan. When liberated souls attain these forms, Bhagavan enjoys pastimes with them.” Each of these spiritual forms is constituted of eternity, knowledge, and bliss. These forms are embodiments of Krishna prema, through which liberated souls participate in Krishna lila. They exist in a dormant condition prior to the individiual soul’s attainment of liberation and are activated by the grace of Bhakti-devi. Caitanya-caritamrta explains the same idea thus, nitya-siddha krsna-prema ‘sa-dhya’ kabhu naya sravanadi-suddha-citte karaye udaya: “Love of Krishna exists in eternal perfection. It is not something that is ‘attained’ [as the fruits of karma are]. By engaging in hearing and other forms of bhakti, one’s consciousness is purified and prema awakens.”

It is important to note that the spiritual svarupa of the jiva is manifest in an act of grace. Regardless of how hard or how well one practices meditation on one’s svarupa, actual svarupavesa is entirely dependent on revelation. It is sva-prakasa, self-manifest. Therefore saranagati, the surrender of resigning oneself to a life of devotion, must be emphasized more than anything else for those who desire to attain their svarupa.

Other than the first two fruits derived from worshiping Gopala Krishna, deliverance from karma and attainment of spiritual identity, which can also be attained by worshiping other forms of Godhead, a third fruit pertains to his worship alone: knowledge of Brahman in the form of Gopala Krishna, who represents the heart of Brahman—Brahman in full, appearing in humanlike form (narakrti param brahma).2

One Response to Gopala-tapani Upanisad: “I am Gopala”