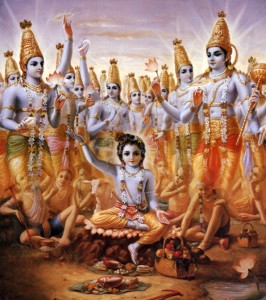 Brahman is pure existence, the universal form, and light. He is all-pervasive and one without a second, but through maya he becomes fourfold.

Brahman is pure existence, which is joyful and thus free from all misery. Through his sakti he becomes the form of the universe (visva-rupam). It is stated in the Vedanta-sutra that Brahman’s motivation for expanding himself as the universe is to express joy in the form of divine play (lokavat tu lila kaivalyam), the lila of creation (srsti-lila).

The word visva also means unlimited, and the word rupam can be extrapolated to include not only form but also attributes, pastimes, and powers. In this sense, Brahman is said to be pure existence that is possessed of unlimited form, attributes, and powers by which he engages in limitless pastimes. Being light (prakasa), he reveals himself everywhere for the benefit of others and is thus all-pervading (vyapaka).

The four characteristics attributed to Brahman in this verse are personified by the four aspects of the catur-vyuha. Vasudeva Krishna personifies pure consciousness (satta-matra), Sankarsana (Rama) personifies existence (visva-rupam), Pradyumna personifies revelation (prakasa), and Aniruddha personifies all-pervasiveness (vyapaka). Vasudeva is further identified with Narayana, Sankarsana with Maha Visnu, Pradyumna with Garbhodakasayi Visnu, and Aniruddha with Ksirodakasayi Visnu. These four are further identified with consciousness, ego, intelligence, and mind, respectively, as well as with the four directions.

Sri Jiva Goswami comments that the word maya is defined in the Visva-prakasa lexicon as both pride and mercy, maya dambhe krpayam ca. While it is commonly used to indicate the external sakti of God, here it indicates his internal energy dwelling in the hearts of his devotees. By his internal sakti and out of mercy for his devotees, the singular Brahman becomes fourfold, appearing in various forms that correspond with his devotees’ love for him.

Aniruddha is identified with the prajna state and is produced from the letter m, the third element of omkara. The half syllable that cuts off the vowel is Krishna, in whom the entire universe is seated.

Having established Brahman’s identity with Om, Narayana begins to explain how the four Deities of the catur-vyuha are contained within this sacred syllable and how they manifest from it. Om represents the entire conscious reality manifest in the four stages of waking, dreaming, deep sleep, and beyond. The first three of these represent covered material stages of consciousness, while the fourth represents enlightenment.

The four Deities of the catur-vyuha contained within the syllable Om are the tutelary Deities presiding over these four stages of consciousness. Srimad-Bhagavatam 12.11.21–22 describes this as follows:

Vasudeva, Sankarsana, Pradyumna, and Aniruddha are the names of the direct personal expansions of the Supreme Godhead, O brahmana Saunaka.

One can conceive of the Supreme Personality of Godhead in terms of awakened consciousness, sleep, and deep sleep—which function respectively through external objects, the mind, and material intelligence—and also in terms of the fourth, transcendental level of consciousness, which is characterized by pure knowledge.18

Vasudeva Krishna presides over the fourth, or enlightened, stage of consciousness. He is represented by the entire omkara. Sri Prabodhananda comments that the half syllable mentioned in the verse “refers to the entire pranava taken as a whole, because it cannot be pronounced on its own. Thus by this device of equating Krishna with the pranava as a whole, it is indicated that he is the complete manifestation of the Supreme Person. Therefore, Narayana says, ‘in whom the entire universe is established.’ ” Another thing to be noticed about the language of these verses is that rather than using the word sambhava (produced from) as in the previous three lines, in this last line the word atmaka is used to denote the direct relationship of the letter to the divine manifestation. This gives added glory to the pranava in its entirety by emphasizing its nondifference from Krishna.

Man∂ukya Upanisad 9–12, which it appears a number of commentators have drawn from in commenting on this verse, concludes its discussion on the four stages of consciousness as follows: “The word Om as one sound is the fourth state of supreme consciousness. It is beyond the senses and the end of evolution. It is nonduality and love. He goes with his self to the Supreme Self who knows this, who knows this.”

Having Krishna as her essence, Rukmini is the basis of the material nature (mula-prakrti) and the creator of the universe. Based on the revealed knowledge (sruti) arising from the questions of the women of Vraja and also on account of her being associated with Brahman, Krishna’s potency (Rukmini) is identified with pranava by the Brahmavadins.

Having explained how the catur-vyuha is inherent within omkara, Narayana goes on to explain how Krishna’s principal sakti also inheres therein. She is represented alphabetically within omkara by the bindu, and theologically speaking she is present because God and his sakti are nondifferent, just as energy and its energetic source are one.

Sri Jiva Goswami comments elsewhere that some philosophers think that maya is only that aspect of Brahman that manifests the world, which they, in turn, think is ultimately unreal (asat). Sri Jiva says, however, that they are mistaken and cites several verses and Sanskrit lexicons to establish that the word maya, while referring to the illusory world of material names and forms, also refers to God’s spiritual energy (cit-sakti). Here, this sakti is addressed as Rukmini and described as being Krishna’s essence, the basis of the material energy, and the creator of the universe.

Sri Jiva also explains that the use of the name Rukmini does not refer to her alone but to the internal sakti of Krishna in general. In this connection, he cites the following statement that he attributes to both the Matsya and Skanda Puranas, rukmini dvaravatyam tu radha vrndavane vane: “The svarupa-sakti appears in Dvaraka as Rukmini and in Vrndavana as Radha.”

Thus by extension it can be concluded that the name Rukmini used in this verse includes other forms of Krishna’s internal sakti and Sri Radha in particular since the Gopala-tapani deals ultimately with the kind of bhakti that is centered on Krishna’s original form, the form standing next to Radha. However, because the subject here is overtly the catur-vyuha, Rukmini’s name is mentioned, as she is the manifestation of Krishna’s sakti in relation to his form within the catur-vyuha.

The primacy of Radha, however, is further implied in this verse when Narayana attributes this Upanisad to the questions of the gopis headed by Gandharvi.19 Without their questions and level of interest in Krishna, this text would not be known to human society. They are not interested in Krishna’s appearance within the catur-vyuha; they are attached to him in his original form, the most complete expression of Parabrahman.

Jiva Goswami comments elsewhere that para means “supreme” and ma means “mother.”20 The gopis are the supreme mothers who rightfully stand next to Brahman, making him whole. They alone, and among them Radha in particular, can reveal all there is to know about him. Indeed, it is for her sake—to shed light on the measure of her love—that Krishna manifests as the catur-vyuha and conducts his lila in Mathura and Dvaraka. In these lilas he apparently leaves her behind, but under scrutiny it becomes clear that he did so only to highlight her love in separation as surpassing all other expressions of love for him and endearing him the most. Thus it should be clear that she is his svayam-sakti, and as much as he is represented within the pranava omkara, so too is she.

Prabodhananda Saraswati comments further in this regard that the words vraja-stri can be read as connected to the previous line, breaking up the word vraja-stri-jana-sambhuta. The verse then reads, “Having Krishna as her essence, Rukmini is the basis of the material nature and the creator of the universe. She is a woman of Vraja. In the srutis that were produced among the people, her association with Brahman is celebrated. For this reason and because the pranava-mantra glorifies the divine nature, the Brahmavadins call her prakrti.” This reading—“She is a woman of Vraja”—serves to further emphasize the position of Radharani in terms of her being the supreme manifestation of Krishna’s sakti (svayam-sakti), even while Rukmini’s name is used in the verse.