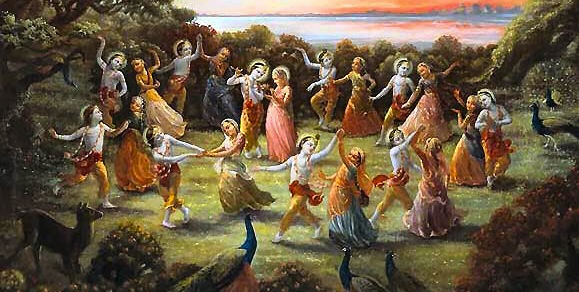 Therefore, Gopala, in whom the entire universe is situated, proceeds from the omkara.

This verse concludes uttara-tapani’s instruction on the significance of oµkara in relation to Gopala Krishna and the catur-vyuha, which began with verse 37. “Therefore” (tasmat) marks the conclusion. The word visva-samsthitah can also mean that Gopala Krishna manifests in different forms or that all forms are within him.

Those who are knowledgeable about Brahman utter the syllable klim in the understanding that it is one with Om. All who meditate on me, especially those in the land of Mathura, enjoy the state of liberation.

This verse prefaces Narayana’s instructions on puja and meditation that begin with the following verse and conclude in verse 62 with the words venu-srnga-dharam tu va. In this preface Narayana stresses the value of puja and meditation performed in Mathura, making it clear that location influences one’s spiritual practice and that the best location in which to worship and meditate on Gopala Krishna is Mathura.

The liberation spoken of here is freedom from obstacles in attaining Krishna. The two seed mantras om and klim have the identical essence, identical power, and designate the same reality. Thus the foregoing analysis of the pranava omkara also applies to klim.

One should visualize me situated on a blooming, eight-petaled lotus in the heart and meditate on my feet, which are marked with the divine signs of the flag and parasol.

[Meditate on me] with the sign of srivatsa on my chest, with the effulgent kaustubha jewel over my heart, and holding with four arms my weapons and symbols: the conch, discus, bow, lotus, and mace.

In his four hands Narayana sometimes holds five articles. At such times he holds the lotus and bow in the same hand. At other times, he places the bow before him and holds only four articles.

[One should meditate on me] decorated with armbands, a beautiful garland, an effulgent crown, and dangling, dolphin earrings.

In his commentary on the Damodarastakam of Padma Purana, Sanatana Goswami states that the gopis consider Krishna’s earrings his most fortunate ornaments because they are free to kiss his cheeks on a regular basis.

One should always meditate on me in this effulgent form, which is beautiful and awards fearlessness to my devotees. Or, alternatively, one should meditate on my form holding a flute and buffalo horn.

Here Narayana concludes his description of the meditation he recommends to Brahma. Having described himself in the previous verses, in this verse he suggests as an alternative that one can meditate on svayam bhagavan Sri Gopala Krishna, who bears the flute and buffalo horn in his two hands. Gopala Krishna is crowned with a colorful peacock feather, garlanded with forest flowers, and decorated with different colored clays from the rich Vrndavana soil. His sweet and charming attire is less majestic than that of Narayana.

The two separate meditations recommended in these verses differentiate the vidhi-marga from the raga-marga, both of which, as we have seen, are discussed throughout Gopala-tapani.

The name Mathura has been given to this land because the manifest essence of the knowledge of Brahman, by which the entire universe has been churned, appears there.

Verses 58 and 59 spoke of meditating on Krishna while residing in Mathura, if not physically, at least within one’s heart. Before Narayana begins to speak about meditating on a universal form of himself in which natural phenomena are identified as his bodily parts, he further glorifies Mathura as that place within the universe that, being one with himself/Krishna, brings an end to one’s material entanglement. He also explains why Mathura is so named. All the commentators have written on the etymology of the word Mathura in their explanation of this verse, and in doing so they have taken poetic license.1

The Sanskrit verbal root math means “to churn,” as in churning butter from milk. Sri Prabodhananda Saraswati comments as follows: “The act of churning produces butter from cream; similarly, knowledge of the Supreme Person—the personal form of Brahman—is revealed through the churning of the entire universe. The word va (or) indicates an alternative that is not openly mentioned in the verse, namely bhakti-yoga. The place where both knowledge of the Lord and bhakti-yoga are revealed in their fullest, most perfect manifestation is known as Mathura. In other words, mathura refers to the practices of knowledge and devotion (jnana-bhakti-sadhanam).” He suggests that this meaning derived from the etymology of the word Mathura can be established from the Unadi-sutra.2

This Gopala conquers manmatha (Cupid, who churns the mind). The gopis have referred to him in the midst of their moonlight rendezvous recorded in Srimad-Bhagavatam (10.32.2) as saksan-manmatha-manmatha˙, “He who bewilders or churns the mind of Cupid.” For this reason he is also known as Madana Gopala.

If Cupid churns the world, as he no doubt does, he who captivates Cupid churns the impurity of lust out of one’s heart and leaves pure love of God. This purified substance is the king of knowledge: prema-bhakti (raja-vidya).3 It is this knowledge that makes it possible to understand the world perfectly, transcend it, and enter the land of love.

The status of Krishna as the transcendental Cupid, however, is qualified by the maidservants of Radha. Her parrot sings thus:

The blooming lotus is the earth and is identical with the universe; it grows from the waters of the ocean of samsara and is dwelt in by the eight lords of the directions. It exists in my mind.

Narayana here explains the meditation suggested in verse 58 in terms of the virata-rupa. The earth is an auspicious place within the universe because it offers humanity the opportunity for spiritual practice as well as material enjoyment. The impetus it provides for spiritual advancement is unparalleled throughout the universe because on earth Sri Krishna enacts his humanlike pastimes (nara–lila) and reveals the highest reach of love. Thus the earth dwells like a blooming lotus in the mind of Narayana. Its blooming represents Narayana’s mental blessing, issuing forth in all eight directions throughout the universe. This lotus grows from the waters of samsara and rests above its waves of illusion. Those who wish to contemplate the world as the form of God should think in this way about his mind.