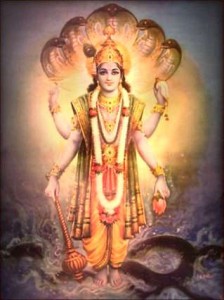 The feet of that universal form are said to be both above and below. The splendors of the sun and moon are the divine flags that decorate them, and Mount Meru is the golden staff holding up the parasol, Brahmaloka.

Here Narayana elaborates on verse 58. Similar descriptions with varying details can be found in Srimad-Bhagavatam. Another description of the visva-rupa is found in the eleventh chapter of Bhagavad-gita. Because this form is considered imaginary, serving as a tool for meditation, differing descriptions are of little consequence.

Both my form and the universal form have their identifying marks, such as the srivatsa. Therefore, I am known to the philosophers of Brahman by the name Srivatsa-lanchana.

Narayana mentioned his srivatsa, a marking on his chest, in verse 60. This mark consists of curling white hairs that approximate the shape of the moon and indicate his relationship with his consort. Sri Jiva Goswami describes it thus: “The srivatsa is said to be either a white mark in the shape of the moon on the Lord’s chest (according to the Gautamiya-tantra) or hairs that curl to the right (according to Bhavartha-dipika and other sources).”

Based on this verse, Prabodhananda Saraswati has further identified the srivatsa as the vairaja-jiva svarupa, or the samasti-jiva of the universal form of God. The samasti-jiva is the collective status of individual souls just prior to their individual manifestations in accordance with the rule of karma.1 The jiva souls are merged in a state of deep sleep (susupti) within Maha Visnu, and when the time for the creation to manifest arises, these jivas move toward differentiation by first appearing as a collective within Brahma and then expressing their individuality in accordance with their latent karma. As mentioned earlier, it is in this sense that the baddha-jiva first takes birth as Brahma. This Brahma, the vairaja-purusa or vairaja-jiva, represents the srivatsa of Narayana when the universe is conceived of as Narayana’s form.

Those who accept that I am God (as the virata-rupa) say that the word and the power of the Lord to illuminate, from which the sun, fire, speech, and the moon have their beginnings, is the kaustubha jewel.

Those who worship the virata-rupa conceive of the celestial lights and speech’s power to illuminate as the kaustubha jewel. In verse 60, Narayana mentions that the kaustubha jewel decorates his chest. This jewel is also considered to represent all jivas, whom Narayana keeps close to his heart. Because the celestial realms give shelter to the pious, they too are considered the refuge of the jivas, as is the illuminating power of speech on account of its capacity to give solace.

The etymology of the word kaustubha is explained by Sri Jiva Goswami as follows: “Ka refers to the sun and fire, due to its similarity with the sun. The letter a refers to the word (vak) due to its being the first sound from which all words are formed. The vowel au refers to the moon, because the word glau (which means moon) partially contains this sound, and the etymologists say apy aksara-samyena nirbruyat, ‘One can also explain the meaning of a word by a similarity of syllables.’ ”

The material ego (ahankara) and the modes of goodness, passion, and ignorance are the four arms [of my universal form]. The hand that holds the conch shell, which is identified with the five elements, represents the mode of passion.

In this verse Narayana explains how devotees of the virat-rupa conceive of his arms, which were previously mentioned in verse 60. He also begins to describe the virat-rupa’s paraphernalia. Three of his four arms represent the three modes of nature. The fourth arm represents ahankara, or the material sense of identity (ego). The hand identified with the mode of passion bears the conch, and the conch itself is identified with the five elements: earth, water, fire, air, and space.

Sri Prabodhananda adds to this the idea that because these modes of nature and the material ego are considered the four arms of the virat-rupa, they are worshipable. In his commentary to the subsequent verses describing the universal form, he concludes that all things conceived of as bodily parts of the virat-rupa are venerable.

The mind, whose nature is exceedingly like that of a child, is said to be the universal form’s discus. The original energy, known as maya, is his bow, Sarnga, and the universe is the lotus situated in his hand.

The mind in and of itself is innocent or pure. However, just as children are colored by their association, and this often at the cost of innocence, the mind becomes colored by its association and loses its purity or neutrality.

Following the description of the conch in the previous verse, this verse continues the explanation of Narayana’s weapons. Sri Narayana identifies the mind with the virata-rupa’s discus. The discus of the virata-rupa is held in his hand that represents the sattva-guna. Both the bow and the lotus are held together in the hand that represents the tamo-guna.2 The bow and lotus in this hand are identified, respectively, with maya-sakti’s power to throw the jiva into illusion (viksepatmika) and the universe itself. Narayana’s description of how devotees conceive of the virata-rupa’s mace continues in the following verse.

The original knowledge is to be known as the mace, which is always situated in my hand. My arm is decorated with divine armlets, praised by the residents of the transcendental world, which are the three goals of life: dharma, artha, and kama.

The original knowledge (adya vidya) is knowledge of the self. Narayana identifies it with the mace of the virata-rupa, which is held in the hand of the universal form of God identified in verse 68 with the material ego (ahankara). The armlets of Narayana, described earlier in verse 61, are identified here in relation to the three common goals of life: dharma (religion), artha (economic development), and kama (sense enjoyment). Prabodhananda Sarasvati comments that the fourth goal, moksa (liberation) is implied in this description. These four are the armlets of the universal form. They are praised by transcendentalists because they are the blessings of life.

The balance of Narayana’s ornaments mentioned in text 61 are elaborated on in the following two verses.

O Brahma, my neck is said to be free of material qualities. It is encircled by my unborn, original energy, which your mind-born sons call a garland.

The neck of the universal form is nirvisesa-brahma and his garland is the covering aspect (avaranatmika) of his maya-sakti.

They also say of me, whose divine form is unchangeable, that I am the crown. My earrings are the supreme aspect of the mutable world.

Here Narayana identifies himself as the crown of the virat-rupa and his earrings with the supreme aspect of the material world, that which brings about the liberation of the living beings from the world’s clutches. Prabodhananda Sarasvati comments on the universal form’s earrings: “In the perishable universe, the two things that are supreme are sankhya and yoga; they are the Lord’s earrings. This is confirmed by the Bhagavata (12.11.11), bibharti sankhyam yogam ca devo makara-kundale: ‘The Lord wears sankhya and yoga as a pair of makara-shaped earrings.’ Wherever different spiritual paths are mentioned in the Vedas or Puranas, it should be understood that the same fundamental teaching is being presented according to different schools.”

Sri Gitopanisad (5.5) describes sankhya and yoga as one because they lead to the same goal. In the Gita these two terms imply contemplative practice and selfless action, respectively. They can also be understood to mean external and internal processes of self-realization. In this understanding, sankhya involves distinguishing the self from material nature through an external process of elimination, whereas yoga speaks of an internal process of elimination beginning with yama-niyama and ending in samadhi. In either case, the fulfillment of these two well-known systems is a passport to leave the material atmosphere, whereas Bhakti-devi herself is the visa to Krishna lila.

This is an important verse in which this Upanisad once again makes it clear that love of God is a postliberated status. This was stated earlier in the commentary to verse 38 of the uttara-tapani. Furthermore, Baladeva Vidyabhusana cites it in his bhasya to Vyasadeva’s Vedanta-sutra 3.3.47. This sutra, atidesac ca, establishes that there is an eternal distinction between the individual soul and Brahman, even while the two are united in love. Here Narayana says it thus: “Once my devotee attains liberation, I most certainly subordinate myself to him.

O Brahma, all that I have spoken to you regarding the two types of form, saguna and nirguna, will come to be.

The fruit of the meditation Narayana has been describing is delineated in this and the preceding verse, bringing this section to its conclusion. Two types of meditation have been prescribed for those initiated into the chanting of the Gopala mantra, one leading to the other. Meditation on the virat-rupa, described in this verse as saguna (with material qualities), leads to meditation on the actual form of Narayana/Krishna, described here as nirguna (without material qualities).

This latter meditation on the spiritual form of Gopala Krishna accompanied by the chanting of the Gopala mantra results in mature realization of Parabrahman—his form, qualities, and pastimes—from the vantage point of one’s particular service identity. What Narayana has recommended in this section for those not qualified to engage in such internal meditation is a method of fixing the mind on himself in conjunction with the world of the senses—the external universe. Contemplation of the worldly creation as the body of Narayana by identifying aspects of it with his spiritual form leads naturally to internal meditation on that form.