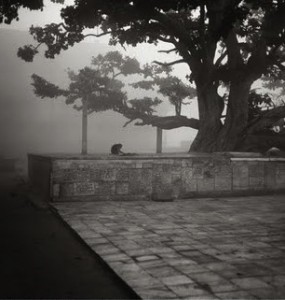 The lotus-born Brahma asked: How is it possible for the manifest murtis of the Lord that were previously mentioned to have ornaments? And how do gods such as the Rudras, Brahma, the sons of Brahma, the Vinayakas, the twelve Adityas, the Vasus, and the Gandharvas worship them? Which murti returns to his own abode and which remains after disappearance? Which murti do human beings worship?

Brahma wants to know in what manner the gods worship these deities. The word va (or) implies that he also wants to know which gods worship which Deities. His confusion arises partly from the teaching that Narayana/Krishna is worshipable by everyone, while previously, in verse 33, it was mentioned that certain gods worship certain Deities. Brahma also wants to better understand Narayana’s description of the tenth, eleventh, and twelfth deities of the Mathura forests, who were respectively described as being invisible (antardhane), as having returned to Vaikuntha (sva-pade), and as remaining on the earth (bhumisthe) and being worshiped by humans.

Lord Narayana said to Brahma: The twelve originally unmanifest forms are present in all worlds, among all gods and all humans.

Here Narayana responds to the first question: “How can these deities be decorated when they are unmanifest in form?” Narayana tells Brahma that these deities, while unmanifest in the sense that they only manifest to those who worship them, are nonetheless eternally existing in all worlds among both gods and humans. They are adya, original, or eternally existing without beginning. Sri Jiva Goswami comments that the word adya means anadi-siddha, “existing in the same perfect state without any beginning.” He adds that the word avyakta means that they are unmanifest to anyone other than those who worship them and that the word tisthanti underscores the idea that these deities are manifest only to their worshipers.

Thus Brahma’s first question concerning how deities that are unmanifest can be ornamented is answered by Narayana in conjunction with describing how they are worshiped by the various gods. By their worship, the deities become manifest. If Brahma’s question is how the twelve manifest deities can be worshiped when the teaching thus far has emphasized the exclusive worship of the one Supreme Brahman—a question about how one deity can also be many—Narayana begins his answer in this verse and concludes it in the following one.

I am worshiped by the Rudras in my form as Rudra, on Brahmaloka as Brahma, to the gods as God, to humans as a human. Among the Vinayakas my form is that of the remover of obstacles, Ganesa; to the Adityas I am light; to the Gandharvas I appear as a Gandharva; to the Apsaras I appear as Gau, whose form is revealed in song; to the Vasus I appear as the desirable Vasavi; and after I disappear, I then appear in the invisible form Aprakasini [or the form that sometimes reveals itself, Prakasini].

These twelve forms are different manifestations of the same God as he appears to specific groups of worshipers. Their appearance and ornamentation reflect the hearts of their devotees. The many forms of the one God are one with the pure hearts of his devotees. God is fully present within love of God, and there is no meaning to God independent of love of God. Indeed, we are well advised to venerate love of God more than God himself.

This truth accounts for the spiritual bias that fuels the liberated worlds of sacred aesthetic rapture (rasananda). Thus this obscure yet important section of Gopala-tapani provides a sruti reference for this experience of the Vaisnavas.

The word gauh, which usually means “cow,” is the cause of some confusion. Does this mean that God appears to the Apsaras as a cow? Prabodhananda Saraswati solves this problem in the following way: “The word gauh should be understood here to be derived from the verbal root gai, ‘to sing.’ The name thus means ‘one whose form is revealed by song.’ ” It is explained here that the deity described as invisible is called Prakasini, visible only in the heart of his devotees. The deity that remains on earth is the one worshiped by the human beings who are Brahman-realized.

The murti that is sometimes manifest and sometimes unmanifest remains in his own abode. His forms, whether human or in the modes of ignorance, passion, or goodness, are the embodiment of spiritual realization and joy, and are permanently situated in bhakti-yoga, exclusively characterized by eternity, knowledge, and bliss.

More details are given here about the deity who in texts 33 and 75 was described as having gone to his own abode (Vaikuntha). Prabodhananda Saraswati comments that this murti, which is “sometimes manifest and sometimes unmanifest,” occasionally descends to this world and at other times remains situated in his own abode (sva-pade). The word sva-pade is taken as significant by Sri Prabodhananda and indicates that in his opinion this Deity is the source of Mathura’s other eleven deities. “His own abode” is Goloka, which, Sri Prabodhananda says, is a special manifestation of earthly Vrndavana.

Sri Prabodhananda hears this deity speaking about his manifest and unmanifest pastimes in Vrindavana in the following verses, which he attributes to the Gautamiya-tantra:26

This beautiful land of Vrindavana is my eternal abode. The woods that extend for five yojanas are veritably my own body. The Kalindi River, which flows through it, is the Susumna channel that carries the currents of pure nectar. Living there in subtle form are the gods and other beings, and I, who am the essence of all the gods, never abandon this wood at any time. In every age, I am sometimes manifest and sometimes unmanifest, but this effulgent, transcendental aspect of my abode is not perceptible to the mundane sense of sight.

Although his different forms appearing in the world are apparently in different modes of nature (animal forms, godly forms, and so on), they are not under the influence of material nature. His form is described here as being “the embodiment of spiritual realization and joy” and “permanently situated in bhakti-yoga, exclusively characterized by eternity, knowledge, and bliss.”

He can be perceived in the pure condition of bhakti-yoga by those who have knowledge (vijnana) characterized by realization of his form, qualities, and pastimes, which are the antithesis of unconscious matter. In explaining this, Prabodhananda Saraswati comments that the word ghanah in this verse means “solid” or “dense,” and thus ananda-ghanah means “solidified spiritual energy” or “spiritual energy that has taken form.” Ananda-ghanah (solidified joy) also indicates a form that is the antithesis of all distress. As Krishna is constituted of eternity, knowledge, and bliss, so too is pure devotion.