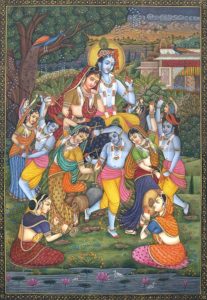 Om. Gopala transcends the three states of consciousness: wakefulness, dream, and deep sleep; he is even beyond the fourth state of divine consciousness. Om, this is the truth throughout the three worlds. I offer repeated obeisances to him who is verily the soul of prana.

Among the Hindu sages, consciousness is generally considered to encompass four dimensions: waking (jagrata), dreaming (svapna), dreamless deep sleep (susupti), and transcendence, referred to simply as the “fourth” (turiya). Each dimension represents a successively more profound experience of the nature of being.

The first two dimensions represent the experience of the physical and mental planes, in which consciousness perceives itself through the medium of the senses and the mind. The physical world is the world of everyday experience, and the mental world is the world of greater possibilities drawn from the experience of the physical or waking state but not limited by its jurisdiction. It affords a greater sense of the freedom that corresponds with the nature of the self. Each of these dimensions, however, conceals to a large extent the possibility of the soul, which exists independently of the senses and mental system. Should these two—the mind and senses—shut down, the soul itself can rest.

In a limited way, we experience this in dreamless deep sleep. Similarly, when the world of physical and mental experience begins to withdraw and ultimately shut down, as the expansion of the world represented by the outgoing breath of Visnu reverses with his inhalation, all materially conditioned souls enter susupti. In dreamless deep sleep, they exist in restful experience independent of the world of the mind and senses until the world again manifests. At that time in conformance with the constraints of karma under which they are still bound, all materially conditioned souls again enter the stream of life. If they are fortunate, in one of their innumerable lives they can reach the shore of transcendence, the fourth dimension: turiya, self- and God-realization. In this dimension, being is experienced from the vantage point of the Godhead.

Gopala-tapani, however, seeks to take us to a fifth dimension, and thus here in its next-to-concluding words it states, turyatito gopalah. Moksa, liberation, including devotional liberation, is turiya (the fourth dimension), but Vraja prema in which Gopala Krishna is realized is beyond the “fourth.” It is the fifth goal of life, pañcama-purusartha—prema vastu. This prema, or selfless, spontaneous love, is the highest ideal, to which Gopala Krishna bows and through which he is realized.

One Supreme Deity is hidden in every living being. He is the all-pervading, indwelling soul of all creatures. He is the director of the activities of creation, the resort of all beings, the witness, and consciousness, unique and free from material qualities. ((This text is also found in Svetasvatara Upanisad 6.11.))

In his conversation with Narayana, Brahma questioned how the singular Supreme Brahman can at the same time be fourfold, as in the case of the catur-vyuha. In this verse Narayana anticipates further doubts from Brahma regarding the Supreme Soul’s becoming many, as in the case of the innumerable jiva souls. How does he do so? Here Narayana explains that he enters into each soul and hides within them. Taittiriya Upanisad (2.6.1) states that Brahman desired to become many, so ’kamoyata, bahu syam prajayeyeti. He then created and entered his creation, tat srstva tad evanupravisat. He became the many souls and also entered into them, where he hides waiting to be discovered as the jiva realizes its brightest prospect in life: to meet its master and know his love.

Because God is all-pervasive, his entrance into the world is different from that of ordinary jivas, who are limited by time and space. Such jivas perceive the material sky to be all-pervasive, but God’s all-pervasiveness is not merely like that of the sky, for he is indwelling at the same time that he is all-pervading. He rests in the heart of all jivas, and indeed, within every atom of material existence, while he simultaneously pervades the entirety of the material world. Furthermore, being the director of all beings, he is not like the God of the Mimamsakas, who sets up the world but remains uninvolved in it, allowing it to be ruled by the principle of karma. Because he is the resort of all beings, no being is equal to him, unlike what the Nyaya philosophers hold. He is both the efficient and ingredient cause of the world. He is not transformed from his transcendent status into the world of matter, for he is witness to it all and thus remains unchanged. The world is the transformation of his sakti. He, being nirguna, is pure consciousness free from material qualities and unique in that he possesses innumerable potencies.

In this text consisting of fourteen salutations, Narayana shows Brahma how to worship the one Supreme God as he appears in different forms. Sri Prabodhananda considers all the personalities mentioned to be vibhutis, or manifestations of God’s divine power. By this power, others are able to do God’s work.

After giving this most sacred hymn, Narayana accepted Brahma as a manifestation of himself and bestowed on him mastery over all creatures. Then Narayana disappeared.

With this and the following verse, Durvasa concludes his teaching to Gandharvi and the gopis, having recited the sacred conversation between Narayana and Brahma. He mentions here that after receiving Narayana’s instruction Brahma was empowered by him for the work of creation and thereby accepted by Narayana as an empowered manifestation of himself, avesavatara.

I have told you, Gandharvi, exactly what was said to Brahma, to Brahma’s sons, and to Narada, just as I have heard it. You and all the gopis may now go home.

Thus Gopala-tapani-sruti rests. May all who read it now go home following the teaching of this text, which points us in the proper direction. May Sri Prabodhananda Saraswati, Sri Jiva Goswami, Sri Visvanatha Cakravarti Thakura, Sri Baladeva Vidyabhusana, and the host of commentators whose work preceded this commentary be pleased with it. I offer it unto my divine guardians, Srila A. C. Bhaktivedanta Swami Prabhupada and Srila Bhakti Raksaka Sridhara Deva Goswami, on this Purnima day in the month of July 2003, which corresponds with the day commemorating the disappearance of Sri Sanatana Goswami, the divine architect of the Gaudiya sampradaya. May he also be pleased with this commentary and mercifully bestow sambandha-jñana on those who study it carefully in the mood of devotion to Sri Gaura-Gopala.