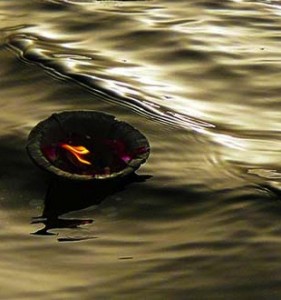 The following is another installment of our classroom series: Sri Upadesamrta, with Illuminations by Srila B. R. Sridhara Deva Goswami, published by Gosai Publishers, 2009. View past installments, here.

Eating too much or collecting more than necessary, performing extraneous endeavors that are against devotional service, speaking about mundane subject matters, neglecting the injunctions of the scriptures or blindly following scriptural injunctions, associating with mundane people and mental restlessness – these six things destroy devotional service.

Atyahara refers to whatever we collect, and also to feed oneself more than necessary. Whatever I collect, I want a portion of that thing. We are all busily engaged in collecting things for our sense satisfaction. Whatever we shall require, we can transform that into sense pleasure. Generally we fix things in such a way that we can collect the maximum money and with that money we earn some sense pleasure.

Our relationship with this mundane world should not be for sense pleasure, but we should work as much as required to keep this body fit. Money should be utilized not for sense pleasure but to satisfy our duty and the aim of our duty should not be to go downwards again but it will be for the apavarga—crossing these three necessities of life to seek for a higher purpose. Money should help us to discharge our duty and duty should be arranged in such a way that we shall inquire about our self and the environment – “Who am I? Where am I? What is my aim in life? What is real satisfaction?”

A human being is meant to inquire about the Absolute Truth. Nothing else should be the goal of one’s activities.1

That is the only requirement for us and that should be our only aim. That should be the object of our life. By amassing money, the real principle is lost. If we are not genuine, then we will be carried away by money towards the exploiting world. Money may be collected, but that must be distributed for the service of the sampradaya, for the service of the Vaishnavas. Amassing money is a sign of deviation.

Generally the devotees should engage themselves in the subjects of the Lord, but in the Gaudiya Matha we find they are handling money, motorcars etc, but for what purpose?

It is to show what is the raga-patha. Generally it is thought that one must give up everything and only through internal love worship the Lord—not by external sources. Majesty and reverence are not necessary. But here we are extensively handling the wealth of the outer world. What is the meaning? The meaning is to show that the raga-patha is above all. The position of those that are followers of the raga-patha is very high. They have left everything and are taking the path of worshiping him in their heart. All this grandeur, all reverence, everything should go to serve them. Pujala raga-patha—everything has its fulfillment if it can be connected to worshiping the feet of those that are living in that plane. Majesty, awe, reverence, wealth—everything is only meant to serve those niskincanas who have made the Lord of love and beauty the all in all in their lives. The whole world must learn this for its own welfare, and to teach this to the world, the Gaudiya Matha is handling all these things.

While in Bombay one Bengali gentleman who was an officer in the mint asked me, “You have come to collect money but you are a very rich man.” I told him, “Yes, we say we are rich and we also say that we are beggars. Now we must come to some understanding. You say that we are very rich. Why, because we spend money like water? A man who has got so much money can spend his money like that. An ordinary man would agree that this must be superfluous money; otherwise a beggar would not spend money for such purposes. One who has got millions can throw away thousands for luxurious activities. You think we have got much money. But we say we are beggars with no money. Still we spend money in such a way. Now the question will come whether what we spend will be for a good purpose or a bad one. A doctor may not be wealthy, but he has got a motorcar because he can attend many patients thereby—this is not a luxury. Generally men will think that one who has got a car or a plane must be a moneyman of high order, then only can he keep such things. But for business purposes he may keep such things. A doctor may have many patients he can visit by motorcar. We also use things in that way. You may think that it is superfluous to decorate the Deity, but we think that this is the fulfillment of life. All good things must be used to serve Narayana. That is our creed. Beggars we are, but still we spend money like water—for decoration, for festivals, for distribution of prasadam. We beg money and we spend lavishly, but not for ourselves. We feel the necessity of our particular nature. The real question is how we spend the money, not how much money we have got. We are poor beggars; still we spend money like a rich man. A rich man would be afraid to spend money like that.” Wealth only has its fulfillment in the service of those that are above this monetary world. The greatest goal possible is to worship the Lord and connect Him with this world.

It is mentioned in Bhakti-rasamrta-sindhu that it is prohibited to endeavor to build temples and all these things on a grand scale.

One should keep a distance from those who are averse to the Lord, avoid accepting too many disciples and not be overly enthusiastic about initiating great projects.2

When our Guru Maharaja was delivering lectures on the sixty- four kinds of devotion I marked that this is prohibited in Bhakti-rasamrta-sindhu but he was doing the same thing. On a big scale he was making propaganda. He was spending money in great quantities to construct temples and other things. That which has been prohibited by Rupa Gosvami, our Guru Maharaja had undertaken all those things. What would he say when this point comes up? He told, “Cut your coat according to your cloth.” This is a point of personal capacity. One man can manage an empire and he may find time for much leisure, and another man cannot even manage his own family of two or five members—the whole time he is engrossed there and becomes mad to manage that family. It is all a question of personal capacity.

Bhaktivinoda Thakura has written that there are two types of people. One reads and collects many things in the form of advice and understanding but cannot find the gist, the very substance of the thing. The other is the saragrahi who collects the very gist of everything and eliminates the burden. The saragrahi is the highest class of devotee. Externally he may be managing the government and society, but internally perhaps he is a gopi of Vrindavana. There he is another. He is doing his duty. In that way externally he is a king or he is a general. He is fighting. Such a double function one may have sometimes. In Bhaktivinoda Thakura’s Bengali translation of this verse from Upadeasamrta he says, visaya-prayasa, which means a false errand, an enthusiastic attempt for something undesirable. To prefer a life of devouring each other and disturbing each other, that is undesirable. That is maya.

There are two kinds of created beings in this world, godly and demoniac. Those dedicated to the devotional service of Lord Vishnu are godly, and those opposed to such service are demoniac.3

This is in Vishnu Purana. And in Gita:

The Vaisnava is also struggling, but to be reinstated into a harmonious life. That should be known here – all should struggle to be reinstated into the real harmony of the whole. Sincerely we should pray to the Lord, and we will find his help in no time. Then, in our innermost hearts, we shall find our connection with the fundamental plane of loving service to the Sweet Absolute. Then we shall find that the Lord of love is Krishna, the beautiful reality.

When a beginner is trying to conquer his senses, at that time he cannot avoid struggle. Progress means struggle of different types. Generally the time of trouble begins at the stage of the madhyama-adhikari. At the lower stage of the kanistha-adhikari, one does not measure how much devotion he is getting or not. With a peaceful mind he is engaged in arcana etc. But at the madhyama-adhikari stage, a real struggle begins in ones life. How to adjust—not only as advised by the scriptures, but also our social position, our relationship with the world, with the society, with education etc. The tendency to preach for propaganda comes at this stage. The madhyama-adhikari wants to extend himself and remove the difficulties in his environment and tries to convert the environment for that purpose. The madhyama-adhikari is a life of struggle and when he reaches the stage of uttama- adhikari, then he becomes peaceful in life. He sees everywhere that things are going well according to the will of Krishna. Very easily he can see the will of Krishna everywhere, so he has not much to struggle for. But when living in this ignorant plane of misconception, he acquires harmony by seeing both things – maya, and Isvara. He wants to install God consciousness, and he tries his hardest to remove the misconceptions. That is a period of struggle. Sadhana-dasa—this stage is full of struggle. Then when he comes to the stage of apana-dasa, he feels peaceful in bhava-bhakti and then prema-bhakti.

But there is again another struggle when he is already in lila. That is in another plane. In Vrindavana there is also competition, there is also struggle. Yasoda will think how to control this naughty child, “I failed. I can’t manage him.” In this way there is some sort of a struggle, but that is produced by yogamaya. Prema-bhakti is also dynamic in character, not static. Where there is something dynamic, there is some struggle. The competition is there. There is a play in the sakhya-rasa, two parties—one party wants to conquer another party. One says Krishna, another says Balarama. That is also a struggle. But that is purely of another type; that is transcendental play. And in madhurya-rasa also there are several parties – Radharani’s party, Candravali’s party, so many parties there are. And the servitors of every party are to manage for their own interest, the interest of their mistress.

That type of dynamic character means some sort of struggle, a sweet struggle. And here in this plane it is bitter. Here we have to struggle to remove the nescience and to invite pure knowledge. This struggle is a little bitter – not only that, it is tasteless and painful sometimes. But when we enter that higher arena, the struggle becomes more sweet. Lila means a sort of struggle.