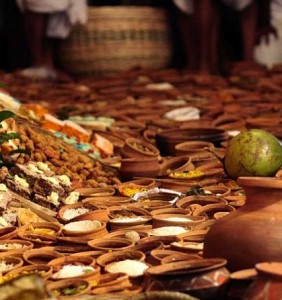 The following is an installment of our classroom series: Sri Upadesamrta, with Illuminations by Srila B. R. Sridhara Deva Goswami, published by Gosai Publishers, 2009. View past installments, here.

Bhunkte – to feed the sadhu and supply what is necessary to keep up his life, and bhojayate – receiving prasadam from him. What is prasadam? Prasadam is the grace of Krishna, the will of Krishna. Whatever comes from the Infinite should be considered as grace. And whatever we do should be with the spirit of service. Not with the result of trade – na sa bhrtyah sa vai vanik. We shall do anything and everything with the aim of serving the Infinite. With clean hands we shall do his work. With clean hands – not contaminated by any consequence. Service and prasada are corresponding. Whatever comes from the infinite environment, that is prasada, grace.

Once Professor Sanyal, who wrote the English book Sri Krishna Caitanya, was challenged by his younger brother, who was perhaps a graduate. He told him,

“What do you do there in your matha? What we do, you also do in the matha.”
“No, no, we don’t do what you do.”
“You do not eat?”
“No, we don’t eat.”
“I have seen you with my own eyes – you are eating.”
“No, we don’t eat like you – devouring solid things, putting into the stomach. We don’t do that. We serve maha-prasadam. It is beyond your understanding what we do. We don’t eat like you. There is no spirit of consumption. We don’t consume anything. We honor the remnants of the Lord. That is what we do.”

Such will be the difference of all the activities of the true Vaishnava and the worldly man. For self-preservation, we create havoc in the environment. Exploitation. The first principle of exploitation begins with self-preservation. That means eating. If we can solve that problem, we can almost solve everything.

By honoring the Lord’s prasadam I conquer all worldly illusions.1

Bhaktivinoda Thakura says that the key to the solution to this mundane life is in prasada. It is in our attitude in dealing with the environment – in the most primitive necessity that we can’t avoid maintaining and keeping this body and soul together. The first necessity in life is this. And if I can solve that problem, I have solved the whole thing. Prasada karite haya sakala prapanca jaya – the most important problem is to learn how we should take prasadam, to maintain our own self. Our life depends mainly on prapanca jaya (conquering over worldly illusion). We cannot but consume, we cannot but create devastation in the environment by eating whatever – either creeper or grass or seed or anything. Microscopic worms are being killed. How to get rid of this karmika reaction?

All activities are meant for the sake of sacrifice to Vishnu. Other than that, all other activities bind one to this material world.2

We must successfully connect our activities with the Supreme satisfaction, for which everything is meant. All existence is meant to fulfill his pleasure, and if one does so, then his life will be fulfilled. If I offer something, really I am to collect something for his satisfaction, and cook and offer it to him. That should be the real purpose. And then, because I am to serve him, I must take something out of that. The main thing will be to collect things, to cook and to offer them to him according to the scriptures where he has expressed his will. That is the process. And then to take. When he takes then the reaction, the poison, has already gone to him, and like Mahadeva, he can digest anything. Not only that, but whatever has gone to his connection gets promotion. There is no himsa (violence). Himsa is not himsa because, that which is apparently violently treated gets higher promotion through my actions. I get some reward also for that. And then what shall I take? I won’t take from this world, but I shall take from my master, as his free grace to me.

The word prasada means anugraha, kindness or grace. Whatever service I do, I expect nothing in return. And what I get is his grace – a free transaction. I shall take prasada then I shall be out of all entanglement, although I am in the midst of it. In every action I disturb the environment, but it is meant for him. Then there is no reaction, but the opposite reaction occurs, and it will save others also. Through me, such waves will emanate outside. Those waves will help others also to be purified. Everyone must be a purifying agent through the godliness that is in their hearts. God is on the throne of the heart and thereby he will emanate a ray – such a fine ray that will purify the environment.

Self Surrender to the Prime Cause

Tad vidham priti-laksanam – these are six ways that we generally attain the association of a sadhu. If we follow these guidelines we shall come closer to a person. If we deal in these ways with a bad man we shall become bad, and with a good man we shall become good. There are two types of water: filtered and filthy. Filthy water can be purified. The higher sadhus can take evil thoughts from others without becoming contaminated. In their hearts resides Govinda. Govinda is infinite and he can consume any quantity of filthy things, therefore their hearts cannot be contaminated.

If we get the association of a real sadhu even for a moment, then that may turn the direction of our life. A sadhu is like a very valuable gem. What he gives is far more valuable than anything in this world. One may have gems, diamonds, money, or a kingdom but they are not valuable to all. This is all mortal even though they may be valuable to a particular class of human thought. There are so many things in creation that are nothing to the sadhu. But anandam, sweetness, has a general value. It is necessary even for the tree, the creeper and even the stone. In whatever position the seeker may be in, he will be highly satisfied.

Yasmin prapti sarvam idam praptam bhavati – if we get a little of that, we think that, “No other thing but this can satisfy me. This is the thing for which I have been striving for after so many lives together. Now I have found the object of my search.” We can find higher things only through the connection of service. If we want the association of things of a higher type then we must offer ourselves to their service. We must keep this broad thought always in mind. I cannot utilize it as if it is my servant. But I shall offer to be a servant of him, if I really want his association. Only through service can I be connected with him. I shall work for his interest. His interest will be more valuable than that of mine.

To become the slave of Krishna is not a joke. That impossible thought that, “I am Brahman!” That is the greatest disease. “I am the biggest and I want to be the monarch of all I survey” means “I am the most heinous exploiting agent.” We are so eager to get imperial service, we are so eager to get a higher service in the administration, but to get service in the highest management of the Supreme Lord – that is the most dignified thing. The Gaudiya Matha stands for the dignity of the human race! What is the human race? They are like the mist, like the trees, creepers, and worms – the prey of death. The king will also have to die helplessly, the big general, the politician – all will have to go and face death for eternity. But the Gaudiya Matha stands for the eternal dignified position – friendly service to the Supreme Entity. The Gaudiya Matha says complete self-abnegation, self-surrender to the prime cause. To give is divine and the aspiration that, “I can get,” that is devilish. “I want to lord it over everything” – that is a devilish spirit. But Krishna is such that slavery to him is the highest attainment for us in his relationship. That is not easily achieved.