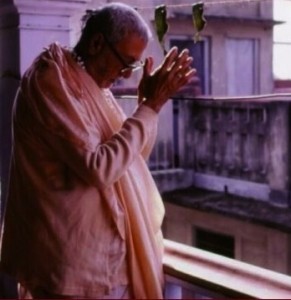 The following is an installment of our classroom series: Sri Upadesamrta, with Illuminations by Srila B. R. Sridhara Deva Goswami, published by Gosai Publishers, 2009. View past installments, here.

There are also four types of namabhasa, or shadow expressions of the holy name that can give mukti. They may take us to the abscissa from the negative side, but they cannot give any positive attainment. There is neither any exploiting tendency there, nor any serving tendency—that is a marginal position. The four kinds of namabhasa are sanketa, parihasa, stobha and hela.

One who chants the holy name of the Lord is at once freed from all the reactions of unlimited sins, even if he chants indirectly (sanketa), jokingly (parihasa), for musical entertainment (stobha), or even neglectfully (helana). All the learned scholars of the scriptures accept this.1

Sanketa refers to when we outwardly say something, but in our mind a different thing comes in connection to that. Just as in the story of Ajamila in the Bhagavatam. Ajamila was afraid of the dreadful appearance of the Yamadutas. In his coma he could remember that his young son Narayana was playing nearby. With that faint memory he wanted to call out for his son, Narayana. But in the meantime a change came in his mind and he thought, “What can this little boy Narayana do against those fearful agents of Yamaraja?” Then Lord Narayana’s name came. First it began as the name of his child, but then it changed into the name of the Lord. At once four agents came down from Vaikuntha. There was a serious talk between the Vishnudutas and the Yamadutas. The Yamadutas were sent back defeated and Ajamila attained liberation. All his previous attraction towards his family at once vanished and he woke up from the bed and directly traveled towards Haridvara. There he began to chant the Holy Name of Narayana and after sometime he attained Vaikuntha. This is sanketa.

Parihasa means to chant the holy name in a joking mood or to ridicule a person. One is chanting Hare Krishna and another gentleman may remark, “Suddenly you have become such a great devotee! You are chanting Hare Krishna Hare Krishna!” He is simply cutting a joke with his friend. If one is ridiculing the Hare Krishna devotees in the street, and says “Hare Krishna,” that may be namabhasa if it is connected with his previous pious credits. Another form of namabhasa is stobha—to use the holy name with some other intention. Sometimes these words, Narayana, or Krishna may be used for some technical meaning, or for a code word. Jiva Goswami has taken advantage of this in his book of Sanskrit grammar, the Harinamamrta-vyakarana. When one is playing the mrdanga, using the names of “Gaura-Nitai, Gaura-Nitai” to represent different drumbeats, it may be namabhasa. Hela means without any attention, only through a slack habit.

Suppose when rising from the bed, we yawn and say, “Hare Krishna”—it is not devoted or attentive. It is automatic, without attention – some reflex action. That is Hela. We are asked to avoid both namaparadha and namabhasa. We must avoid these two with the earnestness of attaining the service of the Lord, as well as his servitors. Hankering for that positive thing must be in our hankering. With this idea as far as possible, we should go on taking the holy name and that will be suddha-nama. Everything else should be eliminated and the real name, which is one and the same with the Lord, should be taken. But the real name must be received from a real sadhu.

Sadhu–sanga is Rarely to be Found

There is no exertion by the uttama-adhikari Vaishnava to dismiss this world of matter; he has no connection with it. The madhyama-adhikari may have some consciousness of this mundane nature, but in the view of a paramahamsa, there is nothing but krsna-bhajana. If by your fortune you meet such a rare sadhu, then you will try to do anything and everything for him. But he is sudurlabha—rarely to be found. To reach a clear stage of understanding one’s own deeper necessity is not to be found anywhere and everywhere, Very few souls are found that are really conscious of their innermost necessity, “I want Krishna. I want Vrindavana.” Such sincere souls are not to be found very widely.

Amongst thousands of men, one may try to achieve perfection. Amongst those rare persons that endeavor for perfection, one may actually know me.2

The benefit of the association of such holy persons is very, very rarely to be found here. On the strength of that our Guru Maharaja invited all to come and join his mission to attain that most rare gem – sat-sanga-seva, the direct association and service of the sadhu. That cannot be had here and there. Without that, there is no possibility of advancement on the positive side. Give up everything and take this chance. The whole heart must be brave enough to take this opportunity. We must not waste our time. Our energy is wasted for maintaining children, wife, relatives and so many things, but we must come to give ourselves wholesale to Krishna under the guidance of a devotee. For name and fame and for a peaceful life don’t lose the chance. Why should we miss such a great opportunity to approach Krishna? If like a child learning to walk, we experience one or two falls, we should not be afraid of that. Whatever progress we make, that is a very valuable thing. Die to live. Learn to die if you live a real life. I cannot maintain my position in the future, for thus I shall lose the present. I shall lose all apprehension of my uncertain future. At present I am engaged in wasting time for maintaining this and that – the society, the wife, the children and so many things. Why should I lose my energy? Therefore Guru Maharaja opened so many centers. Sadhu-sanga is rarely to be found and he made arrangements for that indispensable necessity. That was revolutionary. When people cannot earn freedom of a country in a constitutional method, they take to the revolutionary path – they are prepared to incur loss, they are prepared for risk. Still they go towards the goal of freedom. Whatever we do, the whole thing must be utilized in the service of Krsna, under the guidance of a bona-fide sadhu. Whatever we do, the whole thing must be converted and then we will comprehend the value of everything, being under his guidance.

It is the opinion of all the scriptures that by even a moment’s association with a sadhu, one can attain all perfection.3

In so many places the importance of sadhu-sanga, is stressed. We are wandering, uncared for in eternal time and to get the slightest connection of a pure sadhu is most valuable, even it may be a little. That association will aggrandize itself; it will gradually develop and take me forcibly forwards. Through the sadhu I shall come in association with the scriptures, then surely I will go towards the positive land. The most important thing in life is to get the association of the Vaishnava – to come in contact with a real agent. Through him we are to negotiate our spiritual life.

Many years pass by imperceptibly for those who are intoxicated with the temporary pleasures of this transient world. It would be better if they experienced just one moment of clear consciousness where they realized that they are wasting their precious time and thus become earnest in attaining their supreme benefit.4

Sukadeva Goswami says, “One moment is sufficient for your highest attainment if it is utilized properly.” Varam muhurtam vidhitam – if one moment can be used sufficiently, then there is no necessity of a long, long life. Only one moment is sufficient to solve all the problems of your life, if it is properly used along with sadhu-sanga. The real capital is sadhu-sanga and your cooperation is required also. At all costs try to follow, to associate, to utilize that. One moment is sufficient. Kim pramatasya bahubhih paroksair hayanair iha – what is the necessity of ages and ages if we are unconscious of our own interest? If used properly, one moment is sufficient to solve the whole problem of our life for which we are eternally wandering. We must be wakeful to our interest; we must not be negligent. Mahaprabhu came to tell us what is our real interest within, “You do not want to know your own heart. You do not know that you are a foreigner to your own heart and its demand. This is the wealth within your heart. Try to find it out.” That is the direction of Mahaprabhu. “It is within you and you are to eliminate all foreign things from your heart, then you will find a temple of Krishna within. If you search your own heart, you will find Krishna there with the help of a proper guide. That is not a foreign thing to you. It is there. Every heart is a temple of the Lord. It is your home.” Therefore Mahaprabhu says, “Go on with sankirtana.” But it must by krsna–sankirtana and sankirtana of no other. For that, sadhu-sanga is necessary. It cannot be an empirical attempt but the attempt that descends from the higher place to help us here. We must have that connection – that is all-important.