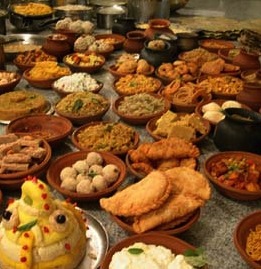 Sanga Q & A with Swami B. V. Tripurari

Q. Devotees are known for distributing delicious vegetarian food offered to Krishna with little or no charge to the public. In the West they have been doing this at their temples as well as at music festivals and other popular events for almost fifty years. Interestingly, Walter Isaacson’s biography of Steve Jobs relates how during his college years the late Apple co-founder regularly walked to the Krishna center in Portland, Oregon to chant, dance, and enjoy the free feast being served there. Lecturing at Stanford University, Jobs told students, “I would walk the seven miles across town every Sunday night to get one good meal a week at the Hare Krishna temple. I loved it.”

In India, along with prasadam distribution at temples and events, devotees work with government agencies in distributing food to the poor. One of their programs provides free prasadam lunches to thousands of impoverished school children daily.

Yet, in spite of the popularity of prasadam distribution, there are some in the Krishna movement who want to discontinue programs that don’t directly involve proselytizing for converts. Their argument is that food distribution unaccompanied by chanting (kirtana) and/or preaching is akin to secular social work where the interests of the body take precedence over those of the soul. Implementing this opinion might cause some prasadam programs for the poor in India to be discontinued. So my questions are: What is the spiritual understanding of prasadam, and do you feel that prasadam programs that don’t include chanting and preaching should be discontinued?

A. The word prasadam means mercy, kindness, or grace. If we collect, prepare, and offer food to Krishna before taking any ourselves, we convert our primal necessity for eating into a mystic experience that can lead us to the zenith of human potential—selfless love. This is because offering food to Krishna and distributing it to others, without expectation of reward, is a spiritual practice that brings our requirement for self-preservation into conjunction with our spiritual capacity to love. Spiritual practices like these can transform our lives because they serve to convert our selfish desires into a serving desire supported by the realization of our complete dependence upon God. Indeed, all of the karmic reactions for our present life of exploitation can be overcome by this practice because the most important activity in human life is to be engaged in the service of Krishna, who energizes our efforts through his remnants, his kindness, and grace (prasada).

Ideally, prasadam distribution is accompanied by kirtana and the opportunity for those who partake to learn something about devotion to Krishna (bhakti). This is how Srila Prabhupada established the Krishna consciousness movement in the West, and this reflects the age-old tradition of distributing prasadam at temples and religious functions in India. But even without being accompanied by kirtana or philosophy, prasada distribution is a potent spiritual act beneficial for both the giver and receiver. Indeed, anything—especially food—given from the hands of a pure Vaishnava or his or her representatives, whether or not it has been ritually offered to Krishna, is mercy/prasada for the baddha jiva, the conditioned soul.

The sruti says that food is Brahman; food is rasa; and Krishna says in the Bhagavad-gita, aham vaishvanaro bhutva: “I am the fire of digestion in everyone.” Feeding people with this in mind will make the giver one with Brahman as well. It will enable all those involved to eventually taste God as rasa.

Q. We Vaishnavas are theists who believe in a Supreme Being, not monists who believe that ultimately there is no distinction between God/Brahman and man. So what do you mean when you say that distributing prasadam will make the giver one with Brahman?

A. The scriptures speak of becoming one with Brahman. Whereas monists understand this to mean something equivalent to becoming God, Vaishnavas understand this to mean becoming one with God in desire and purpose—to become instruments of his will. We Vaishnavas are certainly interested in becoming one in desire with Brahman, in becoming fire so to speak, in order to enter the fire. Again, I am not speaking of monism, but rather the far-reaching philosophy of Sri Caitanya Mahaprabhu, who taught that the individual soul (jiva) is simultaneously one and different (acintya bhedabheda) from Brahman/God. In this realization the jiva experiences a transcendent oneness with Brahman in the context of sacrifice, service, and love.

When we offer food to God, do we not become one with him in love? When we distribute prasadam to others are they not involved in Sri Caitanya Mahaprabhu’s pastime of delivering the fallen souls—his pastime of love?

Devotees will attain love of God through offerings in which they feed others in the consciousness that they are offering food to Krishna, who dwells within as Paramatma, the Supersoul, or as Vaishvanara (the fire of digestion), as Krishna refers to himself in Bhagavad-gita. Food given to others from the hand of a Vaishnava, even if not ritualistically offered, is a form of prasada as well; and if one meditates on the fact that Krishna is the fire of digestion and if one also feeds this fire with devotion, one will become Krishna conscious by doing so. What to speak of distributing prasadam, Srila Prabhupada said that even alcoholics will make spiritual advancement if they see their intoxicating beverages in relation to Krishna. Srila Prabhupada said, “I may request even the drunkards, ‘When drinking wine, kindly remember that the taste of this drink is Krishna. Just begin in this way, and one day you will become a saintly, Krishna conscious person.’ ”

Q. Some devotees argue that performing charity such as feeding people is not genuine bhakti but rather an aspect of varnashram, or Vedic socio-religious life. They say that devotees will “fall away” if they become involved in charitable work devoid of bhakti.

A. Charity and feeding the needy fall within the purview of varnashrama dharma, which includes pious activities which may or may not be materially motivated, but this is not a very meaningful argument when the food distribution being discussed is in fact prasadam distribution. Bhakti and prasadam are synonymous. Bhakti means loving devotion to God, and prasadam is food that has been offered in loving devotion to God. Food without bhakti is not prasadam because it is bhakti that makes food prasadam. Therefore, distributing prasadam is bhakti—not varnashrama dharma. The claim that those distributing prasadam will fall away if the activity is not accompanied by kirtana and preaching fails to understand the nature of svarupa-siddha-bhakti, which affects one who participates in it whether that participation is knowing or unknowing. How can an activity that is svarupa-siddha-bhakti possibly have an adverse effect on those giving or receiving it? To think that it can is an offensive to bhakti.

Of course, it is preferable to include kirtana and preaching in prasadam distribution, and I would think that such an adjustment would be a minor thing in India. But all told, prasadam distribution in whatever form it takes is bhakti, and whosoever is touched by bhakti, even animals, plants, and trees, will be eternally spiritually benefited.

24 Responses to Sanga: Prasadam is Bhakti